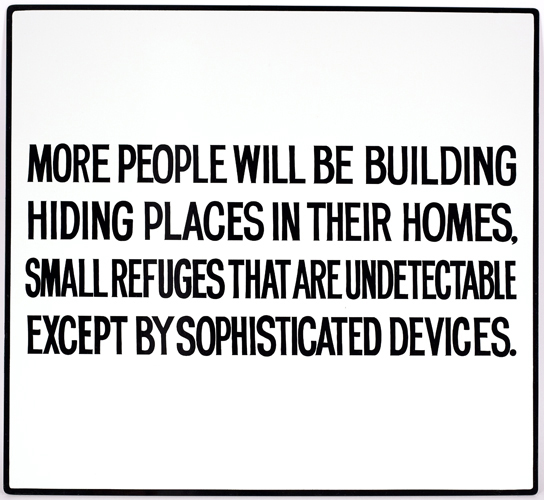 The large spray paint canvases on view at the gallery are the result of collaborations with New York graffiti artists Lady Pink and A-One, whose haunting images are supplemented with Holzer’s provocative statements. In I AM NOT FREE BECAUSE I CAN BE EXPLODED ANYTIME (1983-84), Holzer’s characteristically cryptic phrase is hand-lettered over a scene, spray painted by Pink, of bodies in despair. The collaborative works feature text from Survival, a series of cautionary texts, in which each sentence instructs, informs or questions the ways an individual responds to his or her social, physical, psychological and personal environments. Just as street art seeks to have an immediate impact on an unsuspecting public, the Survival phrases have an urgent tone, the sentences short and pointed so as to be instantly accessible to passersby.
The artist’s granite benches will be on display in the front gallery, inscribed with words from
the Living series (1980-1982), in which Holzer presents a set of quiet observations, directions, and warnings. The commentaries touch on how the individual negotiates landscapes, persons, rules, expectations, desires, fears, other bodies, one’s flesh, and one’s self. Holzer began working with stone in 1986. Her idea was to find a home for her texts that was resistant to the vagaries of time and destruction, as lasting as the light of her electronic signs is transitory. The bench form was selected because it offered people a place to sit and converse with others. The utility of the object allows her to insinuate texts that are not immediately consistent with the domestic or park-like settings where they might be placed.
Similarly delivering messages from the Living and Survival series will be a selection of vintage LED artworks, enamel on metal hand-painted signs, and cast plaques. Recognized as Holzer’s signature medium, electronic signs have been part of the artist’s practice since the early eighties, initially adopted for its association with news and advertising, and as a mode of direct address. The LED work Under a Rock (1986) features text from the series of the same name, here showcasing the words ‘Tick Tick’. Composed specifically for electronic signs and stone benches, this series explores the unmentionable as well as pain’s manifestations and persistence. The plaques and painted signs, installed in the rear gallery, recall those that often appear on historic buildings, lending the writing authority and a voice of the establishment.