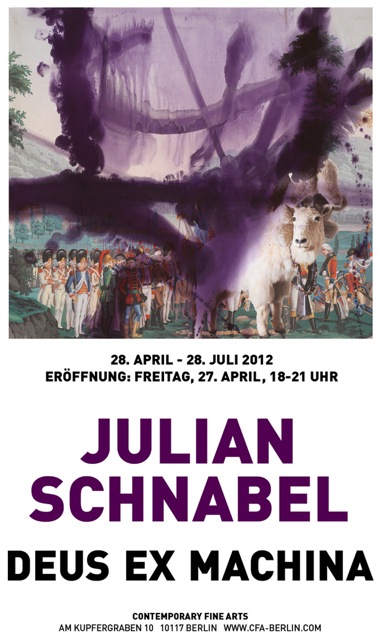 Julian Schnabel will be presenting his first major solo exhibition, since his retrospective in 2004, entitled Deus Ex Machina in Germany at the CFA Berlin from April 28-July 28.  The show consists largely of work that uses enlarged snapshots and photographs of images such as Indian deities, historic paintings, and Schnabel himself as the background on which he added and layered artistic materials.  Schnabel mixed the digital images with symbols, objects, words, all from various sources, and his own painting to create elements that inform and influence one another.  Schnabel used these materials and their history as “fragments of the world,” that reference their origins.  Schnabel said of his work, “using existing material adds an ethnographic aspect to the work in that it introduces a real place and a real time to the aesthetic reality.”  Robert Fleck, the curator of this exhibition, described Schnabel’s work as, “grasp[ing] the media image by its horns and, with his painterly modifications, bring[ing] it to its knees.”

Schnabel first made a name for himself in the art world with his “plate paintings,” consisting of large-scale paintings done on broken ceramic plates.   Schnabel showed his work at the Venice Biennale in 1980, quickly becaming a major figure in the Neo-expressionist movement.  He is most famously quoted as saying, “I’m the closest thing to Picasso that you’ll see in this f-ing life.”  Schnabel’s work is now in the collections of important museums throughout the world, including The Metropolitain Museum of Art, the Museum of Modern Art, The Whitney Museum of American Art, The Museum of Contemporary Art in Los Angeles, the Tate Modern, and the Centre Georges Pompidou.  Outside of the art world, Schnabel is best known for the films he’s directed, which include Basquiat, Before Night Falls, for which Javier Bardem was nominated for an Academy Award, and The Diving Bell and the Butterfly, which was nominated for four Academy Awards.