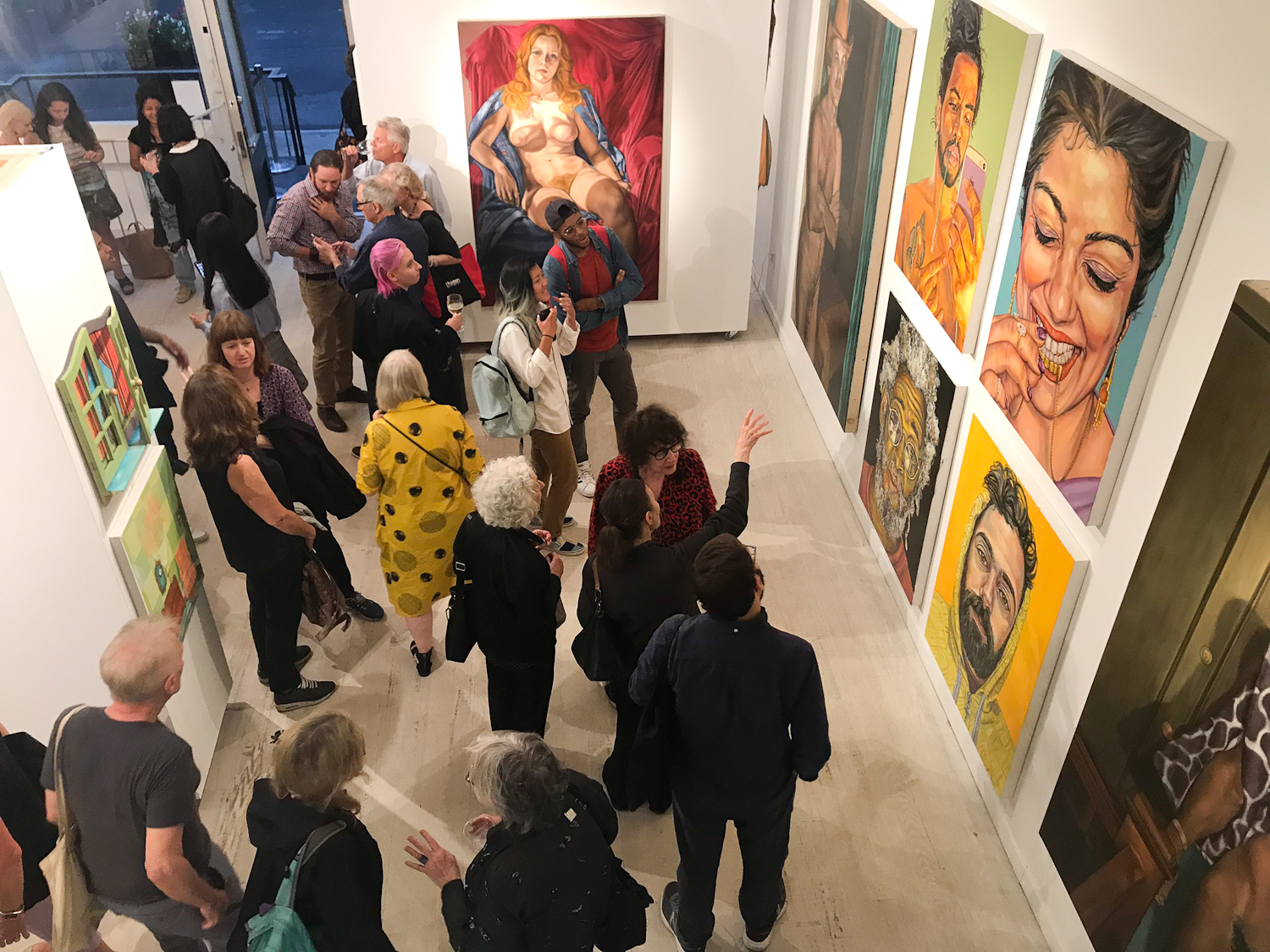 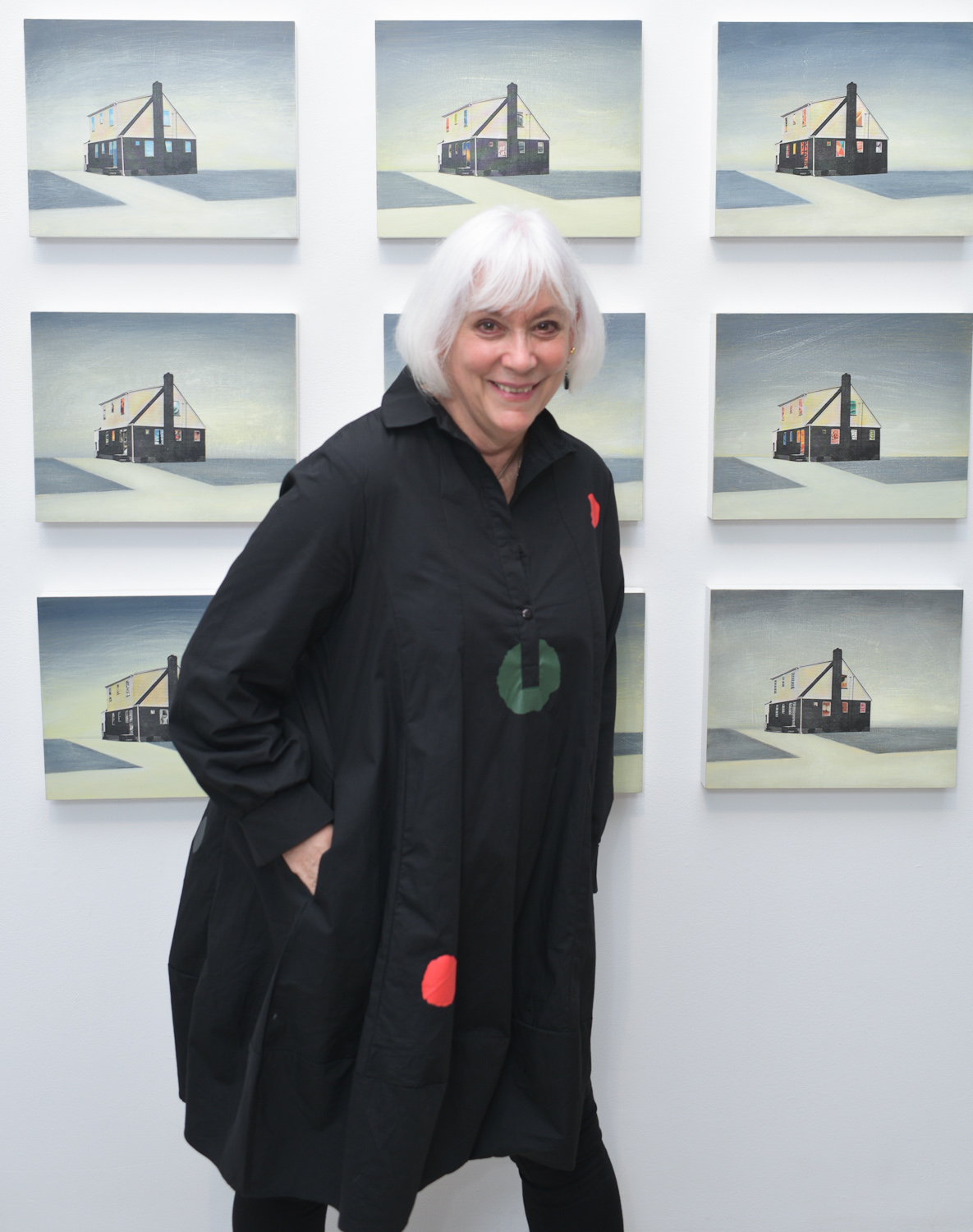 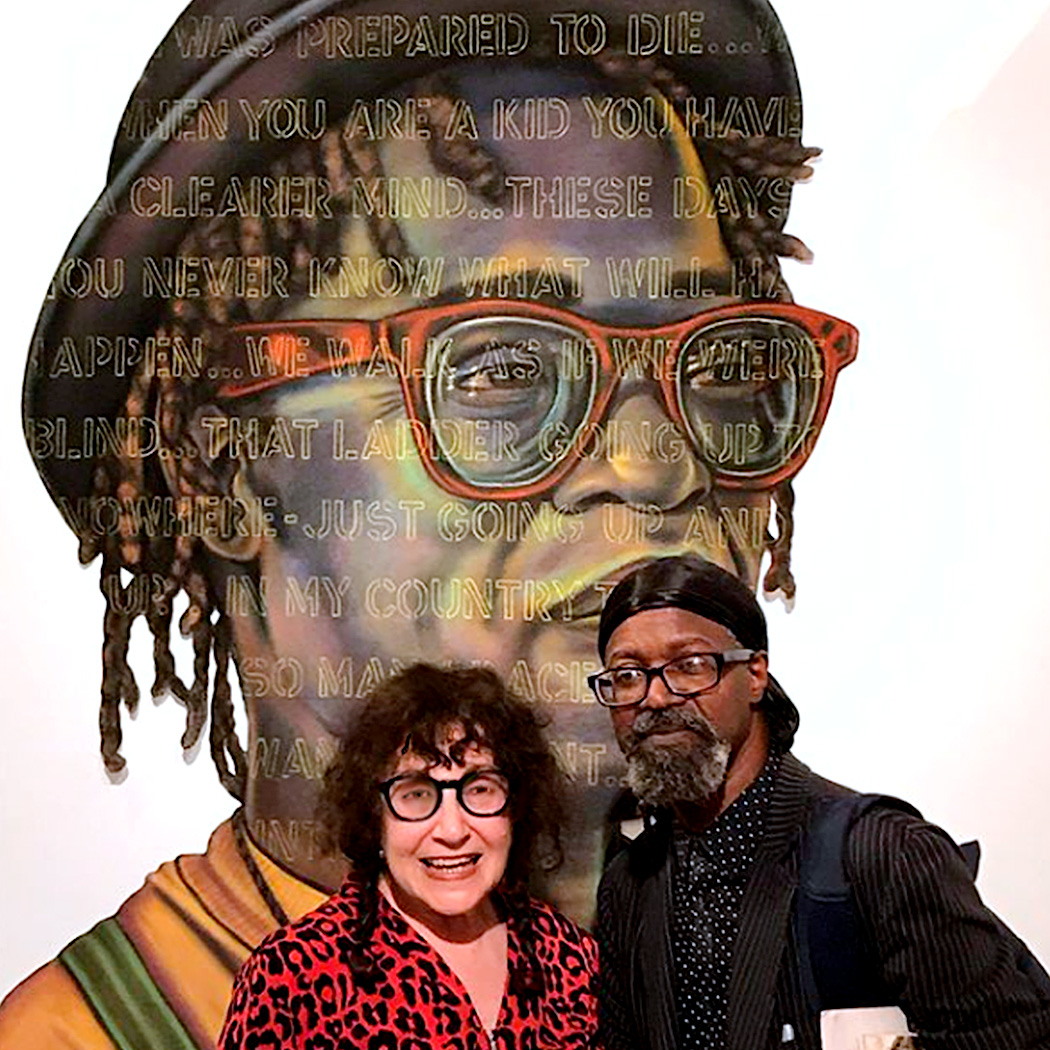 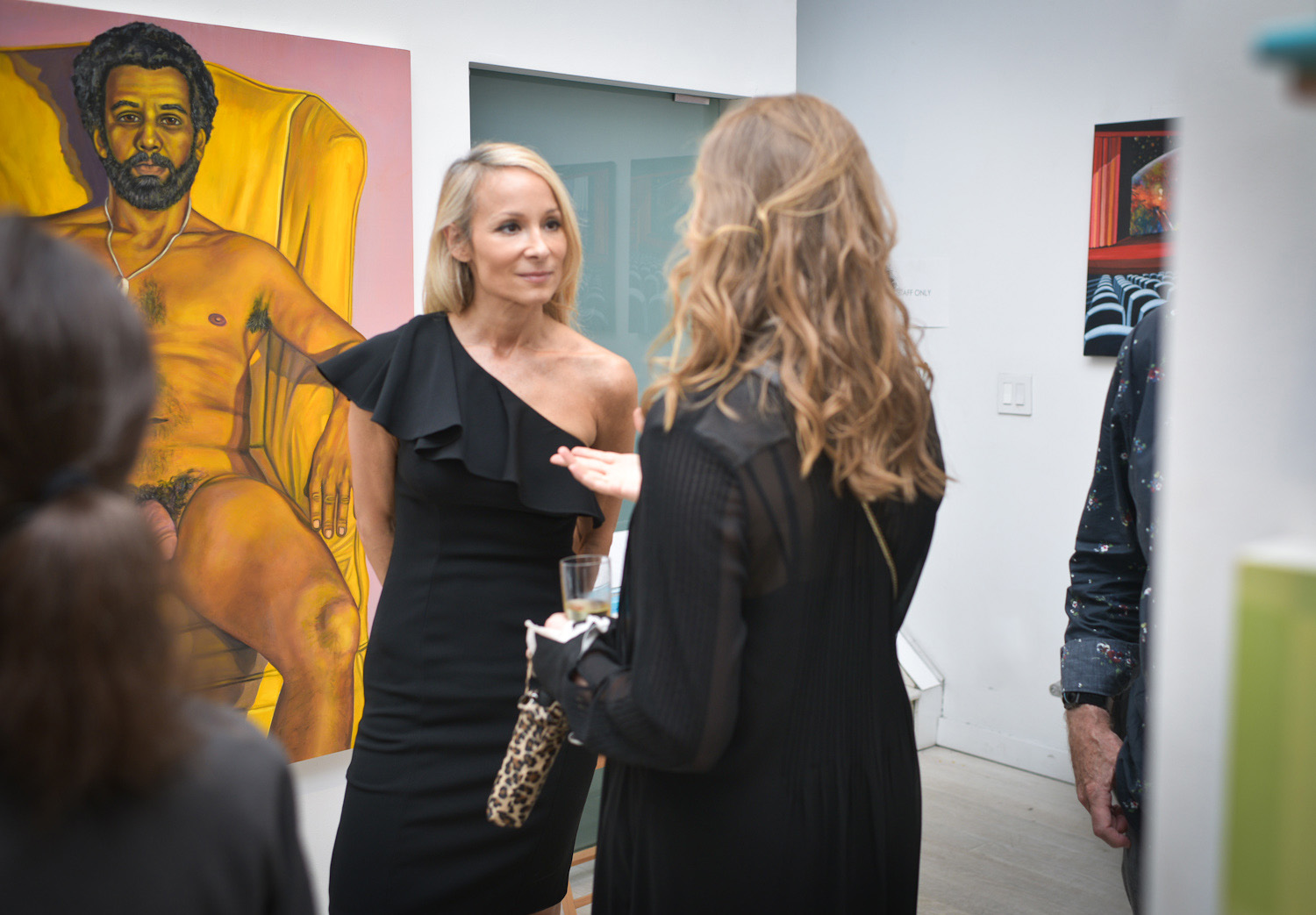 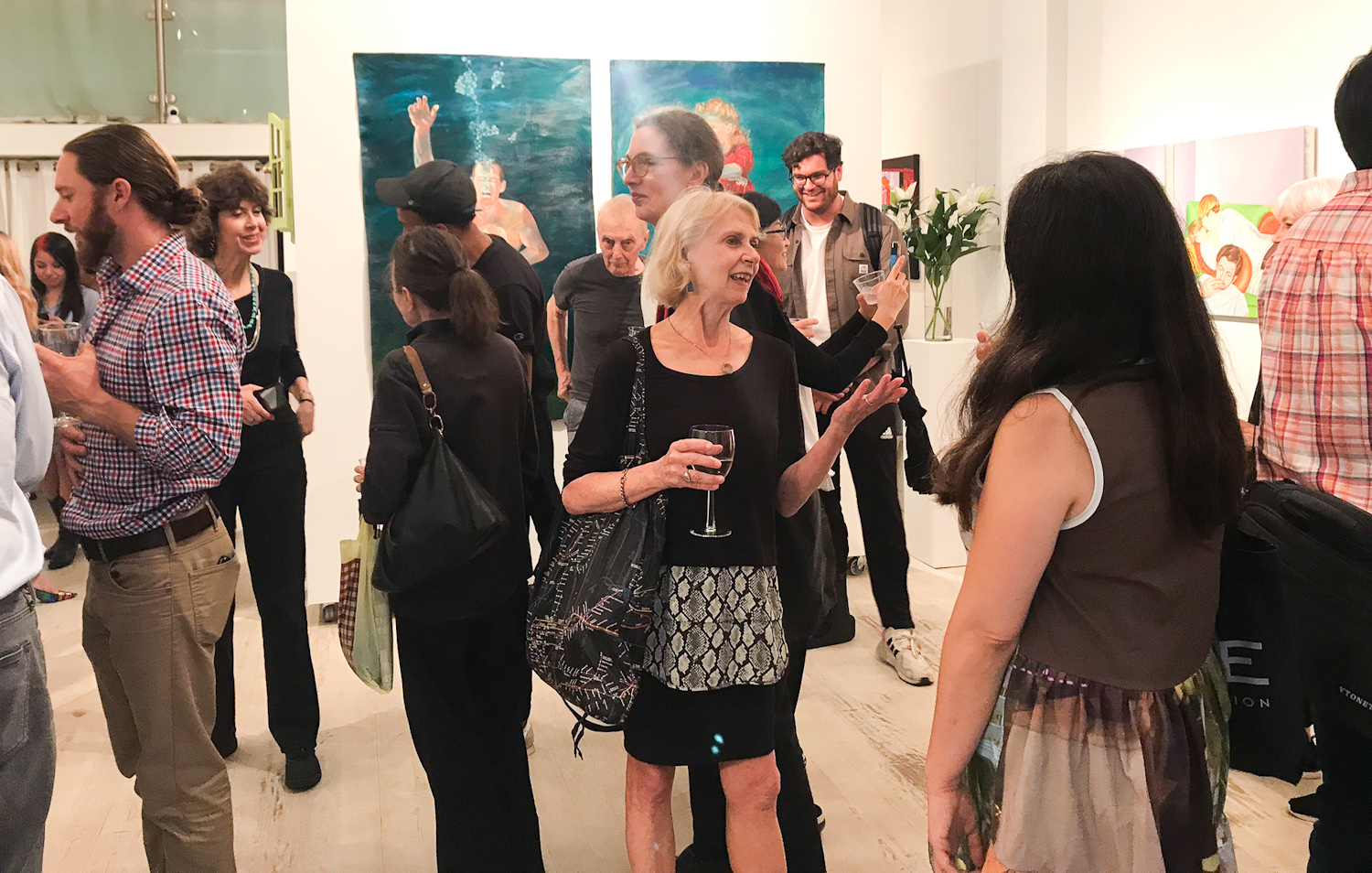 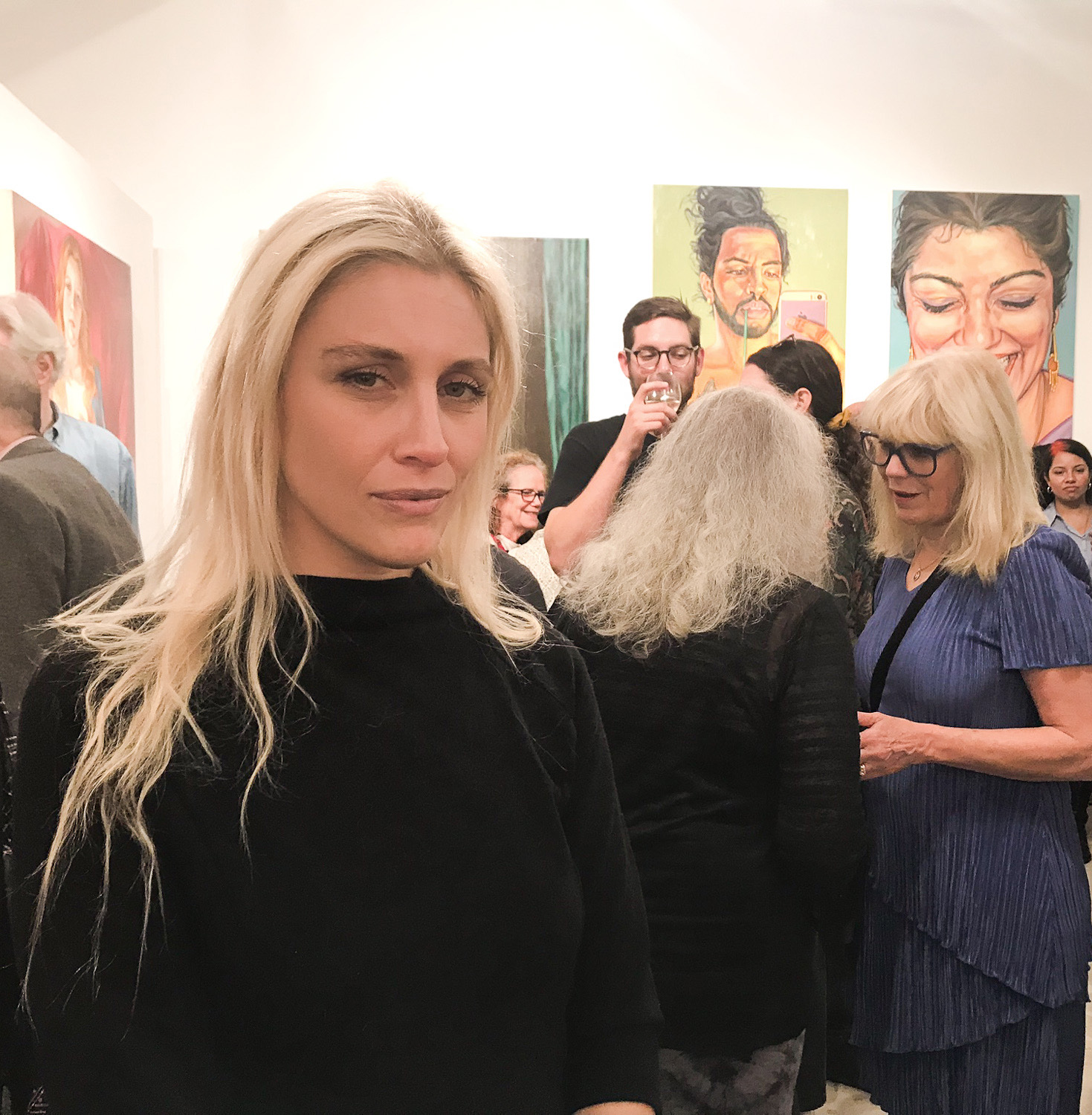 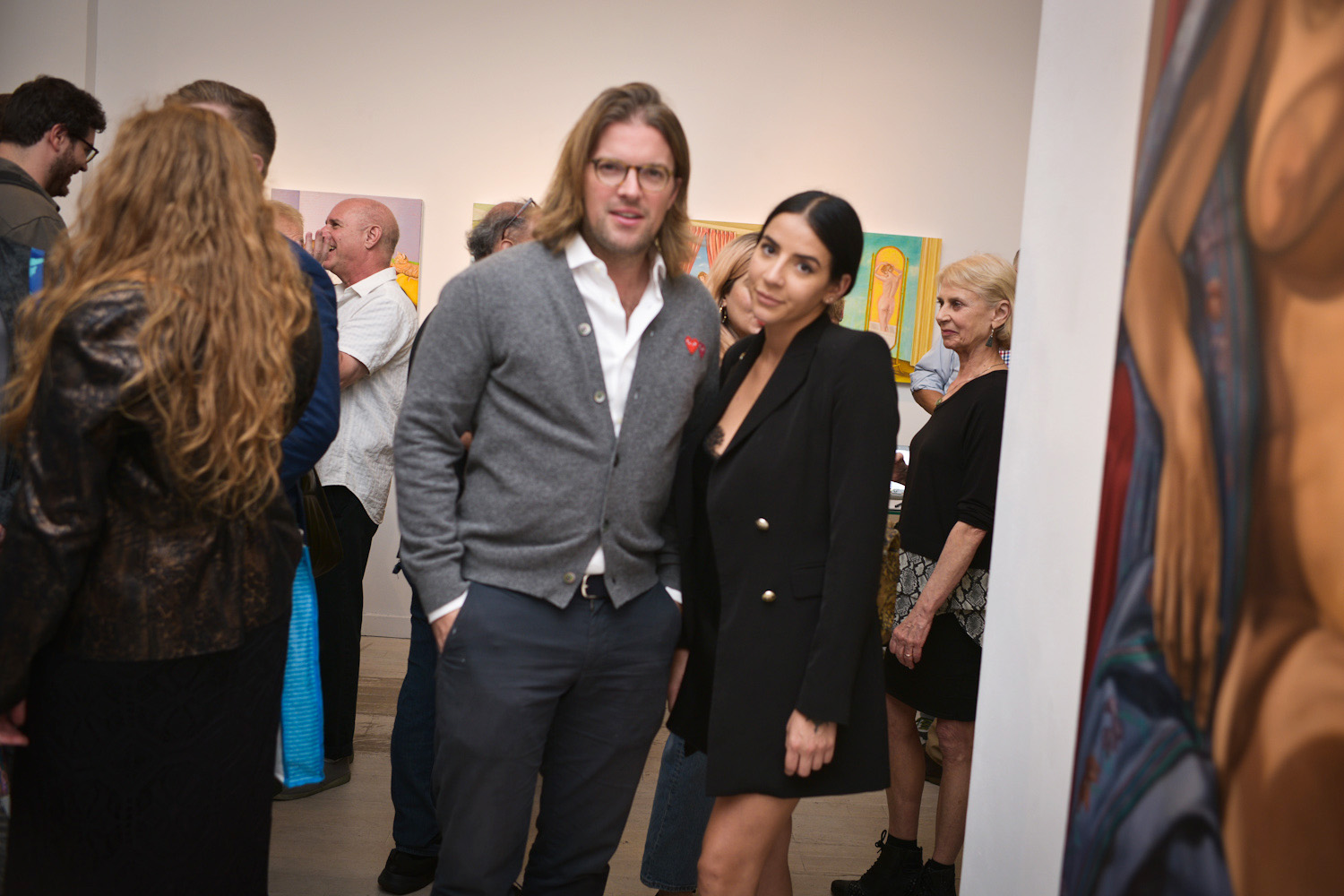 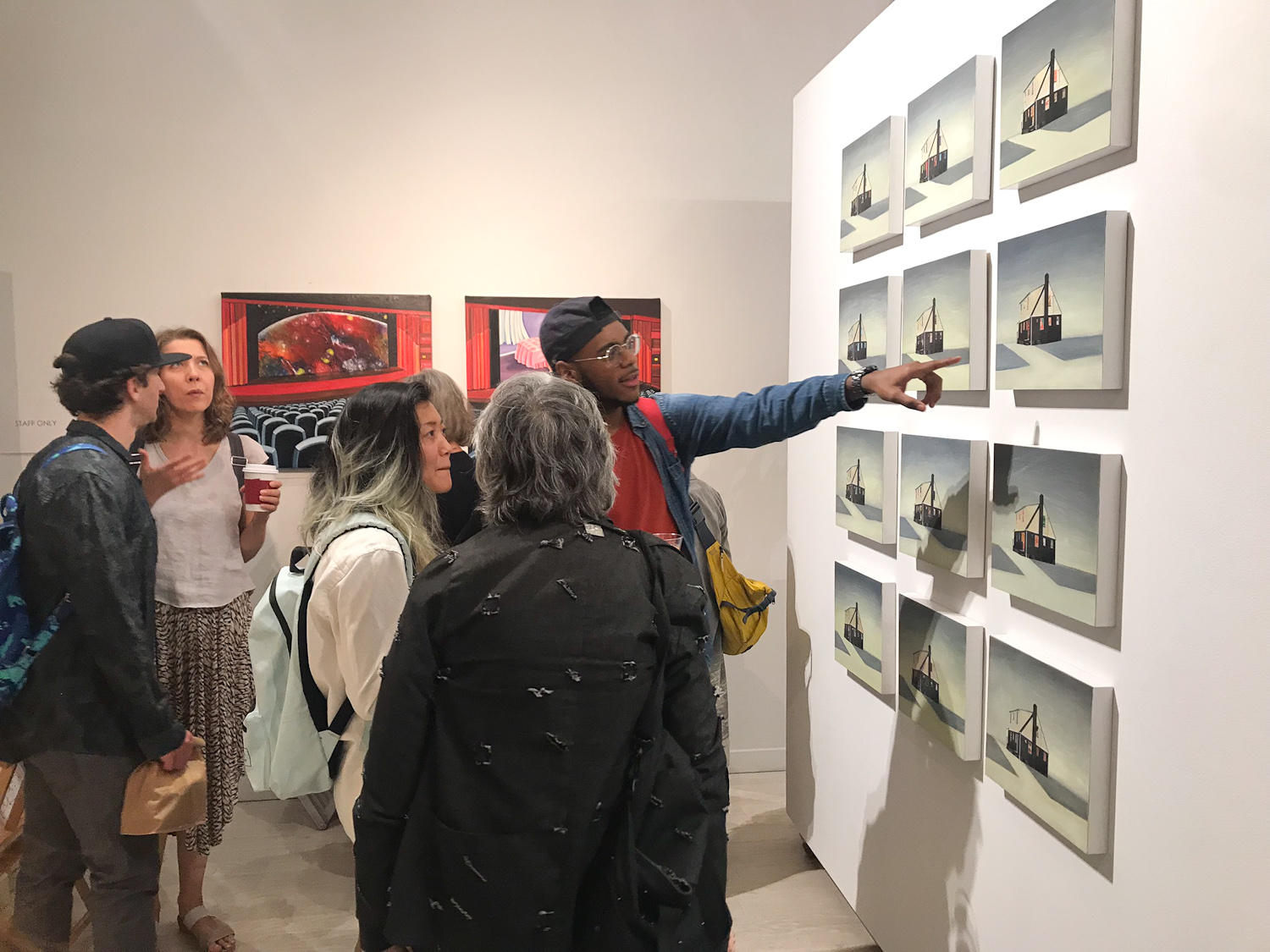 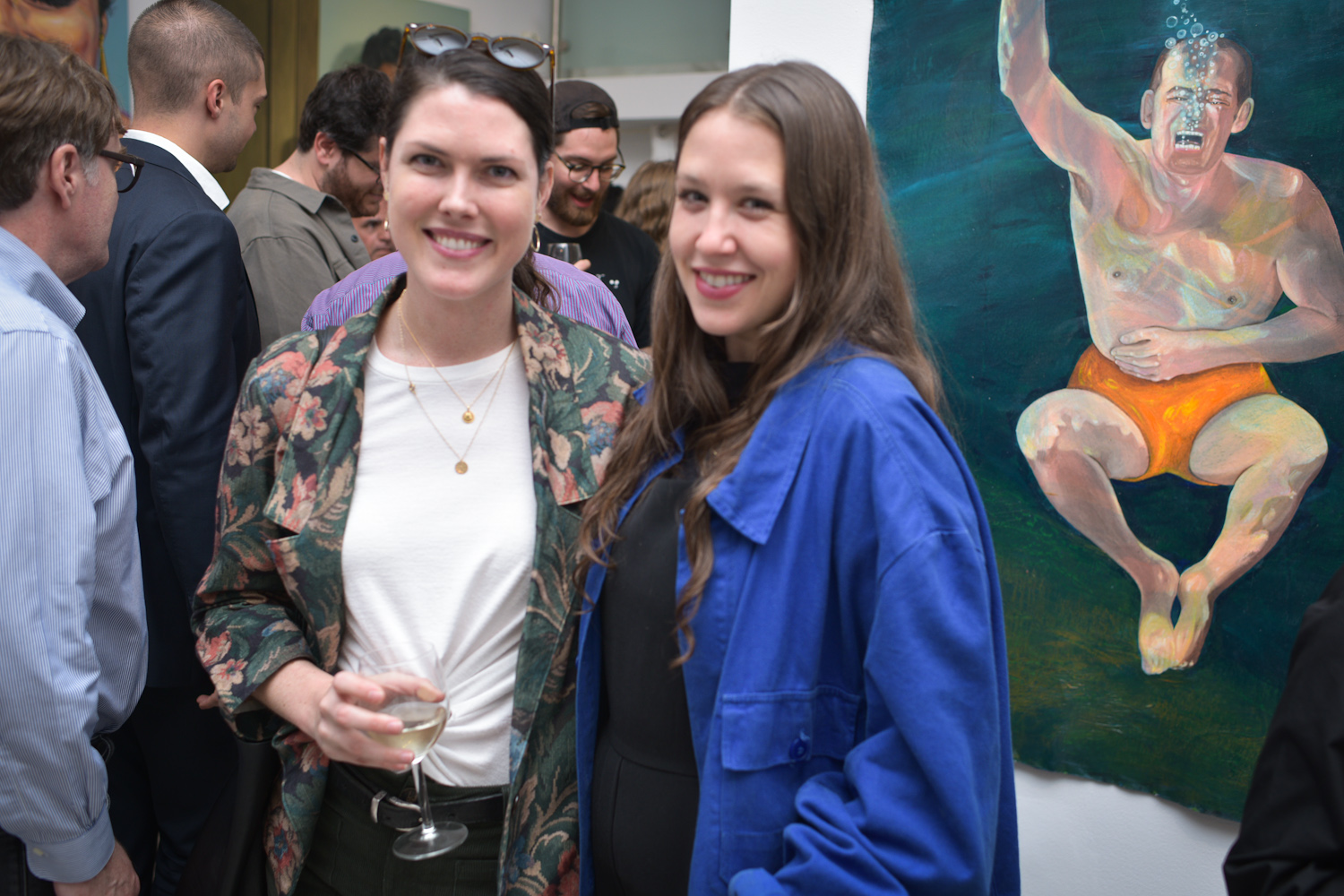 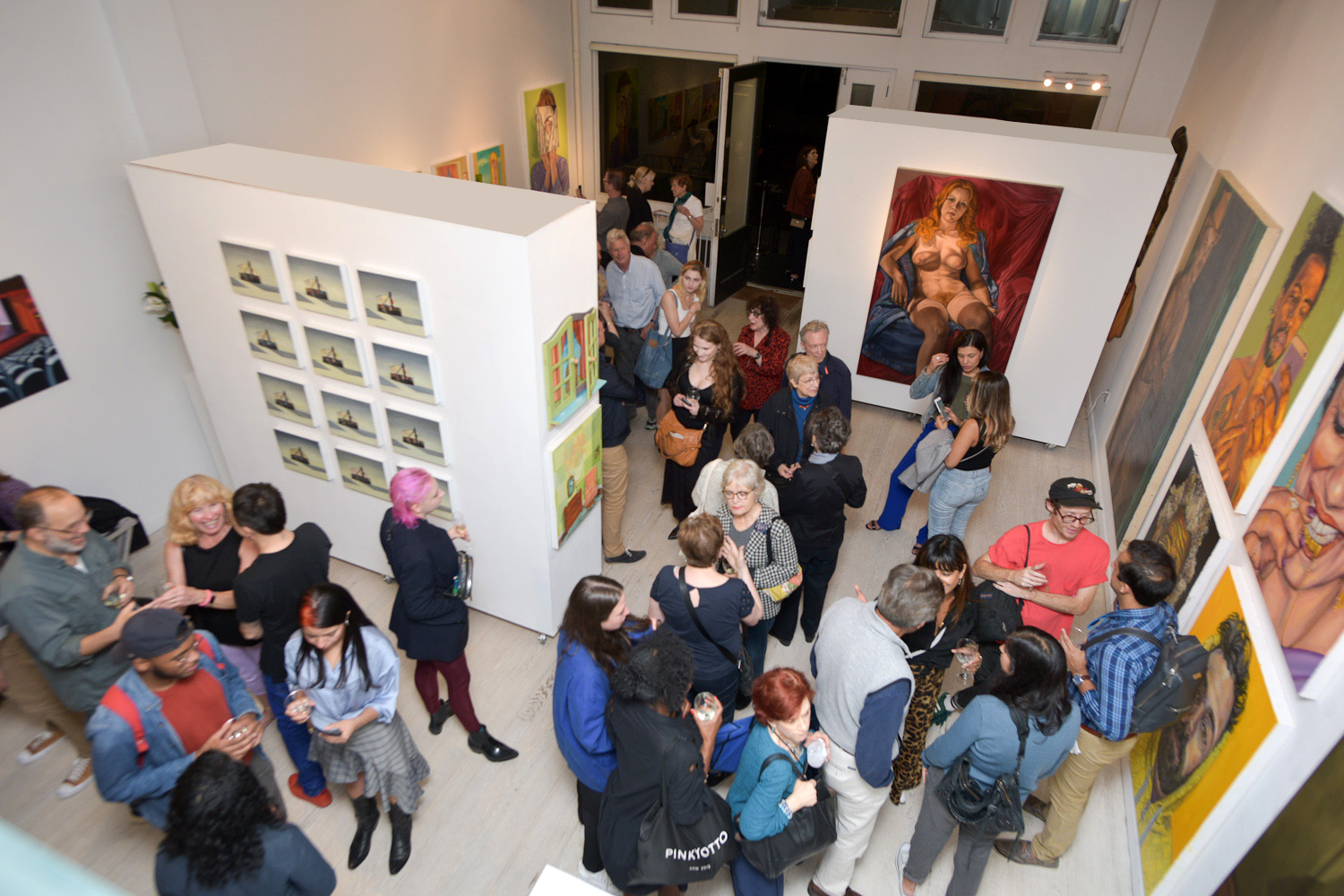 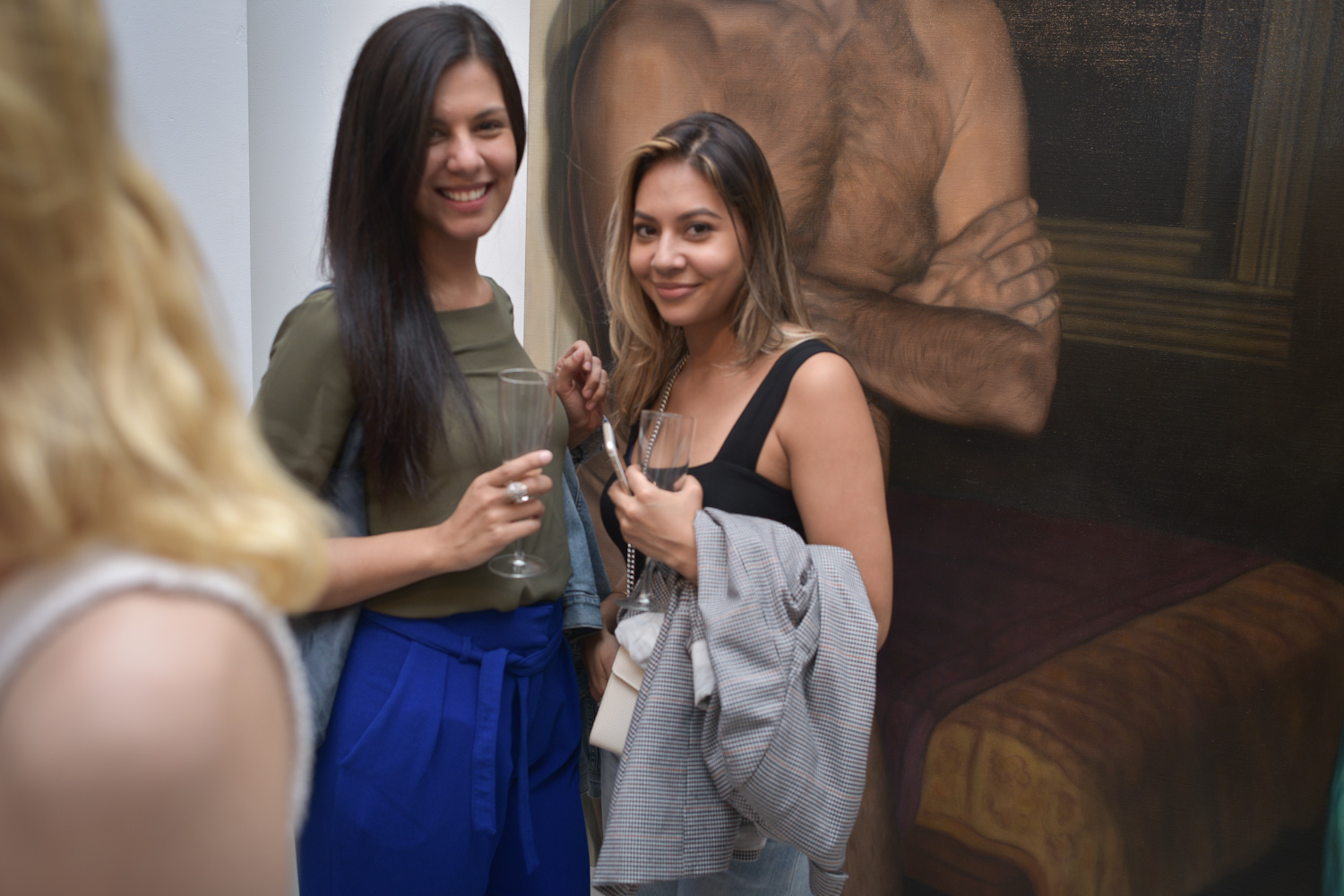 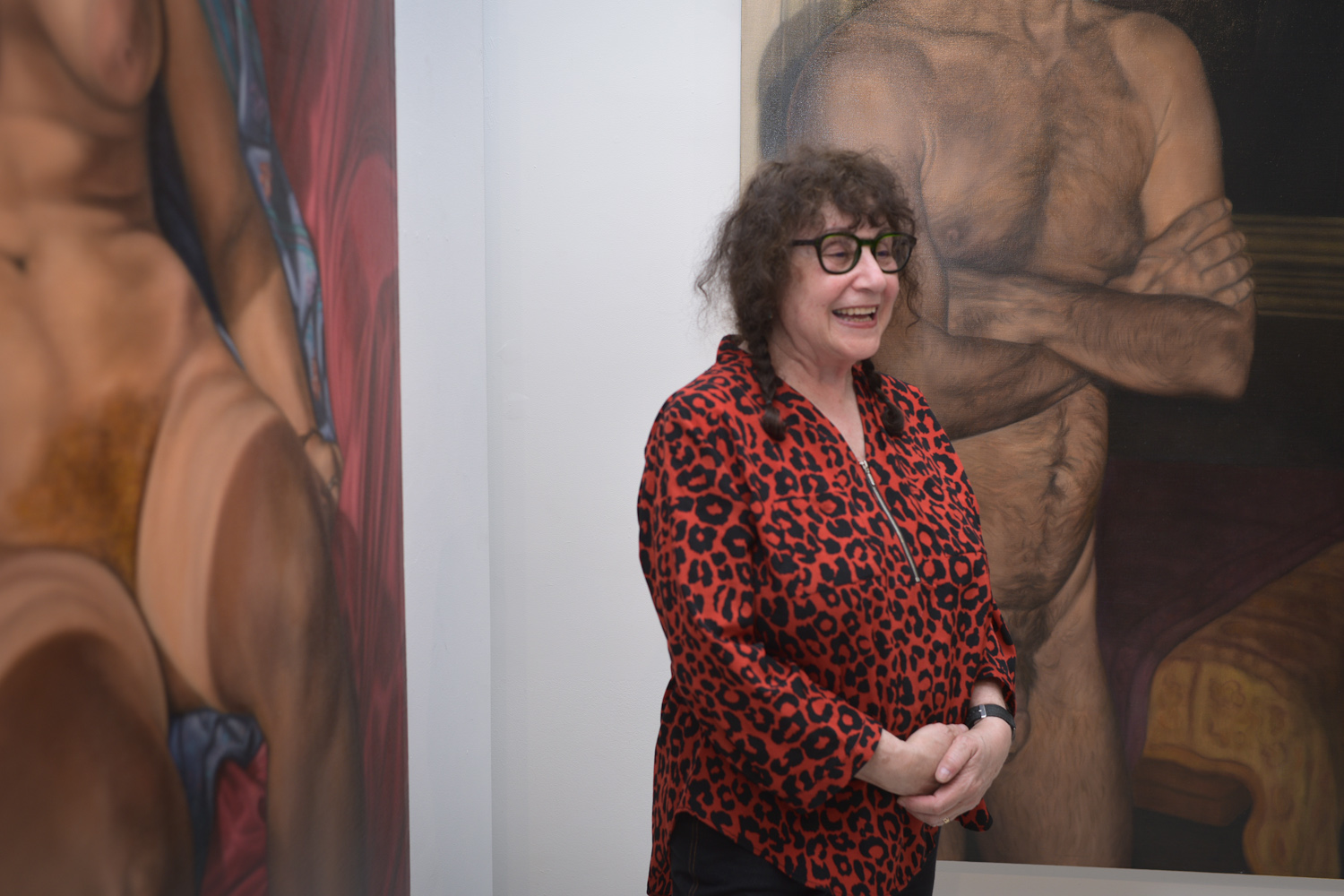 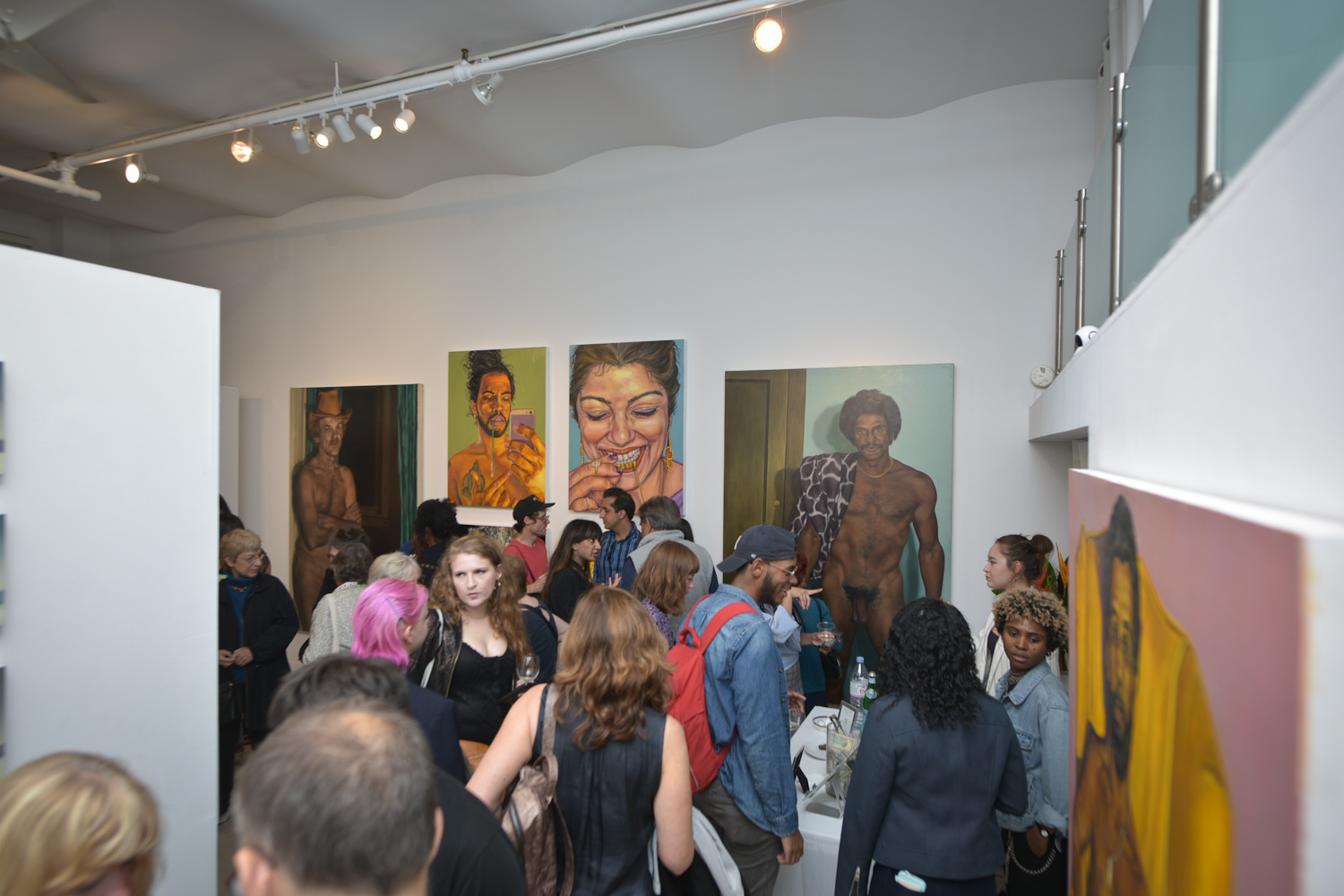 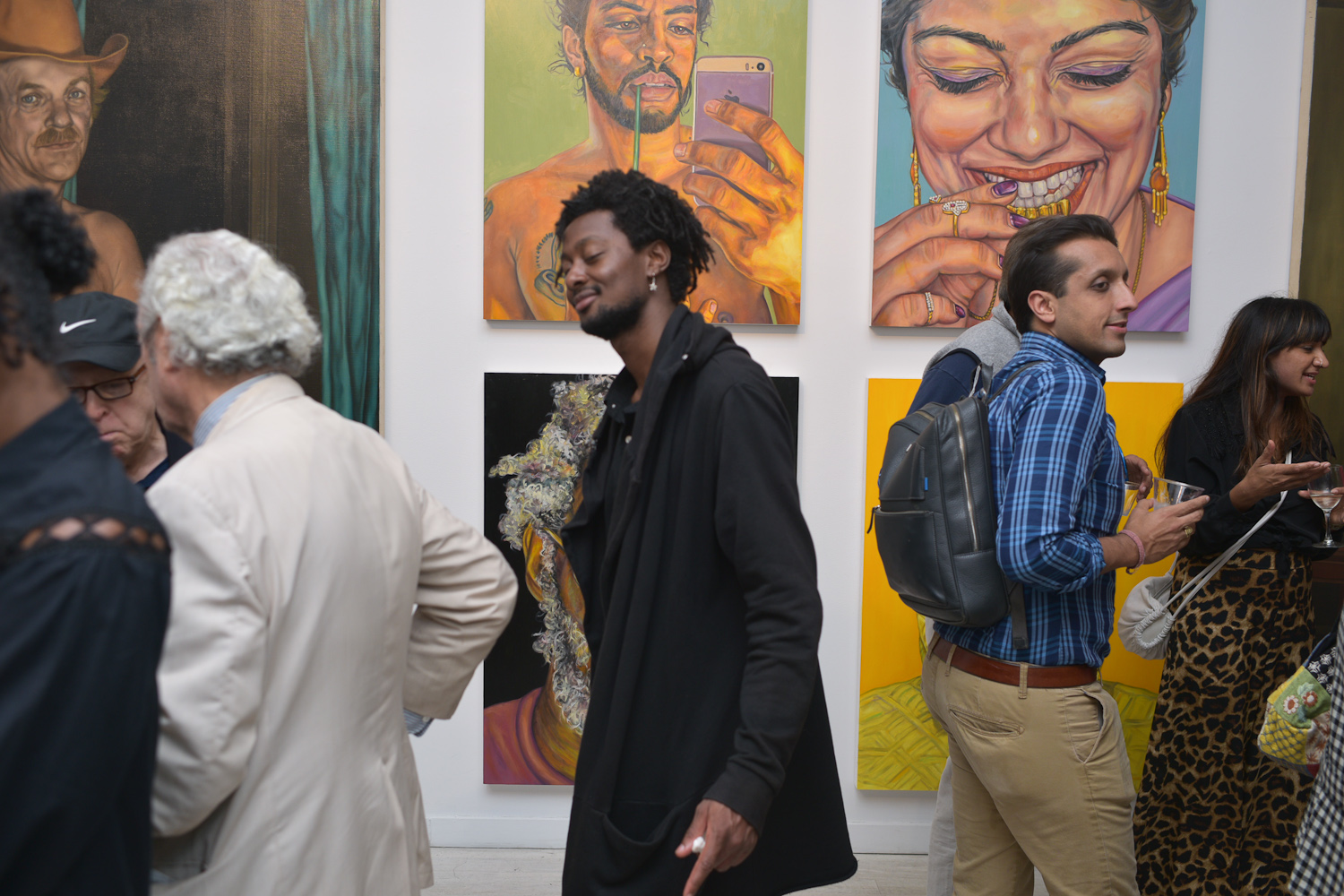 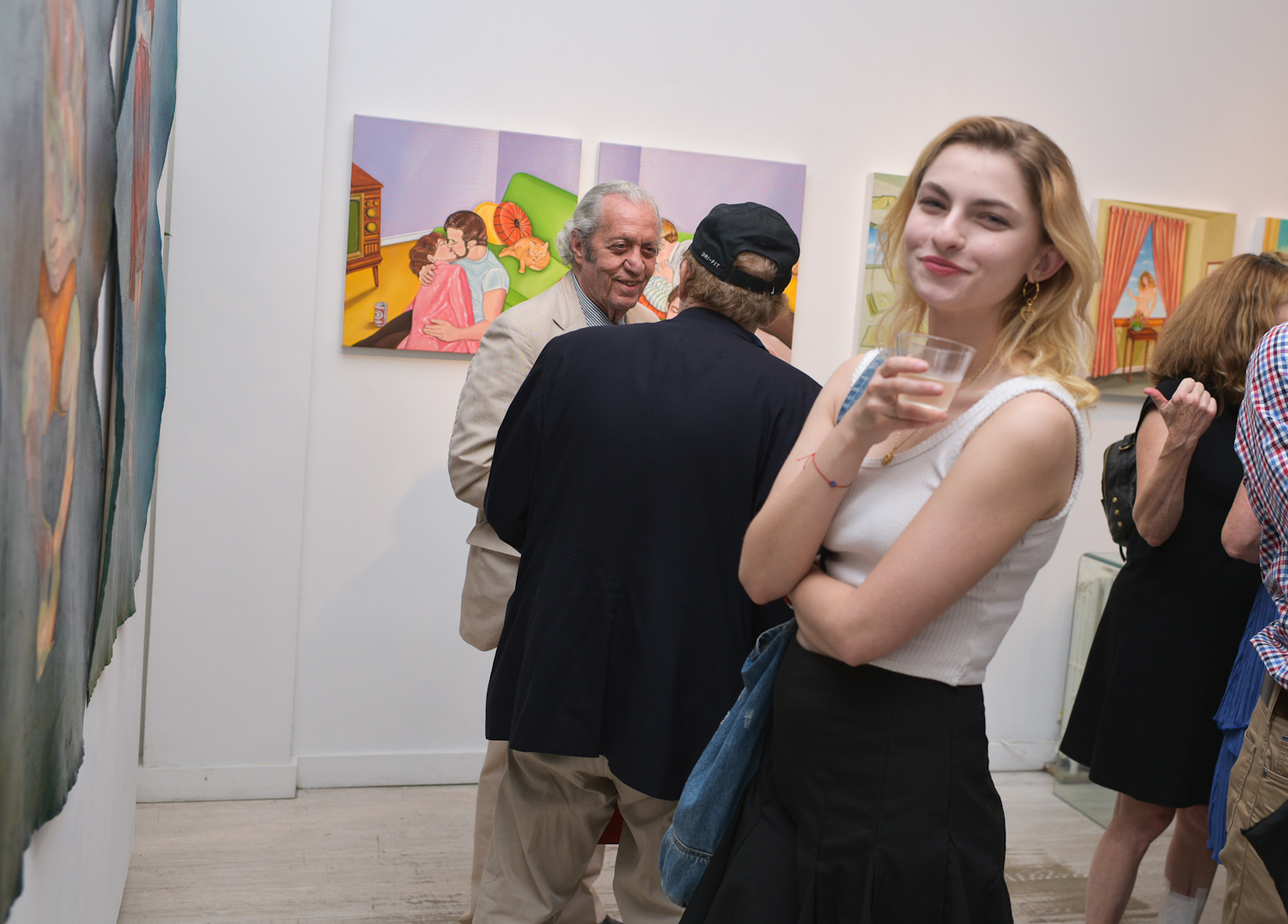 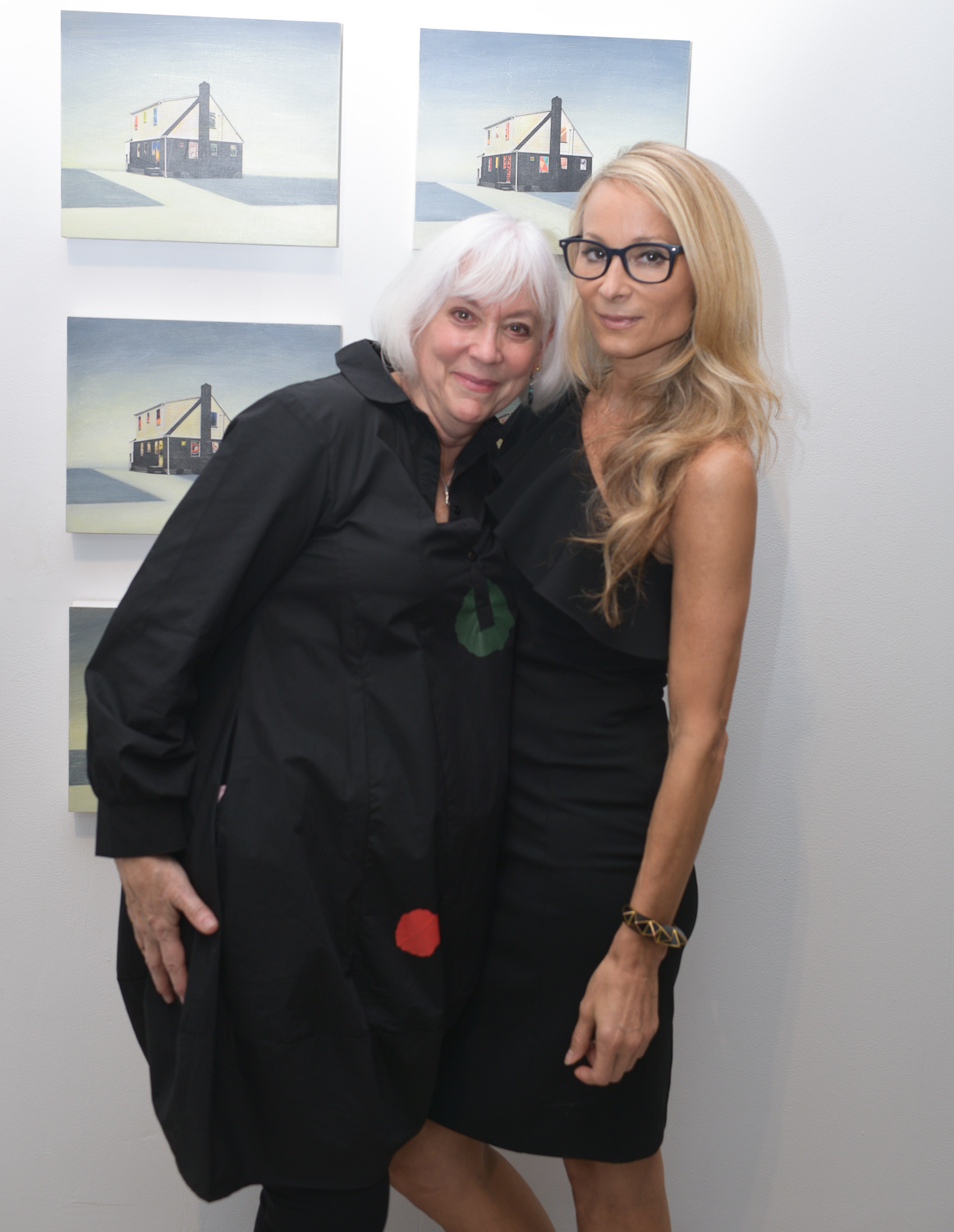 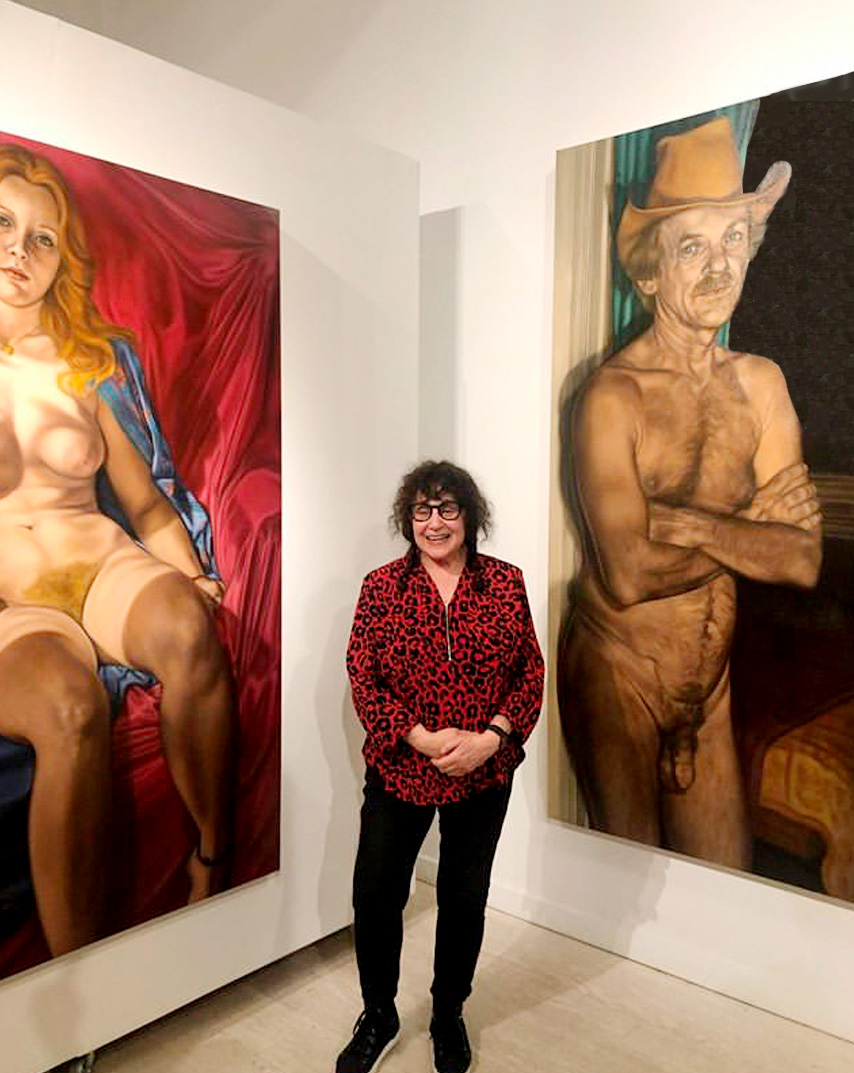 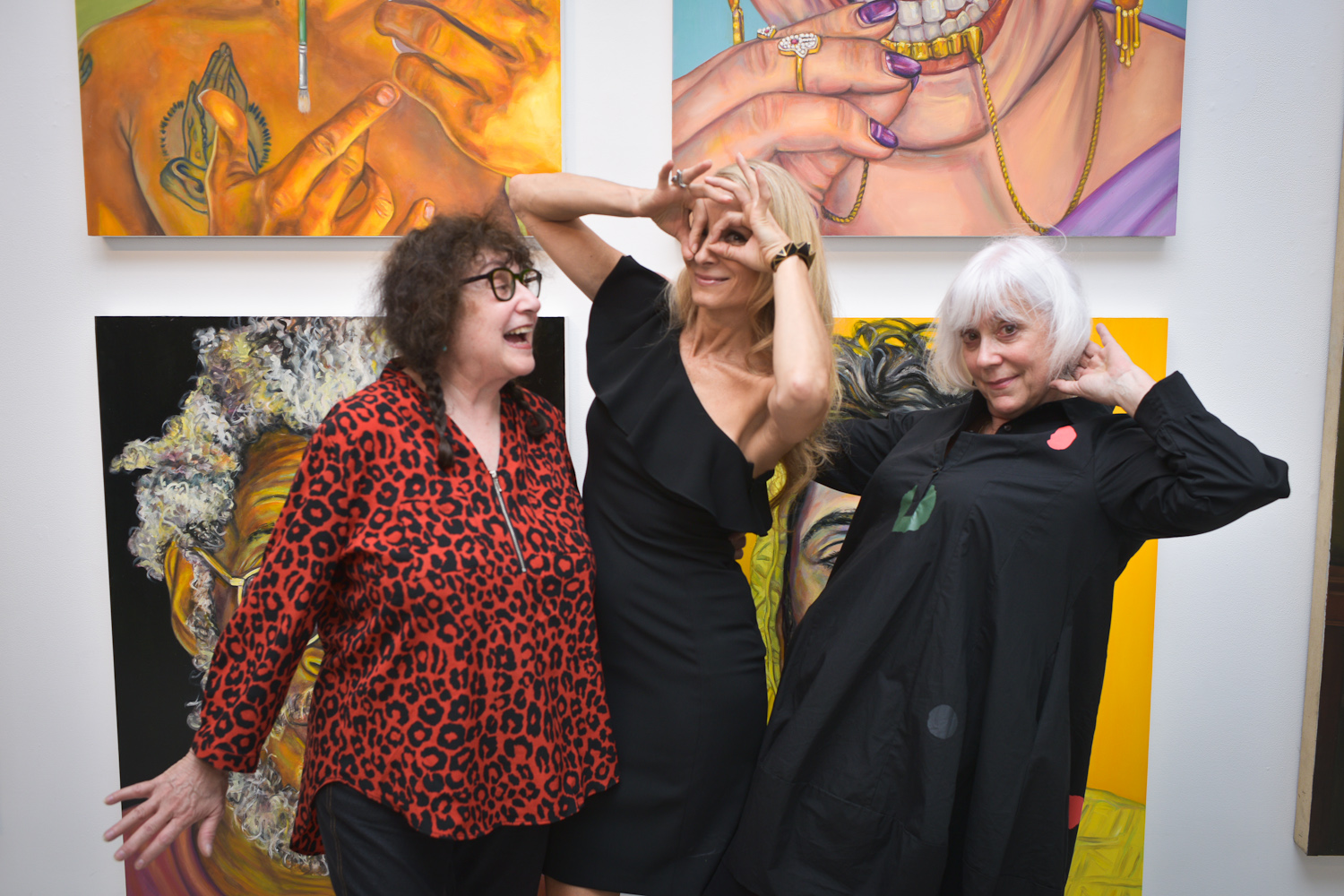 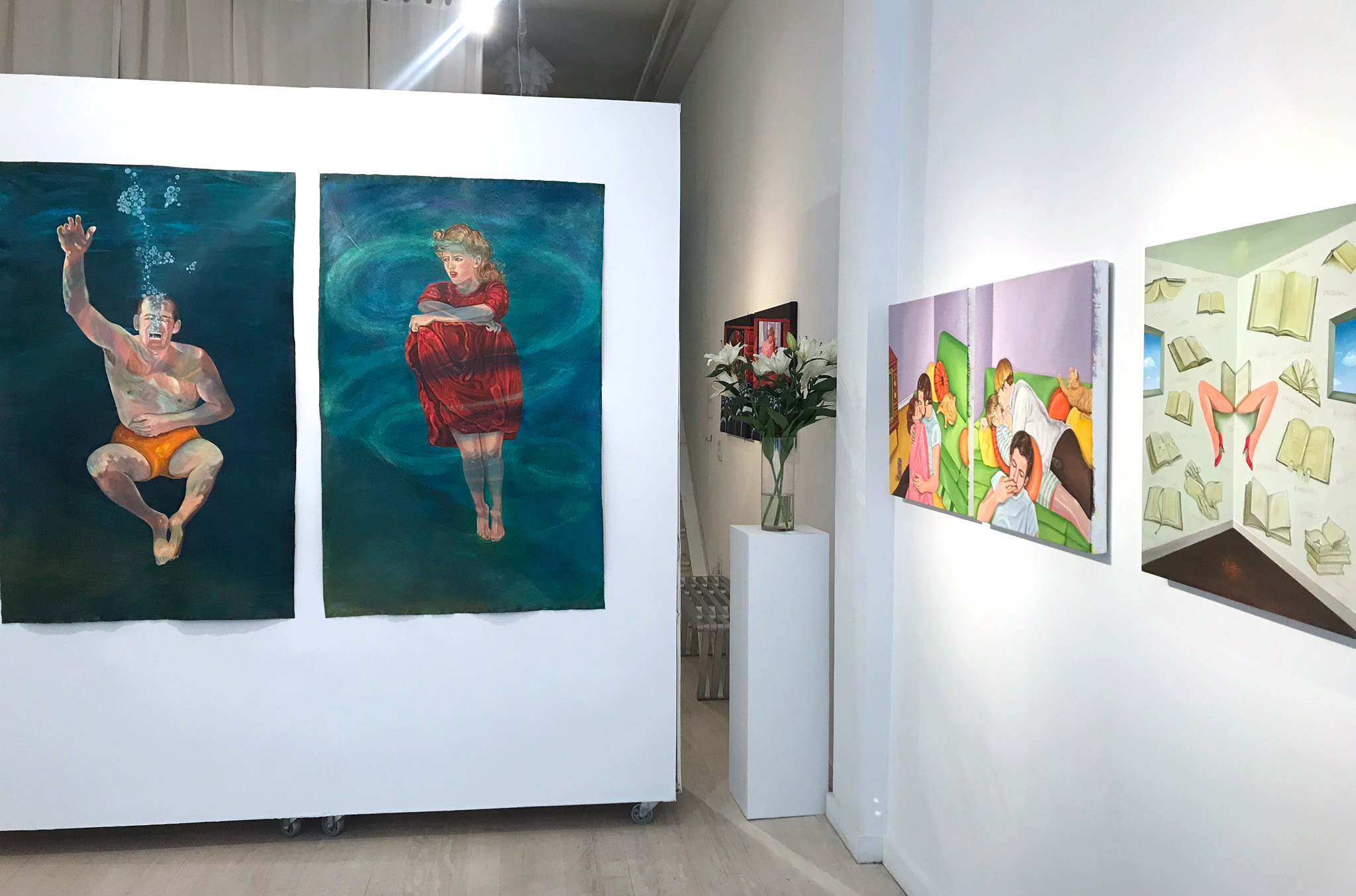 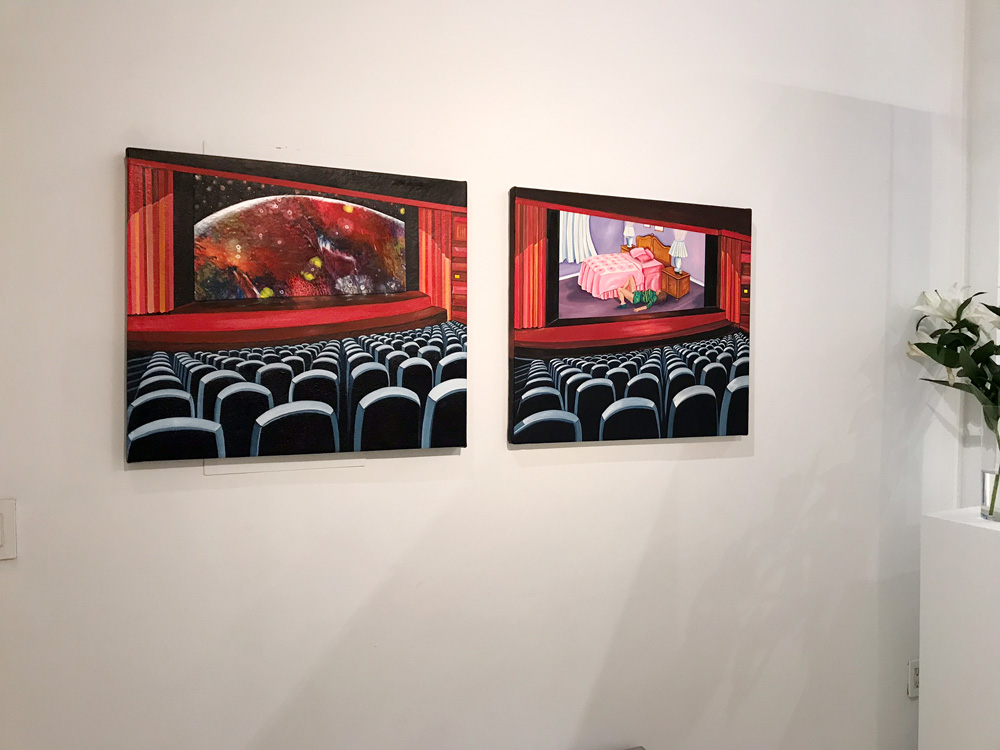 The Untitled Space gallery opened duo exhibition “EXPOSED”, featuring works by artists Grace Graupe-Pillard and Robin Tewes, with an opening reception on Thursday, September 26th, 2019. Curated by gallery director Indira Cesarine, “EXPOSED” will be on view through October 26th, 2019, with a champagne closing party on Friday, October 25th from 6-9 pm.

Practicing since the 1970’s and 80s, pioneering feminist artists Grace Graupe-Pillard and Robin Tewes have both explored through their works over the last several decades portraits of contemporary America, depicting individuals and environments that resonate with our collective conscious as familiar, recognizable and yet unconventional. Duo exhibition, “EXPOSED” presents their unique female perspective on this universe with works that inspire an ongoing dialogue and challenge the outdated notions of men and women’s conventional roles. Their signature styles reveal portraits that address a shift in consciousness by examining the way we perceive one another. Voyeuristic themes have consistently inspired both artists, yet their individual styles approach it conceptually from unique angles.

Exhibition “EXPOSED,” through a selection of recent as well as historical works by both artists, reflects on the fragility of being human, and reveals a vision of our culture that is at once subtle yet a remarkable reminder of the struggles faced in these challenging and changing times. Their works communicate past and present narratives, chronicling moments in time as if from their own private journals, unfolding complex identities through their confidential lens.

In Graupe-Pillard’s realist portraits and paintings of nudes, the backgrounds are stripped bare as are the subjects. The naked and larger-than-life portraits give her an opportunity to emphasize the subject’s individualism, as well as address the human condition and aging process. States the artist, “I metaphorically dissolve into my subjects. I am admittedly a “voyeur” in the sense that I like observing something that is considered to be private. I feel that voyeurism in the context of art requires a penetrating look at the human physiognomy – be it the face or the naked body fully exposed – conjoined through the medium of paint, a sensual phenomenon that occurs when I work without restraint, without self-consciousness, taking poignant risks that reveal a shared humanity.”

Graupe-Pillard has concentrated on portraiture since her early charcoal drawings which she exhibited at The Drawing Center, NYC in 1981. Her work, which has been exhibited at notable institutions such as MOMA PS1 and galleries including Cheim & Read Gallery (NY) and Carl Hammer Gallery (Chicago), has evolved from over the years from pastels to large-scale oil paintings and installations of people who she describes as “having not been integrated into mainstream society.” Her more recent paintings, inspired by selfies and iPhone photographs, attempt to convey the vitality and diversity of 21st century contemporary culture while capturing the ineffable moments in our lives. “The sensuality and radiant beauty of youth and ethnic diversity are depicted in my choice of subjects, as well as the ravages of time which are imprinted on our being. All stages of life are filled with humanity that both elevates and dissipates the spirit.”

Robin Tewes’s work reflects not only the artist’s expression of her inner thoughts and feelings but also her fascination with the interconnection of interior and exterior spaces. Her paintings invoke a complex and often surreal narrative of voyeurism that draws the viewer into an intimate dialogue. “I’m interested in how much a single narrative moment can tell us about our selves and the culture we live in. My work is involved with expressing paradoxical truths and the short stories have psychological theory. I think of the world as a stage, loaded with images that I’m interested in redefining or evaluating, so that I become the voyeur along with the viewer. Repeated images such as brick, plants, crumpled paper, windows and sky, reflect the surreal subtleties that lurk in the mundane and peripheral experience of contemporary life,” states Tewes. The walls or backgrounds
of her paintings are minimal, but at a closer glance are covered with words and images scratched or painted on the surface. Her intention is that nothing is what it seems, especially at first glance.

The Queens-born, New York City-based artist Robin Tewes, known since the early 1980s for her representational paintings of frozen and narrative-like moments, has shown her work in numerous solo exhibitions as well as museums including P.S. 1, the Museum of Modern Art, the Whitney Museum, and The Drawing Center. Tewes paints everyday people and domestic interiors in a precise, almost deadpan style that Artforum critic Ronny Cohen called “searingly direct” in its presentation of information and emotional impact. She often incorporates subtle, graffiti-like text into her paintings, suggesting pointed or disquieting thoughts, conversations or social commentary on the scene being portrayed. ARTnews’ Barbara Pollack described Tewes’s work as maintaining “an edgy balance between surrealism and soap opera.” In addition to her art practice, Tewes has worked as an educator, lecturer, curator and activist. She has contributed socially-minded works to numerous exhibitions and benefits focusing on issues including women’s reproductive rights, human trafficking, aggression, environmentalism, and the Iraq War. Tewes has long been rumored to be one of the original members of the controversial, anonymous feminist collective the Guerrilla Girls, known as member “Alice Neel.”

Grace Graupe Pillard
Grace Graupe Pillard has exhibited her artwork throughout the USA with one-person exhibitions in Hartford, CT., Jackson MS., Chicago Ill., Newark, NJ, in addition in NYC at The Proposition, Bernice Steinbaum, Donahue/Sosinski and Hal Bromm as well as The Frist Center in Nashville, TN, The NJ State Museum and the NJ Center for Visual Arts. In 2015 and 2006, she had solo exhibits at Carl Hammer Gallery in Chicago; other solo
exhibitions were at Payne Gallery at Moravian College, PA., Aljira Gallery, Newark, NJ., and Rider University, NJ. Graupe Pillard has exhibited her work in group exhibitions at P.S.1,  P.S. 122, The Drawing Center, and Cheim/Read Gallery among others and as has been the recipient of many grants including four from The NJ State Council on the Arts, as well as from The National Endowment for the Arts. She has received Public Art commissions from Shearson Lehman /American Express, AT&T, KPMG, Wonder Woman Wall at The Port Authority Bus Terminal, Robert Wood Johnson Hospital, New Brunswick, NJ. Commissions from NJ Transit for the Hudson-Bergen Light Rail Transit System at Garfield Station in Jersey City, and 2nd Street Station in Hoboken, and Aberdeen-Matawan Station in Aberdeen, NJ. Her work has been written about in The Village Voice, The NY Times, Art News, The Star-Ledger, Newsday, Flash Art, Artforum, Art in America, Arts, and Tema Celeste.

Robin Tewes
Celebrated artist Robin Tewes was born in Queens New York in 1950. She received her BFA from Hunter College in 1978 and her MST from Pace University in 2012. She is the Recipient of many notable and prestigious awards, including the 2008 Pollock-Krasner Foundation Painting Award, the 2007 Adolph and Esther Gottlieb Award, and the 2004 and 1989 New York Foundation for the Arts-Painting. Selected solo exhibitions include Wright Gallery, Adam Baumgold Gallery, Headbones Gallery, Klapper Hall Gallery, Bill Maynes Gallery, John Weber Gallery. Some group exhibitions include: at P.S. 1, P.S. 122 Painting Association, The Drawing Center, Aldridge Museum, Whitney Museum, Museum of Modern Art, Hunterdon Museum. Tewes is interested in how much a single
narrative moment can tell us about ourselves. Became a founding member of P.S122 Painting Association and now on the Board of Directors. She has been included recently in the Smithsonian Archives of American Art. Her work has been recognized and written about in NY Times, Village Voice, The Drawing Society, Soho News, Artforum, Artiness, Art in America, Tema Celeste, and Arts to name a few.

NYFW SPRING/SUMMER 2020: COLLECTIONS ON OUR RADAR