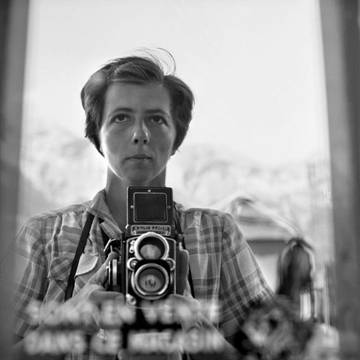 An exhibition of self-portraits by recently discovered street photographer Vivian Maier made from 1950 – 1976 will be on view at Howard Greenberg Gallery from November 8 – December 14, 2013. The exhibition coincides with the publication of the book Vivian Maier: Self-Portraits (powerHouse Books, November 2013) that surveys Maier’s self-portraits, many of which are being shown and published for the first time. An opening reception will be held onThursday, November 7, from 6-8 p.m.

The story of Vivian Maier has practically become a photography legend:  Born in New York City in 1926, she spent much of her youth in France. Returning to the U.S. in 1951, she worked as a nanny in Chicago and New York for 40 years. Reclusive and eccentric, she took pictures all the time, yet never showed them to anyone. From the 1950s to the 1990s, with a Rolleiflex dangling from her neck, she made over 100,000 images, primarily of people and cityscapes.

A book signing for Vivian Maier: Self-Portraits will be held on Thursday, November 7, from 5-6 p.m. with John Maloof and Elizabeth Avedon at Howard Greenberg Gallery.