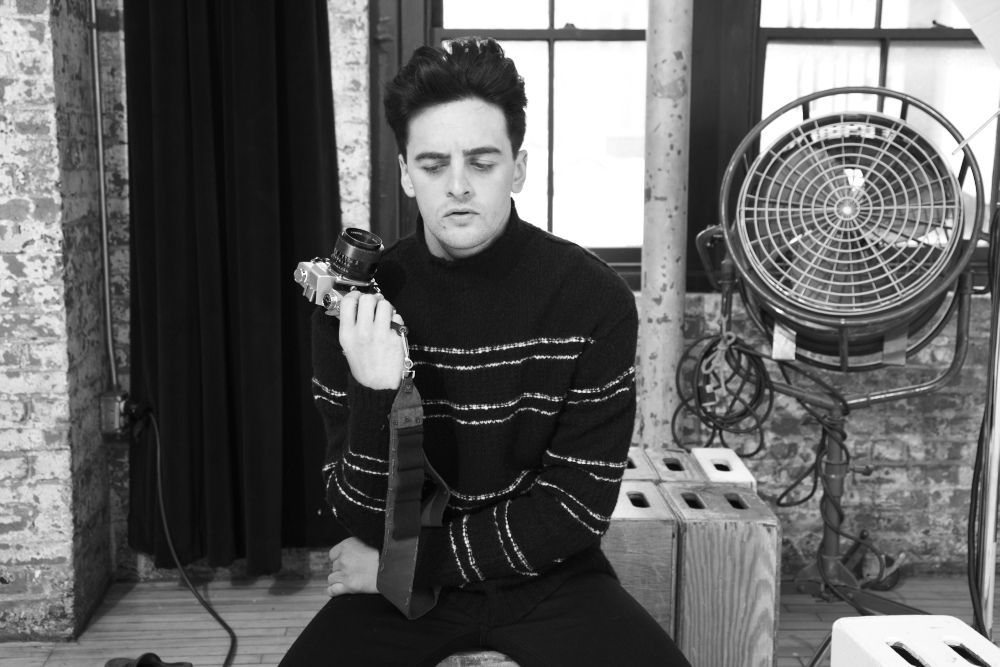 Vincent Piazza went from hockey player to financier to theatre actor before he landed the role that would garner most of his current notoriety, as real-life prohibition-era New York City gangster Charles “Lucky” Luciano in HBO’s Boardwalk Empire. The notoriously violent Luciano went down in history as “the father of organized crime,” but in Boardwalk the viewer gets to see him as portrayed by Piazza; a hot-headed 22-year-old gangster just starting out and making plenty of mistakes. One of which, would be mistaking his nemesis’s mother (Gretchen Moll’s excellent Gillian Darmody) for his wife, and gleefully shagging the daylights out of her. Season 4 of Boardwalk is currently in production and will premiere this fall.

Also look out for Vincent Piazza in the upcoming summer indie film 3 Nights in the Desert, in which he plays a member of an old rock band disbanded years ago. The film follows three former bandmates getting together for one anxious weekend in the desert for their 30th birthdays.

The Untitled Magazine’s editor, Indira Cesarine, chatted with the Queens-born German-Italian actor about his poignant initial foray into acting, finally getting his teeth fixed, and the toughest type of scene to film.

Indira Cesarine: How did you first get into acting, as a career?

I started acting playing hockey in college, wanted to be pro, got injured, worked in finance, tried a few things, everything was pushing me into the direction of acting; I felt at home, I loved it.  I was working in finance and my business partner – I had a knack for impersonations, and was a joker in the office, and he said ‘you are wasting your time, you should be an actor.’ We closed a big deal and he fell asleep driving home one night on the bridge, and passed away – he hit a divider – it forced me to re-think things, and I wanted to find meaning in the loss, and legacy – and I decided to make good in what he was always telling me to do, and I have never looked back.

He was a great guy. He was a bit of a mentor; he was older than me, and we joked around a lot. He was a life mentor. He didn’t know anything about acting, but he knew I should be acting.

How long do you consider yourself to be part of the industry?

Since 2006, prior to that I was training and doing plays, some 30-odd plays, anything I could get my hands on. I started onstage – I’ve done some indies, I’ve been doing Boardwalk, and I love that, and I would love to do more theatre and film, if the right project came along.

Is there one moment you can describe, definitively, as your “breakthrough moment” in your career thus far?

It’s actually a funny story – I was running out of money; I had paid $30 dollars to audition for a casting director and I was thinking I need another job soon, I was running so long.  The director, Nadia Lubbe, I did a monologue for her, and she ended up sending me on an audition for a movie called Rocket Science and I ended up getting the job. It was a professional job. I was finally paid enough to get my teeth fixed! The first paycheck went to get my teeth fixed. It was from playing hockey – my teeth looked like someone rolled them like dice and put them in my mouth.

Do you have anyone you consider to be a mentor?

Alice – as in ‘Wonderland’ – Spivak. I met her when I first started, and I have been working with her ever since. She has taught me everything I know. I knew that there was a craft involved and that there is much more than it meets the eye in the business. [She taught me about] playwrights like Shakespeare, Chekhov, and classic American playwrights like Arthur miller and Tennessee Williams. She got me into the roots of what we do. I think it’s important to know where we are coming from.

If you weren’t acting, what do you think you might be doing?

I hate being in one place too long, so something outdoors. I would want to move around a lot … maybe an architect or engineer.

Have you had any difficult scenes you’ve had to film during your career?

A few times. It’s usually when you are on the receiving end and emotionally challenged. There is something to be said – whether you are the victim or the predator – those are always touchy scenes, like forcing yourself on a woman – which was very challenging. There was one scene, when I got drunk and had to force myself on a friend, and it was very challenging.  The character couldn’t understand why his love was unrequited. This is from a movie called 3 Nights in the Desert – it’s coming out this summer.  Violating someone’s trust, that can be hard, and to be violated. That is the occupational hazard thing that is a love-hate relationship; as it’s great when you get the hard scenes, but hard on set.

Do you have a favorite designer?

Varvatos. And the late Alexander McQueen. I loved McQueen! I took my brother’s shirt…and I never gave it back

Can you name a motto or a few words of wisdom you live your life by?

“Day by day, every day is a new opportunity to make something great happen, so don’t waste time.“   And, “happiness is a choice.”

What is your favorite type of cinema?

I’m hooked on classic Italian cinema. The character I play [on Boardwalk Empire] is an Italian immigrant, and I love all old Italian films; they’re so visually stunning.

Can you tell us a little bit about your current projects?

Boardwalk Empire, 3 Nights in the Desert and I’m developing a screen play, writing a pilot and we are getting close to a final draft.

What are your most notable film/tv/theatre credits, in your opinion?

Something that hasn’t been seen by anyone probably, my first film Rocket Science. And Boardwalk Empire, I’m proud of the endurance that I am learning. I’m learning more about the business – I’ve been working on Boardwalk since June 2009, and it’s been an amazing experience.  The last commitment I had that long was high school!

– Coverage by Erika Broad for The Untitled Magazine

– Photograph by Michael Williams for The Untitled Magazine

0
The Untitled Magazine December 4, 2012
No Comments Yet