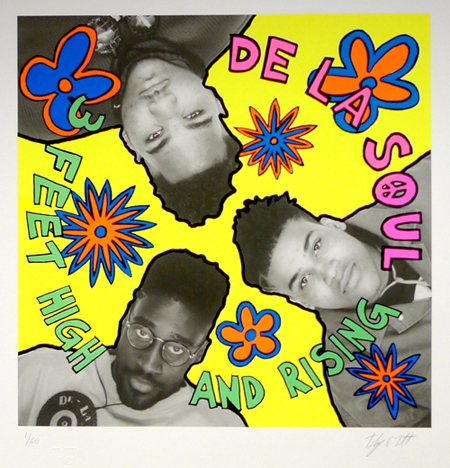 Over 20 years after its release, 3 Feet High and Rising remains one of the most feted albums in the hip hop canon. This unique LP emerged in 1989 amidst the burgeoning US hip-hop scene. While most now-forgotten groups took the cookie-cutter approach to hip-hop, replicating the style, lyrics and golden chained aesthetics of the era, De La Soul’s daisy age record broke the mould. 3 Feet High and Rising became New York’s unofficial soundtrack, it’s bouncing beats and positive vibes match the city’s late 80’s early 90’s vibrancy. Today the record is still spinning, having stood the test of time. Its unique aesthetic approach to the formation of hip hop is represented both in its sounds and its unforgettable album artwork.

The gallery will be displaying the new print, alongside the original sketch, gold disc, and other material from The Mott Collection archive.