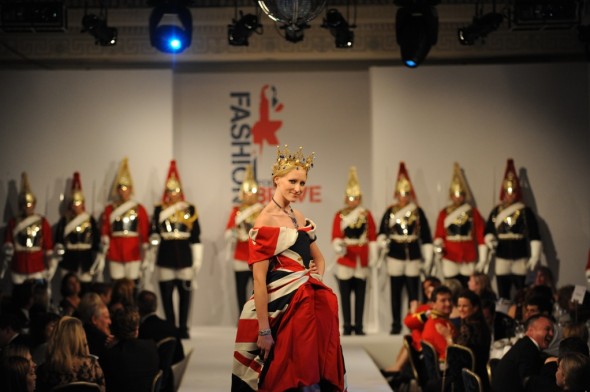 The 2012 Fashion for the Brave took place at the legendary The Dorchester on Thursday, September 20th. The event has raised over an astonishing £250,000 funds for injured Household Cavalry men and their families and the British Forces Foundation.

The event hosted a wealth of soldiers, celebrities and VIPs all of whom proudly supported the charities, gave generously, applauded the soldiers of the Household Cavalry loudy and had an amazing night over all.

Aston Martin donated a Special Edition Aston Martin Cygnet, auctioned by Jeffrey Archer, and which heralded a very exciting competitive auction between Sir Phillip Green (via phone with Harold Tillman) and another guest.

Guest enjoyed a meal of delicious Beef Wellington and sipped on coffee with Baileys to end the evening in style.

After dinner and the auction – the main event. A spectacular catwalk show created by fashion legend Hilary Alexander with the Best of British fashion which rounded off with a glorious finale featuring supermodel Jade Parfitt in a bespoke Corrie Nielsen dress. All the models were made up by Laura Mercier, wore Boodles diamonds and sported Brave – a exact match to the red of the Guards uniform by Maison Danu, who give 50% of their profits from its sale to the charity. 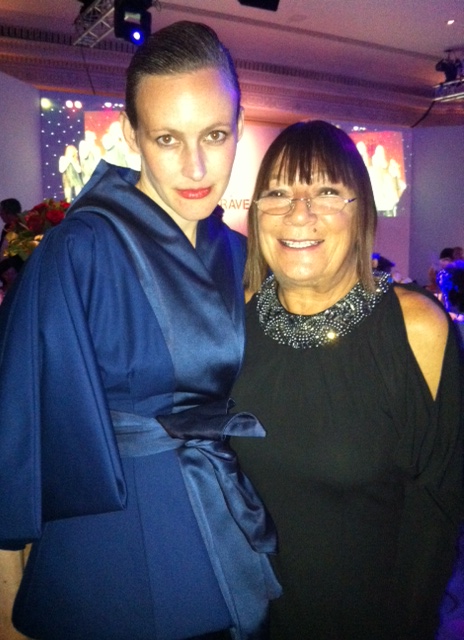 Designer Corrie Neilsen with Hillary Alexander at the event

The Grand Auction prizes were:

There was also a silent auction of equally wonderful experiences and gifts featuring prizes from Anjli and Cocorose London.

Patron Sheeva Moshiri said “It’s been such an incredible night, the support from the fashion community has been incredible and we are delighted to have raised such a terrific amount for the HCOCF and BFF to further their good works.”

Fashion legend Hilary Alexander organised the catwalk show with Lesley Goring – with the Best of British brands including Hackett, who sponsored the male models, Stella McCartney, Gieves and Hawkes, Johnstons of Elgin, Mulberry, Beulah and Burberry.

Sponsored by Aston Martin, Boodles, The Dorchester, Vestra Wealth and The Wren Press, Fashion for the Brave has been supported by the British Fashion Council. Media partners are the Evening Standard, Runwild, Hello and The Spectator.