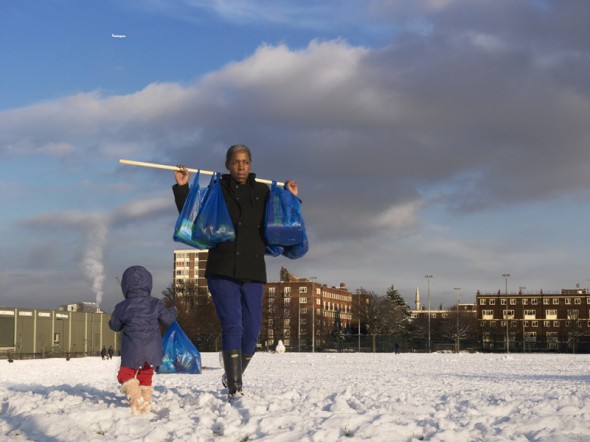 Hannah Starkey: In the company of Mothers

Tanya Bonakdar Gallery is very pleased to present exceptional new photography by Hannah Starkey. Entitled In the company of Mothers, this is the artist’s third solo exhibition with the gallery.

Quietly contemplative yet intensely evocative, this new series of photographs builds on Starkey’s exploration of the physical and psychological connections between the individual and her everyday urban surroundings. Since the beginning of her career, the artist has worked predominantly with women as her subjects, collaborating closely with actresses as well as anonymous acquaintances she meets on-site to develop intricately textured scenes that filter modern life through the female perspective. Together with these models, Starkey reconstructs glimpses of interior lives by capturing her subjects in poignant moments of introspection amid ordinary public spaces. Lost deeply in their own thoughts with eyes diverted or shielded from the camera’s gaze, Starkey’s quiet protagonists tap powerfully into the minds of her viewers as they work to construct their own interpretations of these elusive narratives.

Within the second floor gallery space, Starkey presents nine densely colored and layered compositions that focus specifically on the mother figure. Staged throughout different areas of London, these scenes frame a series of women and children against stark urban backdrops – walls of graffiti and street murals, inner city parks, storefront windows, a construction site – that heighten the sensation of the images on both a formal and associative level. While the sleek and often severe aesthetic of modernist architecture has always played an important role in her compositions, here the artist juxtaposes elements of this constructed environment with occasional glimpses of blue skies, natural light and environments. Strong associations between colors, shapes and patterns work to visually conflate these real and represented spaces, while recurring symbols like windows, sunglasses and other reflective surfaces trigger deeper psychological connections between the personal and social, internal and external worlds that we all inhabit. Like these symbols, Starkey’s photographs function as images of reverie that allow viewers to explore not just what they see, but how they experience the visual world at large.