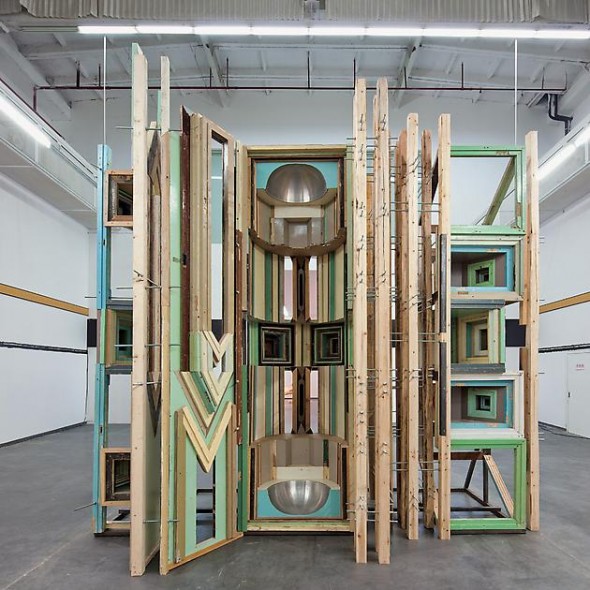 Lehmann Maupin is honored to present the first solo exhibition of Chinese artist Liu Wei’s work in the United States, on view at 540 West 26th Street from 28 February through 23 March 2013. The exhibition will feature an amalgamation of multi-media works created over the past year in the artist’s studio in Beijing. Three large-scale assemblages constructed from salvaged demolition debris, a continuation of the artist’s Merely a Mistake series begun in 2009, will be the centerpieces of the installation in the main gallery space.

Considered to be one of the most progressive and original Chinese artists to have emerged on the international art scene, Liu’s work has evolved over the past 15 years into a layered conceptual approach that transcends medium and material. Working across painting, sculpture, photography, installation and video, Liu is relentless in his pursuit of truth and engagement with reality. His exploration of urban life stems from the accelerated urbanization afflicting his immediate cityscapes and the instability of a rapidly changing society. Of the times, Liu has said, “We grew up when things were constantly changing and nothing seemed stabile. There was a turnaround in values every couple of years…. Today you’d believe in one thing and tomorrow you’d believe in something completely different.”

Critical of the systems on which contemporary society is structured, Liu employs whatever medium or technique is best suitable to call into question the fixed notion that there is one way to understand the world and one way to act. In his catalogue essay for Liu Wei: Trilogy presented in 2011 by Shanghai’s Minsheng Art Museum, Gunnar B. Kvaran writes:

Acutely aware of his place in history, but also concerned with breaking tradition, Liu intermingles artistic inventiveness and an engagement with serious social and political questions, inviting the public to take part in intersubjective relationships. He does so through a symbolic constellation of objects, created out of unexpected materials and placed in surprising configurations, that deal with universal topics such as power and politics, society and identity, history and memory, art and philosophy, or with more abstract notions like time, unpredictability, change and illusion.

Kvaran goes on to say that “each of his works is like a vessel loaded with intelligent and meaningful reflections on the human condition, and the power of his art lies in the originality of the forms, objects, materials, and narrative structures that he brings together.”

Lehmann Maupin’s exhibition highlights new work from the various series for which Liu has gained notoriety, includingExotic Lands, Jungle, China, Merely a Mistake, Beyond the Sky Limits, Truth Dimension, and Colors. The abstract imagery of his Truth Dimension and Colors paintings recall the vast skylines of the world’s metropolises, their vertical urban sprawl unfolding frenetically across horizontal panoramas; in sharp contrast, the muted bands of color in Beyond the Sky Limits appear as quiet ruminations on the natural landscape. For Liu, an engagement with architecture is a reoccurring thread, and the reclaimed doorframes, wooden beams and metal bolts that constitute Merely a Mistake take the form of pointed arches and flying buttresses, reminiscent of Baroque and Gothic architecture. Installed side-by-side, as opposed to grouped by series, the nearly two-dozen works on view form a collective reading of a profoundly complex artistic practice.