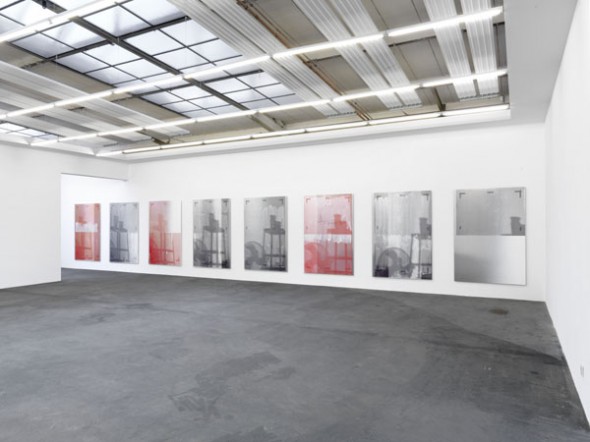 In his first institutional solo exhibition in Germany Nathan Hylden presents, amongst others, his most recent series of paintings on aluminium whose starting point is a photograph of his studio.

The primacy of uniqueness, which is one of the main criteria used to assess art, is highlighted here using strategies of repetition and imitation. One example in which this is particularly clear is in the paintings of Nathan Hylden (*1978, currently residing in Los Angeles).

The starting point for his most recent series, which is to be exhibited in various locations including Kunstverein Hamburg, is a photograph of his studio. It shows the silhouettes of a number of objects and items of furniture found in the studio, although they are in this instance purposefully arranged and staged in a certain way. By means of silk-screening, he then transfers the photograph on to 10 equally large, thin aluminium plates, whereby the motif is shifted very slightly for each successive copy. In no particular order, large sections of the plates have then been painted with colour before being piled atop one another and treated with acrylic paint. The stacking leads to visible traces of the other plates being left: like an index, they all reference one another whilst also indicating the existence of further images. In the end, Hylden positioned the silvery grey and red aluminium plates in the exhibition space in such a way that the play of light and shadow in his studio is reproduced on the walls: the walls of the exhibition space become the walls of the studio. Through painting, the work setting in his studio become part of the exhibition: the place of production becomes the place of presentation. For visitors, the sequencing of the aluminium works functions as a filmic sequence, the wandering silhouettes depicting the passage of time.

Through these works, Hylden addresses both the conditions and the potential of painting. He tests various backing materials and looks at how these interact with different layers of colour. Technical processes have standardized the production of images, reducing the artist’s gesture to a minimum and otherwise transposing it onto the concept of repetition. A cosmos of images arises, made up of numerous interconnected and inter-referential works, whose beauty evolves by dint of their serial qualities and iteration.