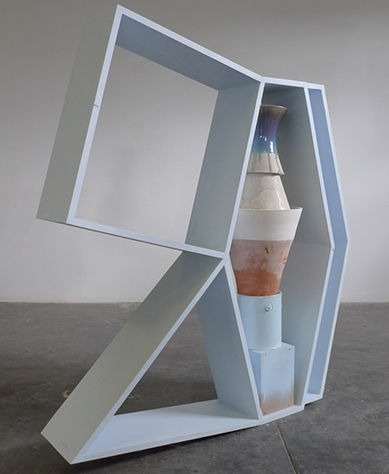 Tracy Williams, Ltd. is presenting new works by Nicole Cherubini, in her first solo exhibition with the gallery, in and out of weeks. This exhibition attempts to collapse the boundaries between movement, space, process and time. By juxtaposing rigid, geometric forms with texturally voluptuous shapes, Cherubini explores the balance and dissonance between surface and ornament, object and support, depth and plane. As we move in and around the works, our notions of time and place become altered, perhaps leaving us in an unfamiliar state.

These floor-based and wall-mounted sculptures deftly interweave clay (terracotta, porcelain, and earthenware), glaze, paint, and wood. Additionally, the gallery will be exhibiting works incorporating pine and MDF, which have transitioned from serving as a structural support to an integral component of the aesthetic and theoretical discourse surrounding her work.

The concept of a non-hierarchical space, delineated by an egalitarian use of elements, whether a physical act or object, is deeply embedded in Cherubini’s practice. She began investigating communes and collectives from the twentieth-century, where community members strove to maintain equality amongst each other and throughout their daily labor.  Cherubini later gravitated towards the ideologies of the Greek philosopher, Empedocles, who designated earth, water, air, and fire as the four Classical elements. On a metaphysical level, these elements embody the four fundamentals of a human being: the physical, etheric, astral, and ego body. Cherubini is continuously enamored with the conglomeration of and impartiality among these essentials.

Minimalism’s affinity towards physical space and repetition is yet another influential marker. Her process is dedicated to form, material and surface as a potent means of manifestation, and moreover, inquiry. Conversely, Cherubini constructs an unrestricted ‘community’ of her own, which assimilates a variety of materials and techniques.

Through a symbiotic approach- whether molding, tearing or using an extruder to create texture and volume in the clay- Cherubini’s work accentuates and visually records each gesture, or rather, each moment in her process. By doing so, she creates a non-hierarchical space for sculpture, an environment where everything is needed and valued. The crystal-like residue produced by the glaze during the firing process, along with the dripping of matte and high gloss paint on the materials, simultaneously highlights her commitment to the idea of a ‘Gesamtkunstwerk’, a synthesis or totality of elements.