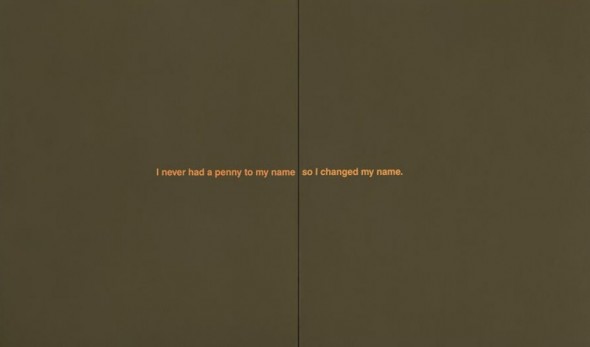 The exhibition features a selection of paintings from the artist’s iconic series, spanning a period of 1987 to 1993. Incorporating jokes reflective of the “borscht belt” humor prevalent in the 1950s, Prince’s paintings tap into social preoccupations of the national subconscious. Prior to Prince’s use of the jokes, many had infiltrated popular culture, gradually losing their original authors to become adopted by a largely oral tradition.

In his canonical text, The Death of the Author, Roland Barthes states: “The text is a tissue of citations, resulting from the thousand sources of culture […] The writer can only imitate a gesture forever anterior, never original […] If he wants to express himself, at least he should know that the internal ‘thing’ he claims to ‘translate’ is itself only a readymade dictionary.” Understood in this context, by transcribing jokes onto canvases Prince sheds light on the dynamics of language, appropriation, authorship and the enigmatic presence of a distinctive voice.

Prince’s work of the late 1980s-early 1990s shifted the pop art paradigm of the baby boom era, to alternate subcultures and a new American dream. These themes can now be seen as poignant examples of the central preoccupations of Prince’s artistic output.

For the first time in over fifteen years, the most outstanding examples from Prince’s Jokes series will be put on display – many of which will not have been previously shown in the United States.

SHOP ALEXANDER WANG, MARNI, VALENTINO + MORE UP TO 70% OFF