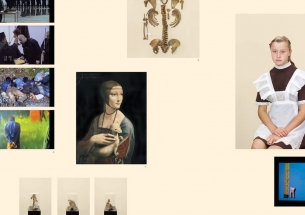 The George Economou Collection present an exhibition of works by Taryn Simon. With contributing text by Nicholas Cullinan, curator in the department of Modern and Contemporary art at the Metropolitan Museum of Art, New York, and in collaboration with Skarlet Smatana, director of the George Economou Collection, the exhibition features a selection of works from Taryn Simon’s major projects such as The Picture Collection, A Living Man Declared Dead and Other Chapters I-XVIII, Contraband, and An American Index of the Hidden and Unfamiliar.

Taryn Simon has quickly established herself as one of the foremost photographers of our era. Her arrestingly beautiful images, incisive eye and rigorously intelligent projects continue the work of great American photographers ranging from the objective, documentary style of Walker Evans to the appetite for the strange and uncanny displayed by Diane Arbus.

The works on view at the George Economou Collection span the last six years of Simon’s career. These range from earlier projects such as An American Index of the Hidden and Unfamiliar of 2007, where Simon documented, in dispassionate style, an array of sites and cultural artifacts, such as the foundry of Smith & Wesson in Massachusetts (still the leading manufacturer of handguns in the U.S.), or the Alhurra TV Broadcast Studio in Virginia – a U.S. Government sponsored, Arabic language television network dedicated to disseminating news and information from America to the Arab-speaking world. Simon’s deepening interest and engagement with differing modes of taxonomies manifests itself not just through the array of illicit objects in Contraband of 2010, ranging from cigarettes to counterfeit designer handbags – all of which are photographed in a cool, clinical manner – to the human subjects of A Living Man Declared Dead and Other Chapters I –XVIII, produced over a four-year period (2008-11) and which trace the genealogy of an array of bloodlines scattered around the globe.

MUSIC IN THE DIGITAL ERA