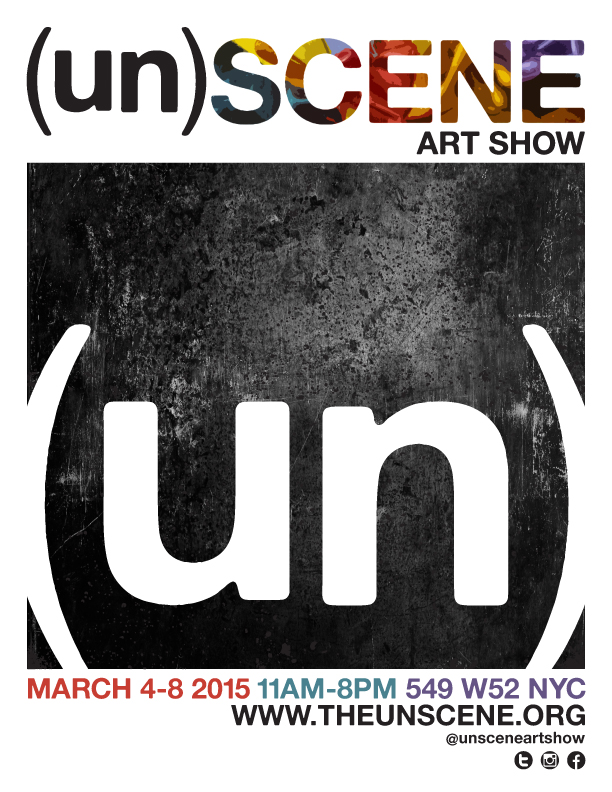 Amidst Armory Arts Week, THE(un)SCENE Art Show will open for the Week of March 4-8 for its third year. (un)SCENE, formerly (un)FAIR, is a space in contrast to “the maze of cookie-cutter, white-walled art fairs.” It wants to bring art back to passion, and away from the commercialized world it now sits, where openings are about cocktails, and price is about name recognition. The schedule of exhibits and events include innovative installations, performance art, painting, sculpture, and participatory pieces “with the goal of celebrating the spirit that underlies the work of the creative process.” Located one block away from the Armory Show, art lovers and collectors can discover what many call, “the best surprise of their Arts Week.”

The curators, art advisors, event planners, designers and artists that make up THE(un)SCENE team are united by a mission to differentiate the show in a crowded market of exhibitions. The artwork – representing all points of the art-universe spectrum — is united by “the unimpeachable passion and impeccable craftsmanship of the artists, and exhibits in an easily navigable space that is itself a work of art. Our goal is to provide an enjoyable, memorable experience for all guests.”

See below for artists included in the fair:

(un)SCENE director and art curator, Mikel Glass, is an internationally respected painter and constructionist, who has worked as an artist in Hell’s Kitchen for twenty five years. He believes that an artist’s responsibility is to document the zeitgeist in which he is steeped. As such, he spent the first several years in his neighborhood documenting the plight of the homeless and addicted, and has always re-purposed found objects from his surroundings to create paintings, kinetic sculptures and installations. These interests culminated in 2009 with a mid-career retrospective entitled The Discarded at the Colorado Springs Fine Art Center. As Hell’s Kitchen gentrifies, Mikel has turned his attention to observing how the art world works. In 2012 he created Fair at (Art) Amalgamated in NYC, which explored the mechanics of the art market, using the art fair paradigm as the vehicle of exploration. THE(un)SCENE epitomizes that scrutiny of the current art world. His conclusion is that the experience of art should be visceral and fun for all involved, but instead has been obfuscated by the forces of the market.

HIGHLIGHTS FROM THE 2015 ACADEMY AWARDS + THE WINNERS