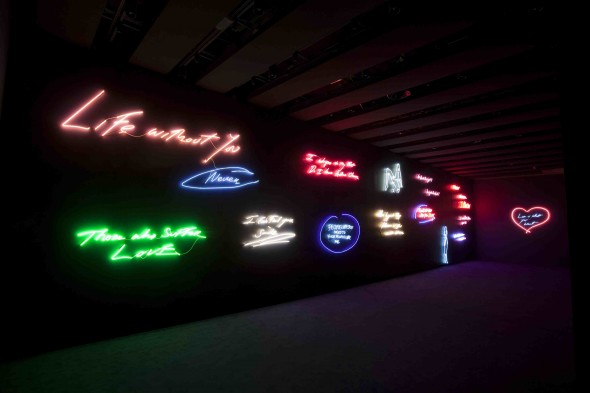 Lehmann Maupin Gallery announced Tracey Emin’s appointment as Commander of the Most Excellent Order of the British Empire (CBE) for her contributions to the visual arts.

Born in 1963 in London, England, Tracey Emin enrolled at the Maidstone College of Art, Kent to study painting. She continued her studies at the prestigious Royal Academy of Arts, London, where she earned a Master’s degree in painting. Today, Emin is regarded as one of Britain’s most significant contemporary artists. She is internationally recognized for her blunt, personal, and revealing style, which elicits a broad spectrum of emotions ranging from shock to empathy to self-reflection. Drawing on personal experiences, Emin often reveals painful situations with brutal honesty and poetic humor in a wide variety of media including painting, drawing, embroidery, neon, installation, sculpture, and film.

In 1999, Lehmann Maupin presented Tracey Emin’s first solo exhibition in the United States, Every Part of Me’s Bleeding. Following this critically acclaimed exhibition, Emin presented her infamous installation “Bed” at the Tate Gallery for which she was shortlisted for the Turner Prize. In 2007, Emin was chosen to represent Britain at the Venice Biennale, becoming the second female artist to ever do so. That same year, Emin was made a Royal Academician and was awarded an Honorary Doctorate from the Royal College of Art, a Doctor of Letters from the University of Kent and a Doctor of Philosophy from London Metropolitan University.

Tracey Emin lives and works in London, England and has been represented by Lehmann Maupin, New York and Hong Kong since 1999.