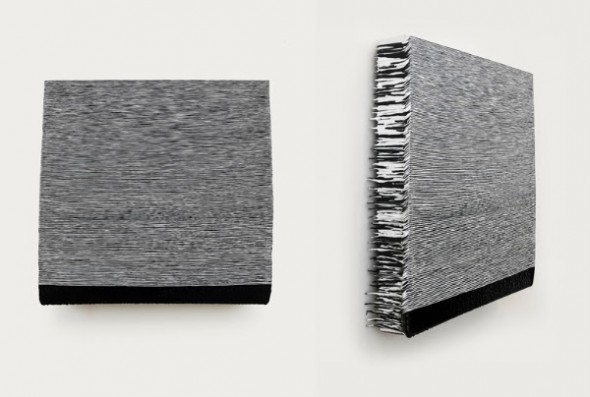 Pace Gallery will be having an exhibition of new work by Chinese artist Wang Guangle, a pioneer of abstract and conceptual art among his generation, from October 10 through November 1. The exhibition will survey his approach to abstraction by featuring nine new works from three series, including four Untitled paintings (begun 2007), four Coffin Paint works (begun in 2004), and one painting extending from his Terrazzo series (begun in 2002). Pace will publish a catalogue to accompany the exhibition, which will include a new essay by Dan Cameron, chief curator at the Orange County Museum of Art, California.

Although each series emerged at different times during the artist’s career, he now often works simultaneously on all three in an organic manner, as he points out: “when I was working on Terrazzo, Coffin Paint, and Untitled, I didn’t distinguish much between them, though they developed a complementary relationship as I worked.” Wang has gained critical praise for his process-based paintings, which simultaneously reference traditional memento mori, temporality, repetition, and abstraction. Deriving from a traditional practice, Wang produces his Coffin paintings by working with his canvas resting flat on the studio floor, systematically applying layers of acrylic paint in alternating colors—at times monochromatic, at times colorful—resulting in a densely stratified surface.

An extension of the Coffin Paint series, his large-scale Untitled works evolve from the same technique. Here, however, each layer of paint is applied from the far edges of the canvas working inward toward the center, thus resulting in an illusionistic depth, the lighter tones of the composition acting as a framing device. As with the Coffin Paint series, each painting is provided with a numeric title indicating the year, month, and day of its completion. Each stroke of paint signifies a moment in time, an amalgamation of gesture, which in completion becomes a meditation on temporality. Wang reveals, “the most important thing is not the ‘what’ of painting, but the ‘how.’”

The Coffin Paint series was inspired by a burial tradition he witnessed while growing up in Fujian province, southern China, where it is customary for the elderly to cope with their impending mortality by acquiring a casket and painting it in red lacquer, adding a coat of paint every year on the same date as a celebration of longevity. A meditative symbol of acceptance and preparation, the coffin can incur several years’ worth of paint layers up until the moment of a person’s passing. In this way, Wang’s method evokes a strong metaphor, relating to Chinese cultural identity as much as it relates to conceptual art practices.   One of his earliest abstract series, Wang’s Terrazzo paintings relate to the personal sphere, specifically the terrazzo tiled floors of his childhood home. The artist states: “My memories of my home are bound up inseparably with this material. When I paint it, I feel freed from specific forms—I can virtually look inward. The Terrazzo paintings are decidedly minimalist in approach, abstractions of time and gesture. The artist applies paint to the canvas surface, millimeter by millimeter, often taking months to meticulously accumulate brushstrokes into large-scale renderings of marble tile. A profound manifestation of his Terrazzo series is evidenced in the nonextant mural, The Wall (2004). With his studio earmarked for demolition, the artist painted an entire wall of the space throughout the course of one month. The building was razed shortly after the mural’s completion, a potent symbol of transience. “In a perfect world, art would disappear,” says Wang, “Or rather, once art had helped the world become perfect, it would then allow itself to disperse.”