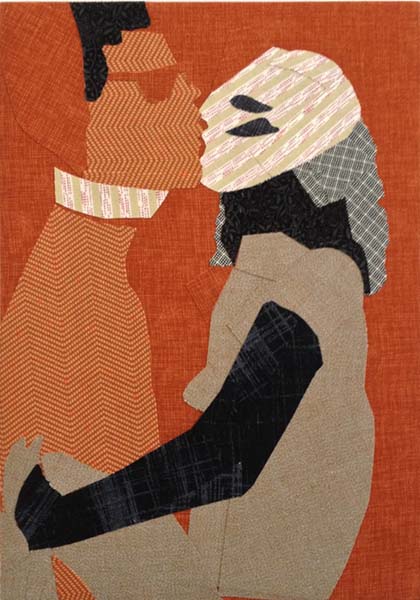 Tracy Williams, Ltd is pleased to announce Twin Lens, an exhibition of recent works by Alika Cooper. The artist’s first solo presentation in New York, the show is comprised of Cooper’s textile-based compositions. Heat-activated adhesive and an iron are used to adhere fabric shapes to the support, slowly building up the composition in a method similar to painting, creating space, shadow and definition. This technique, gleaned from the artist’s mother and aunts, all of whom are avid quilters and crafters, connects Cooper’s work to a long tradition of female handiwork. The variance between the individual patterns of the fabrics push and pull, giving the picture plane a startling depth. This tension is echoed in the contrast between the homey feel of the mass-produced fabrics and the frequently sensual and sexual bodies they form.

The works invoke and transform photographic representations of women, in particular, the work of Helmut Newton, Lisette Model, Umbo (Otto Umbehr) and Man Ray. For example, Stretch (2013) is based upon a 1941 photograph by Model of a reclining woman on the beach. In Cooper’s piece, the image is cropped and flipped horizontal, and this shift in composition gives the figure a more insistent presence. The weft and weave of the fabric creates a paradoxical affect of revealing and concealing, both suggesting the sturdiness of the body it delineates and rendering it opaque. Like the title suggests, the work in Twin Lens seeks to create a doubling and reframing of these iconic images of women to create a space that is more tenable: “Using a set of impossible perspectives, I try to make the perspectives possible again.”

Alika Cooper (b. Guam 1979) received her MFA and BFA from CCA San Francisco in 2006 and 2002 respectively. Cooper has exhibited in the United States and Europe with solo exhibitions at venues such as Night Gallery (LA), Eleanor Harwood Gallery (SF, 2011); Hamish Morrison Galerie in Berlin, (2010); and Galleria Studio Legale in Rome, Italy (2007). Other exhibitions include To Live and Paint in LA at The Torrance Art Museum, Torrance, CA (2012); Holding Onto Something Slippery, LVL3, Chicago, IL (2012); On Forgery at LAXART, Los Angeles, CA (2012); Gray Day at the Roberts & Tilton, Los Angeles, CA (2011). Cooper has been written about in Artforum, LA Weekly, Huffington Post, Daily Candy, SF Weekly, San Francisco Bay Guardian, Daily Serving, Chicago Now, and
Frieze. Cooper lives and works in Los Angeles.