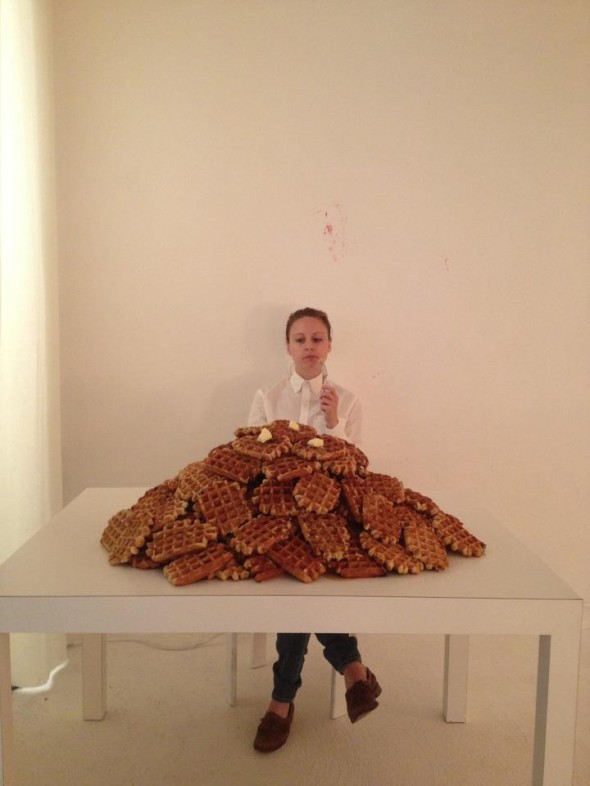 Allegra LaViola Gallery is pleased to present eat (installation) 2012, a multi-media exhibition by artist Anne Koch in the Project Space. Drawing on her interests in food, fashion, luxury and society, Koch has created a unique environment encompassing these elements.
During the five week run of the exhibition, a performer will be in-situ in the gallery, consuming a never-ending supply of food on a continuous basis. The foods change on a weekly basis – the performances are: eat (cheeseburger), eat (grapes), eat (spaghetti), eat (waffles), and eat (bacon) and will be ongoing throughout the opening times.

In addition to the ceaseless live feast there will be a table, set and prepared for a banquet to take place. Dining Room 01 will take place on June 13th and will be a lavish celebratory meal. The performer will continue eating food at a nearby table while the guests dine separately in the same space. The installation Dining Room 01 is a site-specific piece imagined for Allegra LaViola Gallery. The piece is only complete after a magnificent dinner party is held. The sharing of food and drink infests the space with memories of conviviality. Remnants that fade just as the aftermath of the feast will decompose.

In addition to the performative elements of the exhibition, there will be several static works. A series of whitewashed red paintings line one side and white knives protrude from the wall, releasing blood. Koch’s video performance (eat) series one, will be projected in one area of the installation. In (eat) we see Koch consuming various foods in different locations, surrounded by the daily activities of the place she is visiting, while she faces the camera and partakes of her meal. Koch eats with an unselfconscious humor—choosing foods that compliment the location—and facing the camera full on as she swallows and chews.

Our experience of food and eating is impossible to separate from our culture, and Koch delves into the sticky depths of gluttony, pleasure and perception, taking us to the edge of the acceptable notion of each. Visitors to eat (installation) 2012 will be invited to join in a sensory experience that fully envelopes them—they need merely not be afraid to take the first bite.

Anne Koch is a New York City and Paris based artist. She has presented her projects nationally and internationally. She performed her final (eat) piece at the Tate Modern in London, UK, and exhibited her film “(eat) lobster 2011” at Art Basel Miami in December of 2011. As a Production Designer in the fashion world, Koch’s eccentric designs and ideas have been featured in Vogue Italia, Teen Vogue, V, Harper’s Bazaar, Numéro, The New York Times, Elle, and Purple Magazine in collaboration with photographers such as Sebastian Kim, Terry Richardson, David Vasiljevic, Arthur Elgort, and Patrick Demarchelier.