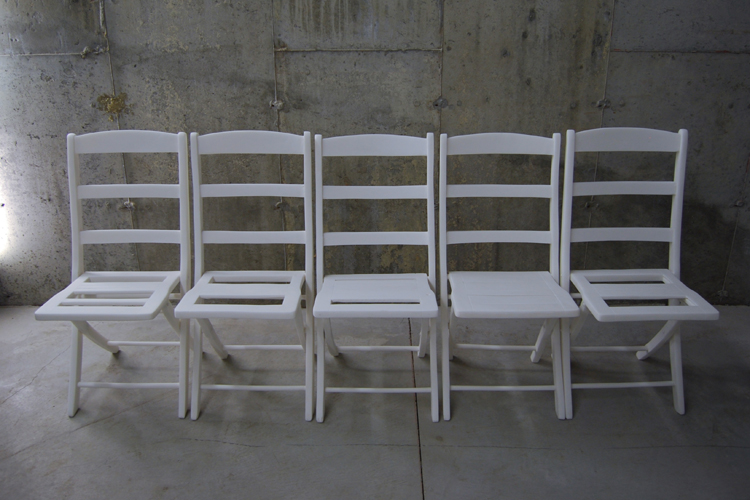 Austrian-born New York-based fashion designer Helmut Lang unveiled his 2009 sculpture piece, Front Row, at Barneys New York on Madison Avenue as part of the store’s collaboration with Greek art patron Dakis Joannou and his Deste Foundation for Contemporary Art. The sculpture was revealed alongside pieces from Jeurgen Teller and Parisian design partners M/M, Mathias Augustyniak and Michael Amzalag. Front Row was previously on exhibit at Frankfurt’s Museum of Modern Art and at Joannou’s foundation in Athens.  The sculpture not only references Helmut Lang, himself, as a designer, but also evokes notions of status, power, and fame, all integral elements in the world of fashion.  Lang created the piece in 2009 as the curator of Joannou’s DesteFashionCollection. Lang said of the piece’s new location in Barneys, “Sculpture is always good when it is violated by different circumstances. When it goes into a group show, or a different kind of presentation…it creates a new sense of the work.”  The sculpture’s central location in Barneys storefront is also a humorous wink by Lang, who retired from fashion in 2005 to pursue his art career.  By featuring his artwork in the exact place the store once featured his designs Barneys has given Lang’s sculpture even greater subtextual weight and perfectly demonstrates Lang’s new opposing viewpoint as an artist to the fashion world of which he was such an integral member.