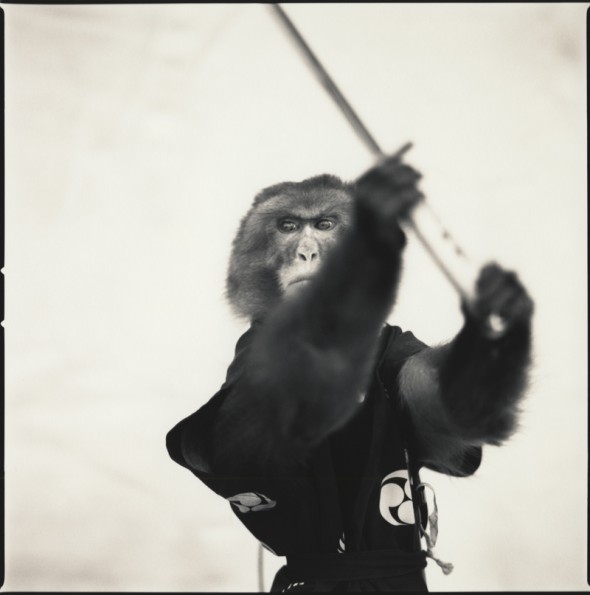 The Kopeikin Gallery is hosting an exhibition of photographer Hiroshi Watanabe’s series on dancing monkeys, or “Suo Sarumawashi,” through October 26.

Sarumawashi is an ancient Japanese artistic tradition that developed from a religious ritual signed to protect warriors’ horses to a highly popular form of festival entertainment performed all over Japan. Beginning in the 1970’s the prevalence and popularity of sarumawashi was threatened by Japan’s economic boom and rapid industrialization. Fearing the demise of this popular cultural heritage, a group of concerned individuals gathered and founded The Suo Sarumawashi Association in Hikari City in Western Japan to keep sarumawashi alive. Today, the association runs two theaters and tours frequently throughout Japan.

“The reason for Sarumawashi’s ongoing popularity lies in the charm and agility of the Japanese macaque monkey. Sarumawashi showcases the natural physical prowess of the Japanese monkey by combining acrobatic stunts with comical skits and dances. The monkey and trainer perform as one unit to create a bond between man and primate.” -Excerpt from the Suo Sarumawashi Association’s official introduction

Watanabe captures the charm, novelty, and human-like tenderness and wonder of the dressed-up performers in his collection of black-and-white images. You can see the collection online here.

0
The Untitled Magazine September 15, 2013
No Comments Yet