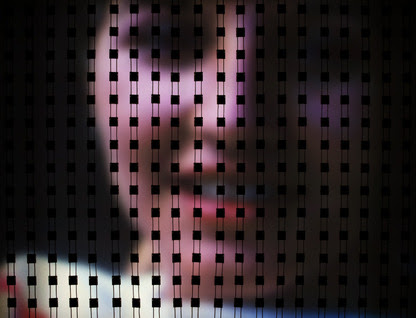 The Bryce Wolkowitz Gallery presents an exhibition of Jim Campbell, “New Work,” which will focus on the pioneering artist’s most recent series of sculptural light installations. A consummate innovator, Campbell is considered one of the leading artists working today in the field of new media.

The exhibition at Bryce Wolkowitz Gallery coincides with an expansive New York museum exhibition of Jim Campbell’s work. Organized by the Museum of the Moving Image, “Jim Campbell: Rhythms of Perception,”will be on view from March 21 – June 15, 2014.
In addition, New York’s Joyce Theater will present “Constellation,” a collaboration between Alonzo King LINES Ballet and Jim Campbell, from March 18 – 23, 2014. The performance will feature an installation comprised of 1,000 light spheres programmed in synchronized interplay with the dancers.

A former filmmaker, Campbell moved to interactive video installations in the mid-1980s and has been working with LEDs – light emitting diodes – since 1999.  His investigations with LED technology have produced immersive, illuminated, sculptural environments that vividly record and recalibrate the presence of time in relation to light, space, and the human condition. Simultaneously shifting the viewer’s perception through works that synthesize acts of observation, reflection, and engagement in an all-encompassing pictorial realm, Campbell deconstructs these grand optical illusions by revealing the mechanisms at play.

In three separate series on view at Bryce Wolkowitz Gallery: Topographies, Reconstructions, and Home Movies, the artist continues to challenge notions of image making and the experience of viewing by injecting color (an element rarely used before) into his illuminated palette. The exhibition includes panel projections comprising hundreds of LEDs strung from ceiling to floor in a grid that transmit low-resolution imagery distilled from found Kodachrome home movies; wall-mounted pieces, or topographies, composed of individually-scaled LEDs that comprise a gradient picture plane; and a series of four color LED-based bas reliefs, whose transparent, molded, resin front pieces act as both surface and content.

While his earlier LED-based transformative works – primarily featuring pixilated views of fleeting activity or quotidian events – relied on video as content, Campbell’s focus has recently turned more towards materiality and process. The new works “hover on the edge of abstraction, re-abstraction and representation,” says Campbell, and investigate how perception, as a visceral phenomenon of time and memory, can be altered, filtered, or manifested through the layering of media.

UPCOMING ART FAIRS
The work of Jim Campbell can also be seen at two upcoming art fairs in New York: The Armory Show from March 6 – 9 at Piers 92 and 94 and The AIPAD Photography Show New York from April 10 – 13 at the Park Avenue Armory.

MUSEUM OF THE MOVING IMAGE
From March 21 – June 15, 2014, the Museum of the Moving Image will present “Jim Campbell: Rhythms of Perception.” The exhibition will feature over 20 works that span his 30-year career, including early experimental film; interactive artworks; low resolution videos; large-scale installations, and new, never-exhibited work. Highlights include the rarely shown “Last Day in the Beginning of March, 2003,” a work that features 26 suspended light bulbs accompanied by a soundscape and evokes the last day in the life of the artist’s brother; “Home Movies, 1040-1, 2008”; two installments from his “Motion and Rest” series, 2002; “Exploded View (Commuters), 2011”; and earlier works such as “Shadow for Heisenberg, 1993-94,” and “Color by Number, 1998-99.” For more information, please visit: www.movingimage.us.