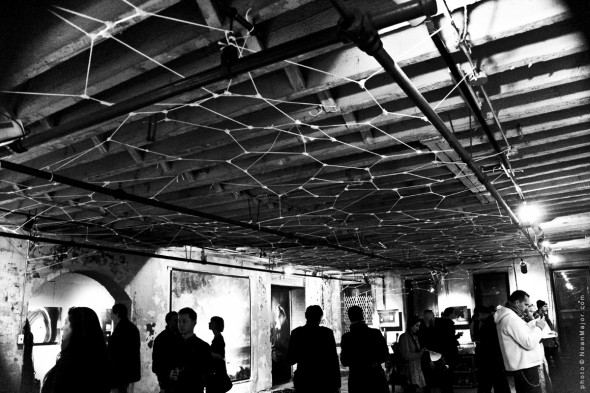 The Website installation was conceived and installed by Joseph Grazi for the (Un)Fair art exhibition during NYC Armory Week 2013. Using over two thousand feet of white rope, Grazi engulfed the entire ceiling and two walls of the main gallery with a white geometric spider web from floor to ceiling and then back down to the floor. In a room filled with an intimidating array of stunningly large realist contemporary paintings, white rope crept up the walls and onto the ceiling like white geometric vines, creating hundreds and hundreds of different linear shapes, each one pulling against the other to form shapes ranging from mere triangles to complex octagons. The installation was installed one rope at a time, with each subsequent rope directly attached to the one before. This caused a sort of butterfly effect, where a vibration from one end of the web would be felt all the way at the other. Each rope relied on the next one tied to it for structure, and if one failed, they would all fail. Grazi built the installation in two over night shifts of 16 hours consecutively each night. 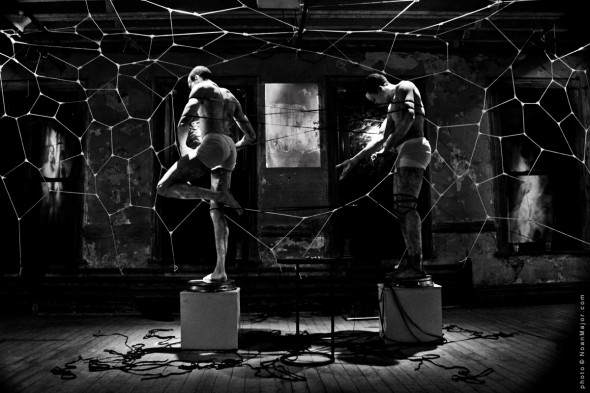 As a parallel piece, performance artist Brian Gonzalez, AKA Taxiplasm, created The Seeds that Bind, a site-specific peformance piece performed each night in front of the web. Two models stood covered in white powder on short metal cylinders that rotated their bodies slowly enough to make it appear as if they were actually moving slowly through time. The models were then bound together by circles of rope that audience members were invited to cut, with the mere suggestion of a scissor sitting silently on a podium nearby. As the ropes were cut, they started to spin with the models as the two bodies continuously turned and moved in unison with one another. As the ropes disappeared, the models began a transformation in to slow motion freedom, eventually becoming completely unbound from one another, as the performance came to a climax.