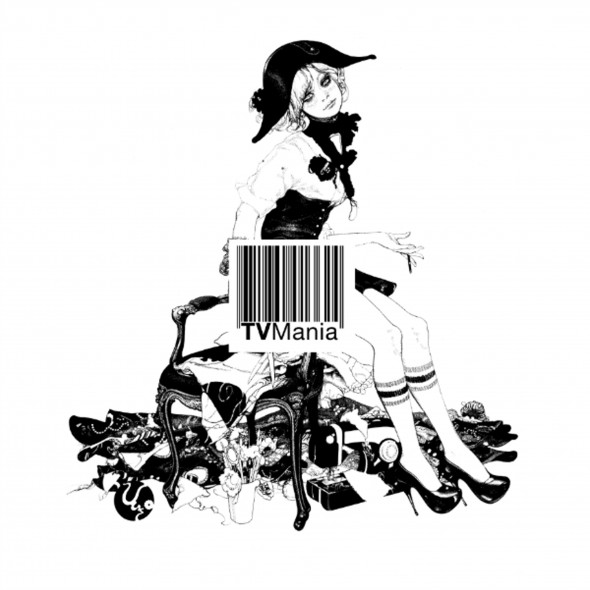 Back in the mid-90s, Duran Duran’s keyboardist and founding member Nick Rhodes and guitarist Warren Cuccurullo had what turned out to be a premonition of a society in which voyeurism was woven into the cultural fabric. In wanting to share their vision of the future, they created its soundtrack in the form of an album called TV Mania: Bored With Prozac and The Internet?, that they also intended to turn into a Broadway musical.

The tracks were constructed by blending television samples and looping rhythm tracks to create a sonically sophisticated collection of songs that now serve as the perfect backdrop for the frenetic energy and atmosphere of today’s digital age. Shortly after they completed the final mixes, the original tapes were stored and the project was temporarily shelved as other priorities took hold. The intention was always to find the time between Duran Duran project cycles to go back and release the album – perhaps around some anniversary of its inception. Although they discussed it often over the years, the tapes were thought to have been lost, so it wasn’t until recently when going through material at an out-of-town storage facility, to digitize old masters that were held there, Rhodes discovered the original TV Mania tapes misfiled, and he swiftly decided they were long overdue for a release.  On March 11, 2013, the TV Mania project will finally see the light of day on vinyl and a limited edition box set through The Vinyl Factory and digitally via The Orchard/Beatport.

Produced by TV Mania (Rhodes and Cuccurullo), Mark Tinley and Anthony J Resta, and mixed by Bob St. John, Bored With Prozac and The Internet? is a conceptual soundtrack for what the duo imagined as a “bizarre TV cyber soap opera,” about a family who gives away their freedom to scientists in exchange for a Hi-tech modern lifestyle and reality show fame. With song titles like “Yoghurt and Fake Tan,” and “Using A Hidden Camera—Eyes In The Sky,” the pastiche of cool beats and conceptual content proved more prescient than its creators could ever have anticipated.

“We were envisioning a world where a family would give up their day-to-day privacy and allow their existence to be televised to the masses, and this was two years before the film, The Truman Show and four years before Survivor,” said Cuccurullo. “Now everyone is giving away their most intimate details online and on reality TV.”

At the time of the album’s creation, the Internet was in its infancy and reality TV only existed in the form of MTV’s hit show The Real World.  Back then, the TV shows we indulge in today could only be imagined as pure science fiction. Aside from reality TV, the album also explores a broad range of other modern themes, including virtual shopping, surveillance, pharmaceutical drugs, fashion, film, fame and faith. All of which are now ubiquitous in our society, but mostly were not then.

“When I found the master recordings, I thought ‘Wow, this sounds unbelievably contemporary’” said Rhodes.  “When we put them up on the system, it was not only a great surprise, given what we had thought their fate was, but it was also literally like finding a painting and blowing the dust off of it.  Times have certainly changed since we made the record, but the subject matter that inspired this album happens to be at the forefront of today’s world, so the songs have weathered the test of time in a strangely beautiful way.”

The Vinyl Factory will release both limited Boxed and Gatefold editions of Bored With Prozac and The Internet?  In addition to the vinyl featured in the gatefold, the limited edition boxed set will also include exclusive Polaroid photographs shot and signed by Nick Rhodes, screen printed artwork, a personally authored note by Warren Cuccurrullo, and an oversized glossy booklet featuring exclusive imagery. The Vinyl Factory collaborates with musicians and artists to create premium vinyl editions. In 2012 the label released records by artists including Florence + the Machine, Roxy Music, Massive Attack, David Byrne and Martin Creed.

The tracks from the album “Beautiful Clothes”, “Euphoria”, and “I Wanna Make Films” have recently been remixed by the likes of MNDR, The New Sins, Monikker and MSTMX, and will be released digitally via Beatport in the coming month.

Duran Duran fans may recall a single produced by TV Mania, “Electric Barbarella” off the album Medazzaland.  Released in 1997, the song became the world’s first digital download to be sold online . Perhaps the duo has a talent for clairvoyance!

TV Mania: Bored with Prozac and The Internet?

Stay tuned for The Untitled Magazine’s exclusive interview with Nick Rhodes about TV mania in the forthcoming Music Issue 6, to be released in April / May 2013.

0
The Untitled Magazine February 6, 2013
No Comments Yet