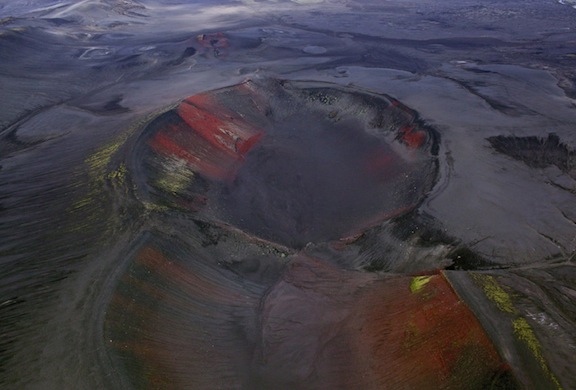 Throughout the past two decades, Eliasson has used installation, painting, photography, film and projects in public spaces as tools to explore the cognitive and cultural conditions that inform our perception. From immersive environments of color, light and movement to installations that recontextualize natural phenomena, his work defies notions of art as an autonomous object, and instead positions itself as part of an exchange with the actively engaged viewer and his or her sensorial and individualized experience. Described by the artist as “devices for the experience of reality,” his works and public projects prompt a greater sense of awareness among their users regarding the ways in which they both interpret and engage with the world.

During his regular trips to Iceland, Eliasson has over the years created series of photographs documenting the country’s unique landscape. In the broader context of his practice, photography continues to be a vital part of his conceptual inquiry as he elaborates on the seeing and sensing processes, examining perceptions of time, space and movement as both cultural constructions and natural phenomena.

As part of the artist’s seventh solo exhibition at the gallery, Eliasson will show three new composite series from his journeys to Iceland over the past two years. Presented in precise grid formations throughout the main gallery space, each project consists of dozens of photographs that focus on a particular element of the country’s landscape. In his largest series of sixty-three photographs along the far gallery wall, Eliasson presents a small encyclopedia of Iceland’s major volcanic craters. Evidence of the island’s location along a tectonic plate boundary, volcanoes have always been a significant part of the country’s geological landscape, history and cultural identity. For Eliasson, however, they represent vents for the earth, thresholds that make the earth’s interior explicit.

In the neighboring Hot spring series (2012), the artist probes perceptions of distance and volume through shifting scales. This project documents forty-eight of the country’s geothermal hot springs, an iconic part of Iceland’s terrain and substantial source of natural energy. Similar to The volcano series (2012), Eliasson chooses to photograph the landscape from varying distances, using his movement to play with notions of scale and range, and demonstrate their relativity. Within his individual frames, even the smallest hot spring as narrow as two feet wide appears comparable in size to the nearby craters. Through these shifting perspectives, these photographs project a new way of seeing and perceiving, one that is both dynamic and negotiable.

The final photo series in the main space focuses on a particular form of architecture found in the most remote areas of Iceland. Photographed during the artist’s springtime hikes through the country’s highlands, these rescue shelters, hiking huts and hunting cabins represent small signs of habitation and community – “micro-parliaments,” as Eliasson puts it – within vast expanses of land and sky. In this series, the grid not only functions as means of presentation but also plays on the idea of an urban grid and relates back to the artist’s Reykjavik series (2003).

The exhibition continues into the rear gallery with unique large format landscape photographs that are part of The large Iceland series (2012). This project supplements the Iceland series, an ongoing body of individual photographs taken during Eliasson’s travels in Iceland since 1993. While these works relate strongly to the imagery depicted in the artist’s grid series, they tend to focus on his interaction with broader scopes of terrain rather than a single topological subject.

Notions of movement, time and landscape are addressed in Your disappearing garden (2011), a room-size landscape of obsidian rock that fills the gallery’s main second floor space. A powerful complement to The volcano series, this installation recreates a portion of the volcanic landscape as inspired by Eliasson’s own hikes through the obsidian fields of Hrafntinnusker located in Iceland’s highlands. As viewers engage with this piece and glimpse reflections of the surrounding gallery space and their own bodies and movements in the glassy surfaces, they begin to renegotiate linear perceptions of space as well as the line between reality and representation.

The volcano series and The hut series will also appear in the artist’s concurrent exhibition at neugerriemschneider in Berlin, Germany.