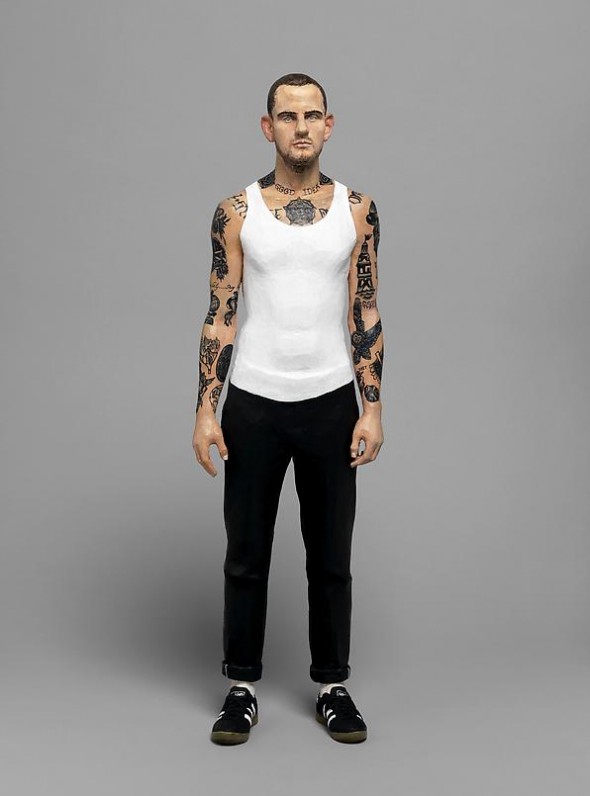 OPEN TO THE PUBLIC NOVEMBER 8 – DECEMBER 21

Marc Jancou Contemporary announced the first New York exhibition by Tomoaki Suzuki in nearly a decade. Opening with a reception on November 8th, the show will be on view through December. It will present five new sculptures by the Japanese-born, London-based artist.

Suzuki’s life-like figures combine traditional Japanese woodcarving techniques with contemporary portraiture. Created in limewood at roughly one third of human scale, these sculptures depict the artist’s friends and acquaintances, as well as passersby he encounters on the street near his studio in Dalston in Hackney, East London. Suzuki characterizes his process as “obsessive”: each sculpture begins with a series of fifteen to twenty sittings, totaling thirty hours spent with his subject in the studio. During this time, their conversation is as important to the artist as the photographs he takes from every angle, which he then spends months translating into drawings of each figure. From these drawings, he carves his portraits in limewood before painting them by hand in acrylic.

Fascinated by fashion and its signifiers of Western consumerism and multiculturalism, Suzuki painstakingly recreates his subject’s actual ensembles in vivid color and detail. Displayed on the floor without pedestals or protective barriers, these sculptures inhabit our physical space and elicit our identification and empathy.

Born in Ibaraki, Japan in 1972, Tomoaki Suzuki studied at Tokyo Zokei University before earning his MA in Fine Art from Goldsmiths College, London and his MA in Sculpture from City & Guilds Art School, London. He has been the subject of solo exhibitions at the Museo Marino Marini, Florence (2011); the Towner, Eastbourne, UK (2010); SCAI The Bathhouse, Shiraishi Contemporary Art Inc., Tokyo (2010) and Corvi Mora, London (2008). His bronze sculpture Carson can currently be seen on New York City’s Highline, where it is included in the park’s inaugural group exhibition, “Lilliput.“