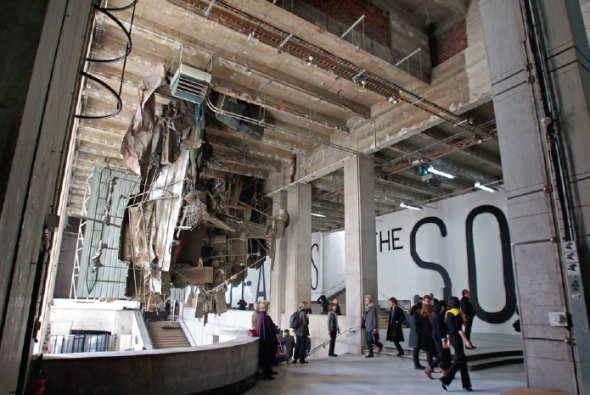 On April 12, the Palais de Tokyo reopened its doors after undergoing a ten-month long renovation.  To celebrate the completion of its construction, Paris’s most influential contemporary arts center stayed open for twenty-eight hours for a non-stop event that included performances, live music, videos, lectures, and art installations.  Artists, including Christian Marclay, Peter Buggenhout, Julien Salaud, and Dan Perjobschi, were invited to create site-specific work in honor of the day-long opening celebration.  The huge, modernist building that stands on the Right Bank of the Seine and houses the Palais de Tokyo was first built in 1937 to celebrate the World’s Fair, and, in the past, was utilized as an exhibition space, film school, and archive.  In 2002, the Palais de Tokyo first installed itself in those environs after completing the initial stages of their renovation on the building, which had previously been closed off to the public for more than three decades.  Construction on the arts center was funded by the French state, and overseen by the Palais de Tokyo’s new president, and longtime curator, Jean de Loisy.  In reconfiguring this massive space to be more conducive to museum-goers, architecture firm Lacaton & Vassal focused on filling what is now the biggest contemporary arts center in Europe with natural light, installing clerestory windows and adding a Gare Saint-Lazare style glass roof to the main gallery.  The architects wanted to continue what they began in the first renovations, exploring the full potential of the immense space.  Lacaton said of the new windows in the 236,000 square foot space, “it gives a quality of transparence.  There’s now a certain lightness and even fragility.  My wish is that after every exhibition, it would become empty and then recomposed again.  There is a real freedom of use.”  The four floors of exhibition space demonstrate the museum’s dedication to mixing medias and disciplines, combining visual arts, design, music, and fashion. The contemporary arts center also houses Le Pavillon, a studio space for young artists.  The Palais de Tokyo officially opened to the public on April 20 with a triennial exhibition entitled Intense Proximity: Art as Network, on display until August 26, which features over 113 contributors from 40 different countries.  Renovations are also still ongoing, with a second restaurant, Tokyo Eats, and a four-hundred-seat screening room still to come.  The Palais de Tokyo has always been a Parisian bastion of contemporary, progressive art and culture, and with its new expansion it has firmly cemented itself as a cornerstone of the European art world.