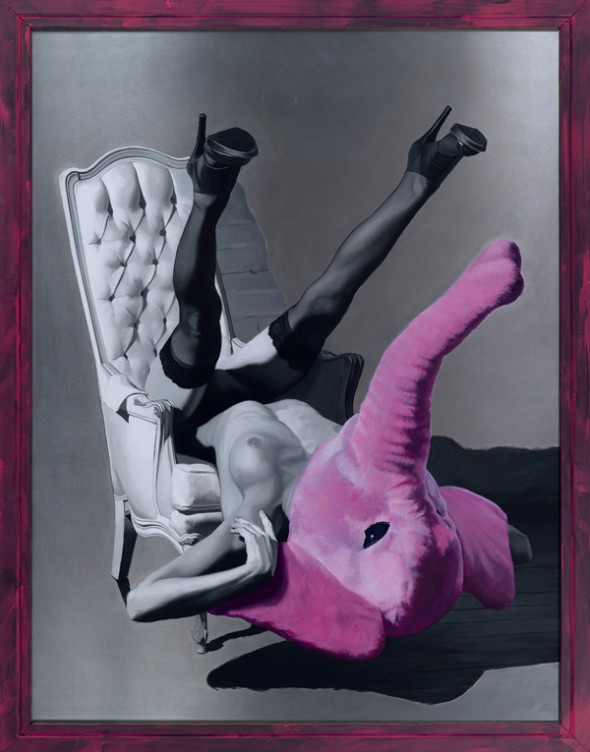 An exhibition of photography and paintings by Michael Sagato, entitled Delirium Tremens, went on display on April 11 at the Joseph Nahmad Gallery in SoHo.  Michael Sagato has quickly become the talk of the art world, having already shown at Art Basil and done his first solo show at Milk Gallery.  Sagato has a remarkable ability to draw on surreal images mixing them into his hyper-realistic style of painting, noting some of his biggest artistic influences as John Singer Sargent, Odd Nerdrum, William Adolphe Bouguereau, and Walt Disney.  The title of his exhibition, Delirium Tremens, refers to what’s commonly known as “the shakes,” which happens to people suffering from alcohol withdrawal.  A tongue-in-cheek title for a collection of photos and paintings featuring nude women who, rumor has it, are, in reality, notable fashion models whose identities have been protected thanks to a huge, pink elephant head.  Making these women into the very animal drunkards are often accused of seeing suggests to the viewer that these images are in fact creations of their own inebriated fantasies run amok.  Pink elephants spin around stripper poles in pasties, do coke off tables, make out with each other, or just pose suggestively in lingerie.  Just like any hallucination, however, this show is only up for a very limited time, so make sure to see the pink elephants before they disappear!