Restoin Roitfeld and Valmorbida curated a solo exhibition of RETNA’s art in a pop-up gallery close to the Hudson. Marquis Lewis, the man behind the alias RETNA, began his career as a graffiti artist in his native Los Angeles. Lewis was born in 1979, right before the burst of street art surfaced and became part of LA’s identity. This era of often gang and violence influenced tags crossed boundaries of art and beauty on the streets, and was highly influential on the formation of RETNA. A prominent figure in the rising of the graffiti movement in the 1990’s, Lewis began his work as a mere teenager, and has since moved his compositions from freeway overpasses to the walls of galleries.

The pop-up gallery was literally overflowing with people; a who’s who of the art and fashion world were in attendance to check out his work, which was presented in an uncompromisingly intense display of painting after painting on the warehouse style walls. The abundance of works had a dramatic impact, yet also gave the appearance that some of the works may have been a bit rushed. His style is inescapable, with the graphic black and white brush strokes that immediately come across as a hybrid of hieroglyphics. Over the course of the evening, Retna painted a variety of massive sculptures in the middle of the exhibition space, giving his awestruck audience a live performance of his work.

His current works are characterized by his series of scripts that resemble a cross between characters from Arabic, Hebrew, Asian calligraphy, Greek symbols, hieroglyphs, and Incan writing systems. These cryptic yet graphic symbols juxtapose the visual with the verbal, as well as reference his own diverse background, of African-American, Cherokee, and Salvadoran roots. Through his art of invented words and symbols he disguises messages, such as poetry, thoughts and names. RETNA delivers a challenge to his audience, asking them to percieve thoughts through a different medium, of language transposed into bold designs with still a bit of a rough edge, a remnant of his past on the streets.

After the exhibit, the party continued at Indochine, where Vladamir and his mother Carine Roitfeld (the former Editor in Chief of French Vogue) and sister Julia Roitfeld partied the night away to Dj’s and champagne with guests including Stavros Niarchos, Katherine Keating, Sante D’Orazio, Nellee Hooper and Genevieve Jones. 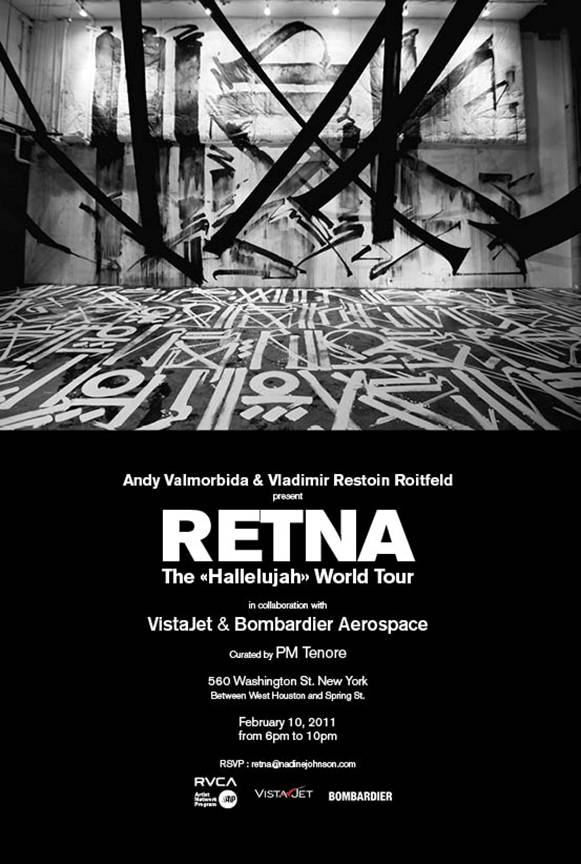