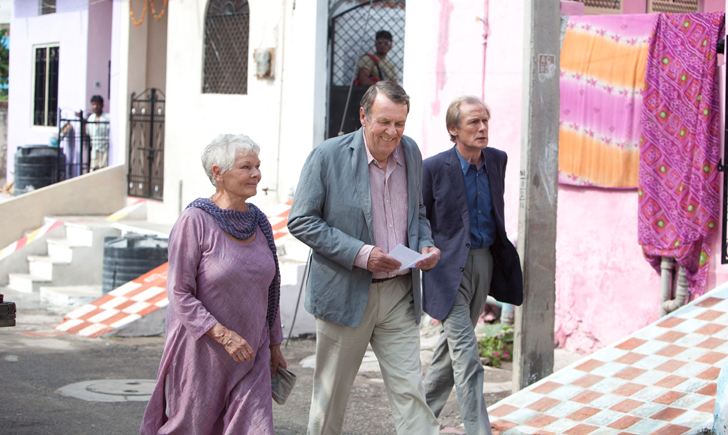 The Best Exotic Marigold Hotel, directed by John Madden, follows a hodgepodge group of British retirees, including Bill Nighy, Dame Maggie Smith, Dame Judi Dench, and Tom Wilkinson, who feel displaced and undervalued at home, and decide to shake up their lives by retiring to India where they can stretch their limited pensions.  Enticed by too good to be true advertisements, the group arrives at The Best Exotic Marigold Hotel where they find out they’re staying in the what is now the shell of a former Indian palace.  Daunted, but undeterred, the elderly travelers, for the most part, set out to make the most of their new lives and experiences.  The characters slowly allow their tough, British exteriors to crack, letting India bring out their real, vulnerable inner selves.  Muriel (Maggie Smith) comes to India a spiteful, bitter racist, and, by the end, becomes one of the kindest, most magnanimous women there, working behind the scenes to make sure everyone’s personal affairs work out.  While Judge Graham (Tom Wilkinson) who has led a life of bitter repression in fear of immense contempt and hatred, is allowed to finally feel forgiveness, acceptance, and openness for the first time in his life.  Each character, through their new environment, is given the chance to grow and change despite their advanced age.  Even Jean (Penelope Wilton), for example, who detests every minute she’s there, but, because of her self-induced isolation and loneliness, Jean ends up learning more about who she is and what she needs as a person than she ever could have imagined.  This film is not a deeply profound or insightful look at the cultural problems facing seniors, but it is a refreshing take, not only on the traditional romantic comedy, but also on stereotypes our society casts the elderly in.  These people are not simply caricatures of “the nice, old lady” or “the crotchety, old man,” they have depth and substance, just as one would expect from someone who has lived so long and so fully.  This film reinforces how these people’s lives, memories, and selves are not destroyed with the advancement of age, but if anything are amplified tenfold.  The plot is highly predictable, not a surprising fact considering the film’s repeated refrain, “In the end, everything will be ok, and if it’s not ok, it’s not the end.”  However, despite this, delightful performances from an exceptional cast of actors, and jokes that poke fun at our pre-conceptions of old age, keep the film from feeling too heavy or getting bogged down in it’s own message. The Best Exotic Marigold Hotel is a sweet film with endearing characters that you want to root for.  Despite its somewhat weak plot, and, at times, overindulgent melodrama, this is a cute and lighthearted movie that will strike a chord with any age group.