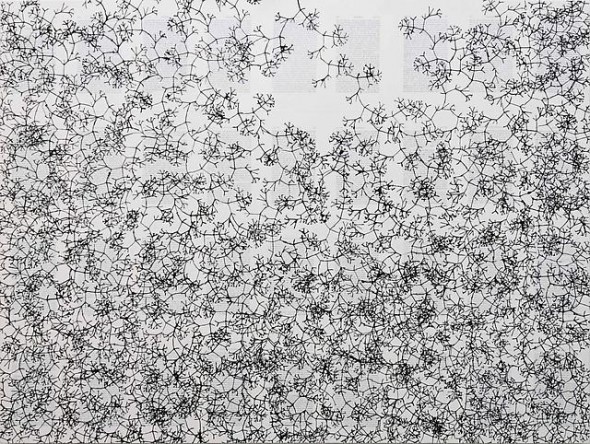 Lehmann Maupin will be presenting an exhibition titled On the Origin by Tim Rollins and K.O.S. at their 26th street location in New York from November 7 to December 28. On the Origin will feature a series of new additional work inspired by the English naturalist whose work laid the foundations of evolutionary theory and marks the collective’s third solo show at Lehmann Maupin.

To create On the Origin of Species, Rollins and K.O.S. appropriated a sketch from Darwin’s 1837 notebook that puts his theory of evolution into visual form. The abstract diagram has a tree-like structure and is commonly referred to as Darwin’s “Tree of Life.” Working intuitively, the group copies, layers, and repeats Darwin’s simple image over book pages to create a sprawling complex configuration. Rollins and K.O.S. explore the essence of Darwin’s ideas through the repetition and duplication of the image to achieve a greater construct. Rollins and K.O.S. also relate this process to a model for social action, noting the ability for one idea or person to inspire and create an outcome greater than the individual.

Tim Rollins studied fine art at the University of Maine and earned a BFA from the School of Visual Arts in New York. After graduate studies in art education and philosophy at New York University, Rollins began teaching art for special education middle school students in a South Bronx public school, launching the Art and Knowledge Workshop in the Bronx together with a group of at-risk students who called themselves K.O.S. (Kids of Survival). Rollins and K.O.S’s collaboration now spans over three decades.