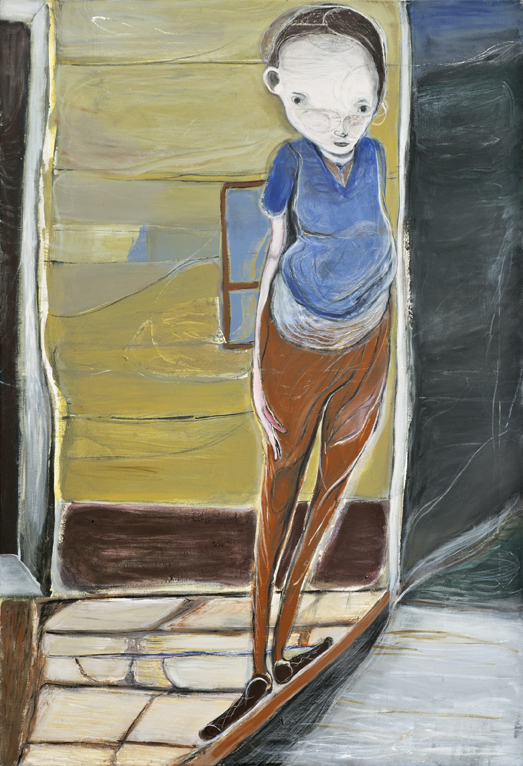 Waldemar Zimbelmann´s pictures shift between painting and drawing, but it is the character of drawing that is essential in the shaping of his works. Occasionally starting out with personal or anonymous photographs, the artist develops a subtle, sensitive visual language, which brings forth its subject from an overlapping of figuration and abstraction. Zimbelmann´s work derives foremostly from a process of layering color, which is mirrored in his motif as the passing of a situation.

A selection of paintings from the last two years, which give insight into Waldemar Zimbelmann´s artistic practise is on display in our gallery. He completed his studies and was a master student with Erwin Gross at the Karlsruhe Fine Art Academy in 2010. Zimbelmann´s single or group portraits of people engaging in mute (inter-)action exist in his pictorial space as shining and fading figures whose bodies – as projection surfaces and allegories at the same time – deal with the shift between localization and rootedness.

Heads with mingling facial expressions of different characters can be seen, moving between the realms of emotional exterior and interior, as well as architectural interior and landscape. Zimbelmann´s characters face the viewer with a gaze that is introverted, broken, almost artificial, however, it also allows a situation of open eye contact between the depiction and the viewer. Waldemar Zimbelmann´s paintings reveal transitory situations which capture the process of a movement, and equally, come into being even at the instance of viewing.

The often merely suggested silhouettes of humans, animals, houses or landscapes leads into a dissolving of shape, body and space. The break with, and transgression of a continuous relationship between space and time is also evident in the texture of the tableaux: the sculptural surface of the canvas increases the pictorial space by a factual depth, which conveys itself to the viewer through the materiality of the painting, capturing the sketch-like aspect of the work as a material signature.

The various stratifications of paint which arise from the process of overpainting cause a layering in Waldemar Zimbelmann´s composition, layers of colour out of which the artist peels his subjects by uncovering layers. The lines, sometimes carried out as sgraffiti, are finely hatched lines, almost reminiscent of woodcuts, which oppose the strong, sometimes flat coloring of his canvases and create a vibration in the pictorial space – allowing the viewer to fall into the painting.

Phantasmagorias unfold in Waldemar Zimbelmann´s painting: Permeated by a dynamic immanent to the image, along which the composition of his pictorial space develops, temporal and spatial levels overlap, from which Zimbelmann´s surreal narrations evolve. They exist as foreign traces, captured in the interior space of the canvas, which detatch themselves from the gestural imprint in their abstraction, and develop as associative processes of action and shaping for the viewer.