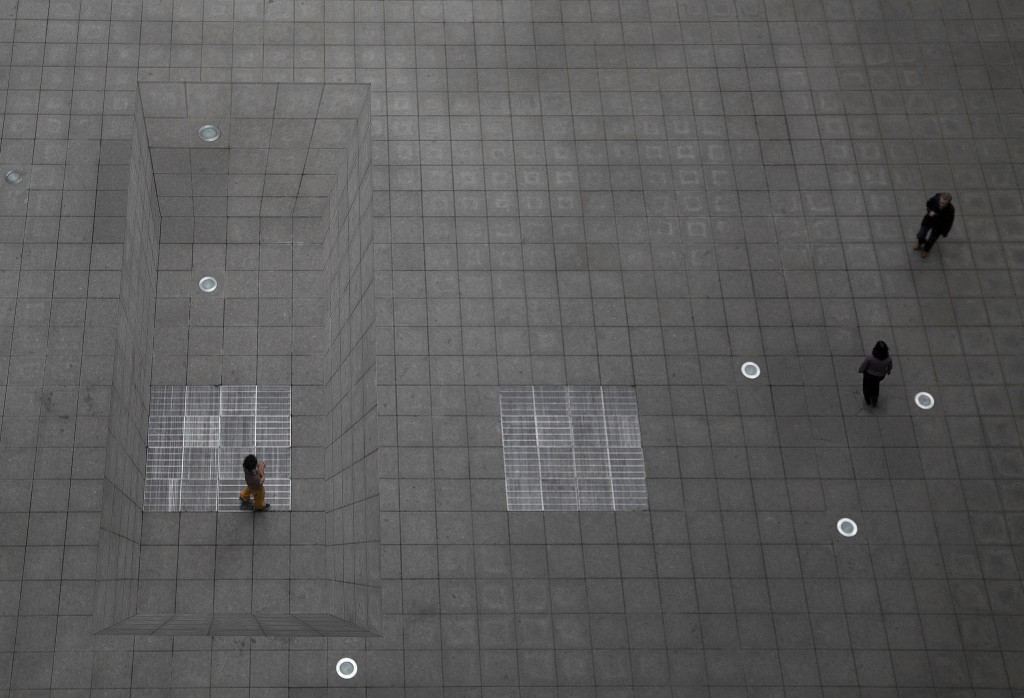 A Matter of Space, German artist Wolfram Ruoff’s current exhibition at SoHo gallery Sous Les Etoiles is a quiet, poetic photographic incarnation of the modern human condition. This is the artist’s second show at the space, which also specializes in digital retouching and present artwork conceived with similar technology, and Ruoff’s current aesthetic offering fits well within the gallery’s vision. For this particular series, the photographer and architect took pictures of anonymous city-dwellers walking through urban spaces in global metropolises such as Rome and Tokyo. Through digital manipulation, Ruoff reconstructed the spaces within the images? creating perfect, seamless geometric cubes around the moving individuals, freezing them with the camera’s lens, and then again within the artificial confines of Ruoff’s imagined urban design.

The aesthetic effect of Ruoff’s particular technique is jarring. At first glance, the images appear simply to depict the city-dweller as small cog in the urban wheel: minuscule, arbitrary and powerless compared to the great heights and vast expanses of the (ironically man-made)concrete jungle. This notion has become accepted in the lexicon and myth of the city, a jaded version of the mid-nineteenth century Parisian flâneur, a pessimistic (but no less awe-filled)version of city existence as it appeared in Walter Ruttman’s 1920 ode to Berlin, Symphony of a City.

Upon further inspection, however, Ruoff’s images offer more. In Beyond the Lines, an aerial view of a modern city square presents the dark, ant-like figures as they scurry across the square’s cement grid. One figure stands out, however. To the left of the picture plane, Ruoff has manipulated the space so that a cubic depression seems to enclose the figure. Pictured in mid-stride,then, this unfortunate soul is trapped within Ruoff’s physical creation, literally caged in the urban design of an anonymous world capital, moving forward but going nowhere, a static Giacometti paralyzed in the Sisyphean task of modern life. Métro, boulot, dodo, indeed.

A nod to minimalism is clearly at work here, due to both the Sol Lewitt-like grid of the square,as well as Ruoff’s stated interest in the physical relationship of the individual to his surrounding space. Tony Judd’s sculptural discussions of the gestalt – the unified, whole form and the viewers perceptual and experiential understanding of that concept – come to mind. Richard Serra’s work presents perhaps a stronger corollary, insofar as his sculptures act as physical authorities. His Torqued Ellipses, examples of which are today so beautifully housed at Dia:Beacon, physically encapsulate the viewer, inside and outside are blurred, and the viewer’s progressive surrender to the sculpture evokes more general notions of architectural mind control. Here, Ruoff the architect becomes apparent, for the photographs allude to a greater discussion of the nature of city architecture and its role in the social psyche. Indeed, beyond pure design, architecture has historically played a profound role in the psychological shape of a culture, as well as in its physical form. One need only consider the Roman coliseum (and its fascist legacy, Berlin’s Olympic Stadium, a significant National Socialist symbol) to arrive at such a theory.

Ruoff’s images are the most potent when considered in this way, as physical manifestations of a psychological space. Indeed, in the press release for this exhibition, Sous Les Etoiles Director Corinne Tapia makes a pertinent link between these works and Michel Foucault’s notion of heterotopia, the simultaneously physical and mental locale of otherness in human geography.Ruoff’s works depict places indeed, however, in a very postmodern gesture, the boundary between the physical place and the mental one has been eroded, and the figures that appear in these images thus occupy conceptual and geographical locations interchangeably. What arises is an uncannily beautiful aesthetic musing on the nature of modern life, a successful and appropriate photographic treatise on what and how we and inhabit.

THE ART OF LOVE BENEFIT AUCTION AT MILK GALLERY