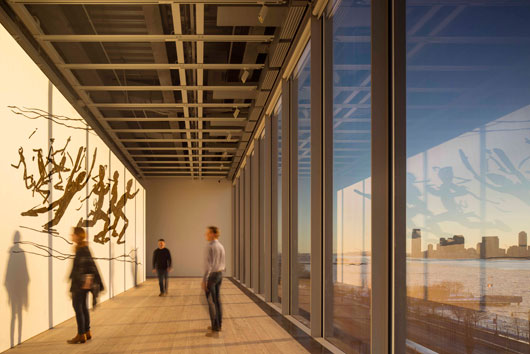 The Whitney Museum of American Art will open its new Renzo Piano–designed home at 99 Gansevoort Street on May 1, 2015, with an exhibition America Is Hard to See that reexamines the history of American art from 1900 to today. The exhibition presents new perspectives on the Whitney’s collection, reflecting on art in the United States with more than 600 works by some 400 artists. Its title is taken from a Robert Frost poem that was also used by the filmmaker Emile de Antonio for one of his political documentaries. America Is Hard to See is the most extensive display to date of the Whitney’s collection.

America Is Hard to See examines the themes, ideas, beliefs, visions, and passions that have preoccupied and galvanized American artists over the past one hundred and fifteen years. The exhibition’s narrative is propelled by a dynamic sense of invention and conflict, as artists struggled to work within and against established conventions – often directly engaged their political and social contexts. Works of art across all mediums will be displayed together, acknowledging the ways in which artists have engaged various modes of production and broken the boundaries between them. Numerous pieces that have rarely, if ever, been shown will appear alongside familiar icons, in a conscious effort to challenge assumptions about the American art canon.

Installed throughout the building, America Is Hard to See is organized as a series of twenty three “chapters,” sections that build on a particular theme through related artworks. Each chapter is named after a work of art that appears in that section of the show. The exhibition unfolds chronologically, beginning with a display relating to the Whitney’s origins.

The majority of the exhibition will be on view through September 27, 2015, with some floors closing on a staggered schedule before and after that date.

"DIOR AND I" FILM REVIEW: ROUGH CUT OF RAF SIMONS THE UNDERDOG