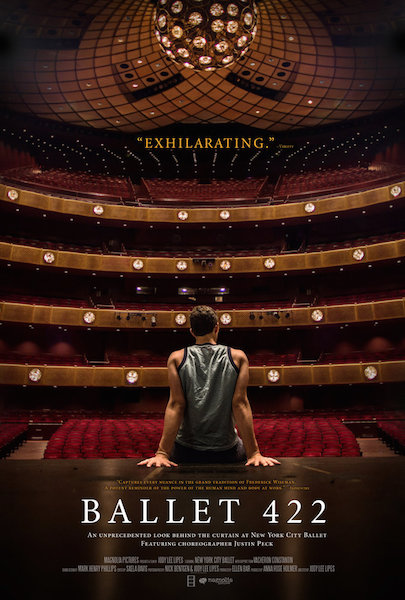 It is one thing to be honored with the privilege of choreographing a piece for the New York City Ballet. It’s another thing to be a member of the corps de ballet – the lowest rank in any company. But for Justin Peck, who has done both, it means having unprecedented access to some of the world’s most elite dancers to inspire his own artistic direction. Tall, slender, and somewhat disarming, the now 27-year old dancer was the subject of a documentary film released in 2014, Ballet 422. It is set to be released in theaters on February 6, 2015. He moves in the studio, on the stage, and in between the frames of Ballet 422, directed by Jody Lee Lipes, with an air that’s demure, and yet legitimate. In spite of his age, there’s something promising about Peck’s talent.  Or at least that’s what Lipes and NYCB’s artistic director Peter Martin would say. Watching Ballet 422, you can sense that something extraordinary is happening inside the dancer’s head. Lipes invites us to be a fly on the wall to observe not only the wonderful creative process of making a ballet, but also the mind of an individual whose name is worth remembering.

In 2012, NYCB commissioned Peck to choreograph what would become his third original piece for the company for their 2013 winter season. Set to Bohuslav Martinů’s Sinfonietta la Jolla, Peck’s creation, titled Paz de la Jolla, is also the company’s 422nd ballet. As the only company dancer to have ever choreographed a ballet exclusively for his other 90 colleagues, this is a feat that doesn’t quite fit the ballet narrative of moving from corps member to soloist to principal dancer. It’s a different kind of feat — one that requires more than just technique, musicality, passion and drive  — after all, to create and direct is to command another part of your brain.

Lipes is no amateur when it comes to the art of documentary. Opting out of the traditional investigation approach of Q&A, Lipes uses his camera to share with us sparse and intimate glimpses of what goes on behind the curtain. We watch, from the beginning, as abstract doodles in a notebook morph into a full-on ballet. The process is easier said than done. Not to mention, Peck has only two months to create and perfect his vision before it hits the stage.

“Can she take a break?” the ballet master working with Peck asks about principal dancer Tiler Peck (no relation) after they’d been rehearsing for an hour straight. Lipes hones in on Peck’s expression, which is vacant; his mind is elsewhere, creating and re-creating steps that are not readily or steadily available to direct. “Oh, yeah,” he says. And hastily he goes over the notes with his partner.

In another scene, Peck repeats “no” over and over as he tries to explain to a dancer that her arms should be folding in before extending out from the elbows. “No, do it again,” he says. “It’s not in my body yet” she confesses and nervously laughs after screwing up for the third, fourth, and fifth times. Peck doesn’t laugh, and this is somewhat unnerving. Is he going to yell? Storm out? Will he act like all the flagrant choreographers we’ve seen depicted in films about dance? No. Peck is patient. Not just that, but — and this is also part of what makes this documentary such a thrill to watch — Lipes neither romanticizes nor terrifies the audience about the straightforwardness with which people in the dance world are accustomed to being.

See the trailer for Ballet 422 below: