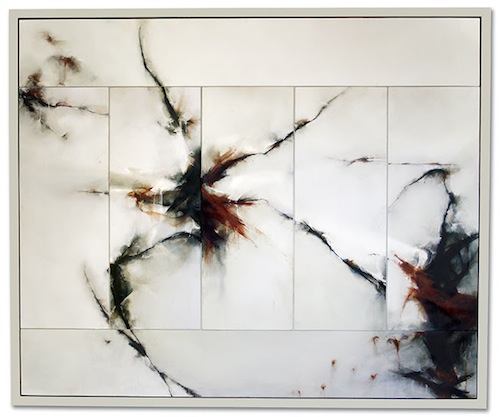 The Loss of So Many

The Loss of So Many, a solo exhibition by David Mellen, will feature works that question the idea of dimensionality and how a canvas can become a vehicle for more than just two-dimensional representation. Combining the sculptural and the painterly in Red Lies Body, Meter, Still Stand, and Into the Throats of Birds, Mellen creates a trapeze act between the flat and the three dimensional, between the placeable and the unidentifiable. The physical malleability of the sculptural parallels the impressionable subject matter.

Drawing inspiration from Samuel Beckett’s quote from the Endgame: “There’s something dripping in my head…A heart, a heart is in my head,” Mellen’s work allows us to access our own individual personality. Mellen’s paintings create complex algorithms of illusory and invisible correlations between visual interpretations and inner monologues. Endgame, a term referencing the final stage of a chess game when there are only a few pieces left on the board, corresponds to the intellectually prevalent game between the exhibition and the audience, between painting and viewer. The paintings’ titles characterize known physical and emotional attributes that are then contested by their visual gestures.

The Loss of So Many, like a chess game, demonstrates the complexity and never ending way to explore different endgames within our own humanity. Like chess pieces, these paintings serve as signifiers which allow the viewer to explore what drives us, breaks us, consoles us, what it means to be human on the way to the pursuit of happiness. These images, both abstract and familiar, are devised by the artist to make us rife with connotations of the physical and immaterial space of our everyday life, and the things we lose in between.

David Mellen attended the American Academy of Art. He exhibited his work in his hometown of Chicago until 1994, when he moved to Europe. He has exhibited both internationally and nationally, including a solo exhibition at Frey Norris Gallery in San Francisco and group exhibitions in New York and Chicago. Mellen has also been featured in international exhibitions in Paris, Brussels, and London, in institutions such as Kursaal Exhbition Center, Belgium; Centre de Cheques Postaux XV, Paris and APT Gallery, London.