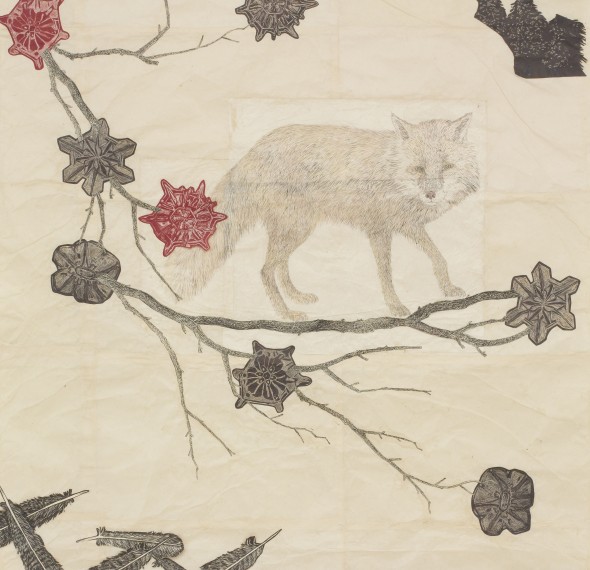 In a series of works from 2011 to 2014, Smith again explores the rich terrain of expressions of human and animal forms as well as celestial bodies and nature. Decay, rebirth, and eternal cycles of the seasons, nature, and eclipses recur throughout Kiki Smith: Wonder in works that illustrate Smith’s ability to move fluidly between materials with vastly different characteristics and properties.

Among the works in the exhibition are a series of sculptures, up to 13-feet across, of hoarfrost, the cyclically recurring crystallization of water vapor. Where artists for decades have rendered depictions of hoarfrost as decorations of landscape, Smith makes the ephemeral phenomenon the subject of works themselves. Fabricated from fine silver or stainless steel, the interlocking two-dimensional panels are arranged in seemingly random formations and reflect on the passage of winter to spring.

Smith’s current glassworks are seen in several major pieces that extend up to 16 feet across: Prelude, of felled trees, Raptor I and Raptor II, of birds in flight, and Rogue Stars, a series of eight stars made of opal white and antique glass. Although Smith has worked with glass for 20 years, she has refocused on the medium though recent public commissions, including her Art Production Fund installation of 2012, Kiki Smith’s Chorus, and the 16-foot East Window for the Museum at Eldridge Street / Eldridge Street Synagogue, both in New York and from 2012.

Lunar eclipses, shooting stars, moons, and orbs – of aluminum or bronze – are among the celestial works, some monumental, in the exhibition. Eden-like scenes are presented in a series of jacquard tapestries showing deer, a woman, fallen trees, and the fleeting intricacy of spider webs: images that suggest the majesty of nature, a subject reflected also in roughly 13-foot unique bronze sculptures,Crest and Crown.