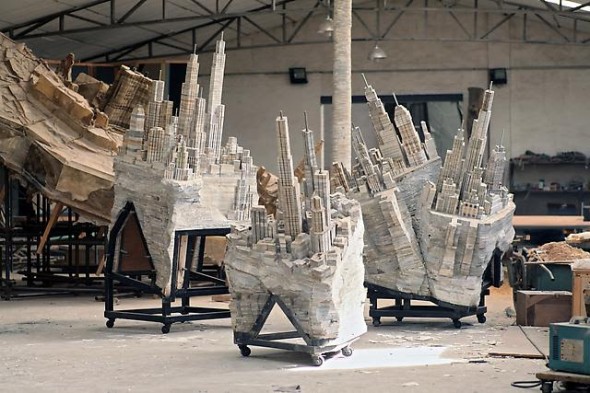 The 2014 Armory show also marks the US debut of Library II-II, the three-part sculpture by Liu Wei (b. 1972, Beijing, China) and the latest work in his Library series, which will be on display in the fair lounge.

Comprised of massive piles of books sourced from secondhand markets in Beijing, their paper carved into forms that resemble eroded cityscapes, Library II-II evokes a sprawling metropolis in a state of flux with its constant state of development and demolition rendering the city and its characteristic landmarks unrecognizable. His destruction of books to create these sculptures prompt ideas of censorship or oppression. Their compromised condition also serves as a metaphor for the conditions of the urban landscape, which the artist sees as broken and unreadable as a result of human intervention.

The selection of Liu Wei’s work is part of curator Philip Tinari’s special programming for the fair, organized in conjunction with the Focus: China section.

For more information on the fair and artists, please visit www.lehmannmaupin.com.