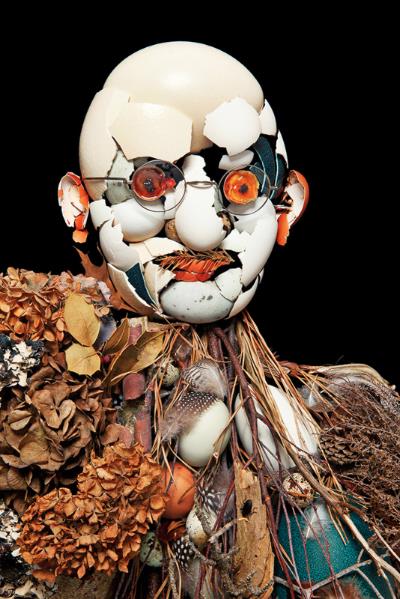 Rebecca Hossack Gallery presents Klaus Enrique: The Reaping, a solo show featuring works by New York based artist Klaus Enrique. A series of photographic portraits, Enrique’s creations complicate and investigate notions of the ephemeral. The exhibition will open on October 16 and close on November 6.

Utilizing materials such as fruits, vegetables, flowers, and animal remains, Enrique produces glorious human forms and captures them in a rare moment of ripeness, preserving the perfection that precedes inevitable decay. Enrique breathes new life into these forms, harvesting, reaping, and reconfiguring them as beautiful, often dark portraits.

Enrique’s work finds a foundation in the 16th century paintings of Giuseppe Arcimboldo. Using Arcimboldo’s work as a platform from which to build, Enrique adopts the painstaking task of recreating his imaginative portraits, whose beauty rest on the placement of a perfectly shaped pear, flower, or tree root.

While Arcimboldo studied his subjects through the medium of paint, Enrique mechanically captures his subjects in real time before they cease to be viable. Because of this, the surrealistic quality of Enrique’s work is juxtaposed with an important quality of realism, bringing to the forefront both the transitory nature of life, and the richness of a captured moment.

“Painting has the inalienable ability to create a fantasy completely removed from reality,” said Enrique. “Photography arguably lacks that trait, but in return it provides a picture of reality that the most consummate photorealist can hardly match. This series brings a fantasy back to life.”

Pushing beyond the realm of Arcimboldo’s scope, Enrique’s work has moved into the arena of contemporary visual culture through his reinterpretations of icons like Darth Vader, Princess Diana, and Ghandi. This has dramatically propelled Enrique’s work into the modern age, exploring new domains of darkness and nostalgia. The result is a body of work which exceeds the sum of its parts and speaks to the immense potential of living things.

Born in 1975, Klaus Enrique grew up in Mexico City. He studied genetics at the University of Nottingham, England, and received his MBA from Columbia Business School in New York City. Enrique turned to photography, while a student at Parsons School of Deisgn and the School of Visual Arts, and began to receive worldwide attention in 2007 when his portrait, Mother & Daughter, was short listed for the Photographic Portrait Prize at London’s National Portrait Gallery. Enrique had his first solo exhibition in 2008 and currently lives in New York City.