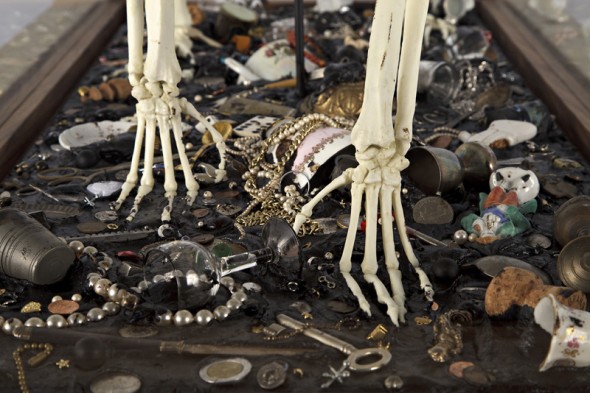 Tanya Bonakdar Gallery is very pleased to present a major upcoming exhibition of works on paper and new sculpture by Mark Dion.

Since the early 1990s, Dion has developed a remarkably dynamic and influential investigation of the visual representation of history, knowledge and the natural world. The artist’s practice, which includes sculpture, installation, photography, and works on paper, along with writing, teaching and institutional collaborations, explores historical practices of organizing and studying the world, and their influences on contemporary perceptions about nature. In doing so, Dion often subverts the traditional hierarchies and structures of power that frequently frame our understandings. With an edge of irony, humor and improvisation, the artist deconstructs scientific and museum-based methods of collecting, arranging and exhibiting objects by appropriating and incorporating them critically into his projects and exhibitions. From projects involving pseudo-archeological digs, to cross-country expeditions, to his own architecturally scaled wunderkammers, or cabinets of curiosities, Dion’s work continues to confront the inherent contradictions between the artifact and the context in which it is displayed for popular consumption. His spectacular collections and displays of ancient and modern objects reflect his own, fictive version of history, encouraging viewers to question contemporary institutions and popular ideologies that define today’s “official” story of nature.

Marking the artist’s sixth solo exhibition at the gallery, this show will present an extensive survey of over one hundred of Dion’s drawings, prints and multiples within both upstairs gallery spaces. Works on paper have remained a critical part of his practice, and many of these were created concurrently with Dion’s different projects and travels. Environmental concerns, the effects of industry and human negligence on the natural habitat, and our relationship to guns and hunting are just some of the issues that Dion has addressed in depth over the past twenty years, and which seem more poignant now than ever.

Trichechus manatus latirostris presents the skeleton of a manatee hovering in a glass vitrine over tar-covered trinkets. Here, Dion expands upon his concept of “The Tar Museum,” an idea that the artist has been exploring for nearly twenty years. Tar, obtained by natural decomposition of organic materials, most notably crude oil, has become a recurring motif in the artist’s work symbolizing the functional transformation of materials used in industrial products. Dion also makes reference to Joseph Beuys, who proposed that fat is a substance that binds energy and releases it into the world in order to provide energy for man and animal alike. In this work, Dion suggests that tar offers the radical opposite of this concept: altered by way of biotechnology, and despite its organic origin, tar consumes energy and releases it in combustible ways to negative and suffocating effects. Moreover, shiny trinkets refer to the trifles of material culture and the exchange of commerce in our modern world.

Many of these works also critically examine the development of our fascination with the sea as filtered through the lens of scientific discovery, history and cultural influences such as popular literature and design. In his work Encrustations, a collaboration with artist Dana Sherwood, Dion and Sherwood engage the viewer’s historical imagination as they explore the history of San Francisco’s Fort Point, a Civil War-era military fort located along the shoreline of the Pacific Ocean. While it still remains intact, the artists conduct what Dion describes as “fantastical archeology,” presenting a remarkable collection of barnacle-encrusted “artifacts” – everyday objects such as a spoon, shoe and trinket box – one might find in the fort if it had been submerged a century ago. In blurring the lines between artifact and art, natural and man-made, this work also reveals the role of imagination in constructing our own ideas about objective scientific and historical truth.

Similar politics of display are evident in Marine Invertebrates, another vitrine work that brings together models of undersea organisms and everyday household objects. As in his other collections, Dion combines these objects into his own, whimsical arrangements that resist immediate interpretation, instead inviting viewers to reconsider their own ideas of classifications and relationships, particularly between the natural and manufactured. Sea Life, a life-size replica of a vendor’s book cart, further deconstructs these popular interpretations by chronicling their presence in contemporary literature. Inspired by the wooden display boxes used by vendors on the banks of the Seine River in Paris, Dion’s cart contains a collection of sea-themed books and manuscripts, ranging from technical guides to marine biology textbooks to classic novels such as 20,000 Leagues Under the Sea and Moby Dick. Familiar titles recall popular stories about the sea, suggesting but a few of the cultural influences that continue to shape contemporary understandings and discourse about nature.

Dion also maps historical influences in The Documents through a series of papier-mâché sculptures that recall American explorer Sterling Clark’s expeditions to Northern China in 1908. In this work, Dion recounts this expedition under his own, critical lens, recreating a collection of objects the explorers would have either left behind or deemed too insignificant to record in their journals. The resulting sculptures reveal the subjectivity of history, a recurring concern in Dion’s practice that also emerges in the show’s largest work, Waiting for the Extraordinary. Inspired by the academic classifications invented by Michigan Chief Justice Augustus B. Woodward in the eighteenth century, this architecturally scaled installation presents a single room with thirteen plastic sculptures, each symbolic of one of Woodward’s professorships. As viewers enter the darkened space and encounter these illuminated objects, they confront questions about the distinction between the rational and subjective in our construction of knowledge, as well as role of the museum and institutions that continue to determine it.