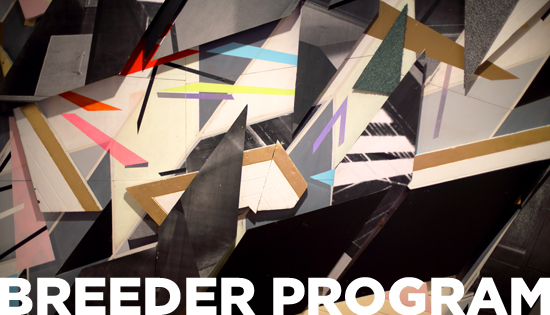 Recognizing the powerful voice of the curator, Breeder galleries are selected by a rotating panel of independent curators for each edition of SCOPE Art Show. The Miami 2012 edition of the Breeder Program met with critical acclaim. Organized by Brass Tacks, a culture engineering firm known for its far-reaching creative network, the curatorial panel selected an eclectic and intelligent selection of galleries from eight countries and 11 cities.

Many experiencing their first art fair, Breeder Galleries were astounded by the incredible exposure that SCOPE affords emerging artists. According to Andenken Gallery | The Garage, who sold out their booth and placed multiple works into the Granoff Collection, “This is a chance for us to be in front of the right eyes and SCOPE has done a superior job of getting the right eyes in here.” Baang & Burne Contemporary placed a work with actor Stephen Dorff, while Circuit 12 Contemporary celebrated fantastic sales and press, with artist Patrick Martinez chosen for the VH1+SCOPE Artists on the Rise series, resulting in an on-air profile of the artist and extensive press coverage, reaching over 2.8 million people through various social media channels. “The word is out about the fair and there’s so much positive feedback,” says Circuit 12 owner, Dustin Orlando.