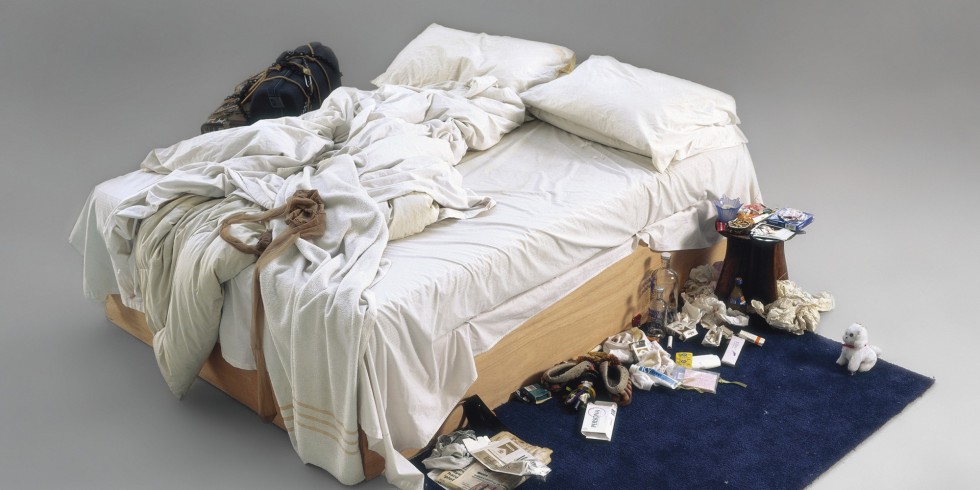 15 years after its debut Tracey Emin’s iconic installation ‘My Bed’ has returned to the Tate Britian, complete with the empty vodka bottles, used condoms and blood-stained underwear that made it legendary. A testament to the breakdown of a relationship, ‘My Bed’, like the former Young British Artist’s other early works, makes some people uncomfortable with its raw emotion. But is this glimpse into Emin’s inner life intensely personal and anti-establishment, or just an unrestricted example of a narcissist oversharing? Whichever side of the fence you’re on, it is hard to deny that ‘My Bed’ is a seminal feminist art work. A symbol of changing attitudes towards women that defined the 90s.

The fact that ‘My Bed’ is now placed alongside canvases of fellow tormented soul Francis Bacon signifies its importance to British history; an object that represents the transformative UK culture of the 1990s. The first time around in 1999, the infamous art work had to be closed off several times due to overcrowding, with both the art world and the British public divided over the piece. Louise Bourgeois may have invented confessional art, but Emin is the one brought it to popular focus, making it her signature. Through her autobiographical art she exposes intimate details others would be too embarrassed to reveal, such as her bout with genital herpes and various sexual encounters. Her work is not symbolic, Emin forces us to look square on at reality. In an era where it is still considered shameful to discuss women’s issues, where period talk is still considered disgusting and abortion is taboo, Emin’s work remains more important than ever.

Although applauded by many for blending the conceptual and the confessional, there has also been a misogynistic attitude directed towards Emin’s work, with many male critics unable to appreciate the issues she explores. ‘My Bed’ subverts feminine stereotypes by transforming harlot into heroine, and is not what society expects a typical liberated woman to be. The bed embodied a change in perception of female sexuality that was in line with third-wave feminism, with woman defining beauty and sexuality on their own terms. Emin is conscious of her audience and her appeal to young women in particular. When her directorial debut ‘Top Spot’ – which focuses on a girl struggling through adolescence – was certified 18 in 2004, Emin was bitterly disappointed the film couldn’t reach by the demographic it was designed to represent.

With so many other amazing and controversial feminist art works out there, what is it that has kept ‘My Bed’ in the popular imagination for so long? Although Emin’s persona is loud, rough and unpredictable, it also radiates vulnerability. Through ‘My Bed’ she is divulging not only her own struggles but the struggles many women face in the process of finding themselves. Many have accused her of pandering to the lowest form of voyeurism, but ‘Mad Tracey from Margate’ brought attention to issues that desperately needed it, and still do.