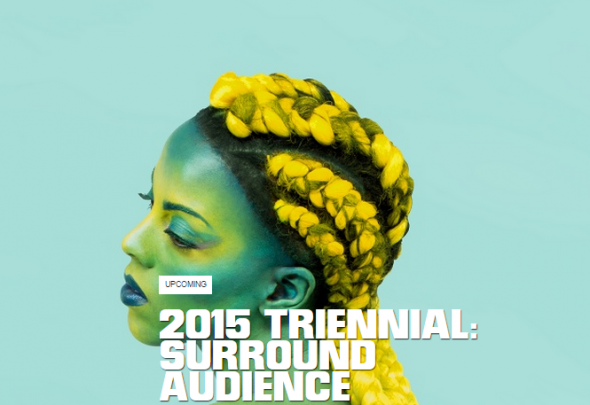 The New Museum Triennial is the only recurring museum exhibition in New York devoted to presenting works by early-career artists from around the world. The 2015 exhibition will be the third iteration of the Triennial, titled “Surround Audience” and is co-curated by New Museum Curator Lauren Cornell and artist Ryan Trecartin.

The building-wide exhibition will be on view from February 25 to May 24, 2015. It will feature fifty-one artists and artist collectives, from over twenty-five countries; for many of the participants, this will be their first inclusion in a museum exhibition in the United States. Cornell and Trecartin have worked together for nearly a decade and each bring a shared passion for probing the social and psychological effects of digital technology. For Cornell, “Surround Audience” is inspired in part by Trecartin’s own artistic practice, which, as she describes, “vividly manifests a world in which the effects of technology and late capitalism have been absorbed into our bodies and altered our vision of the world.” A tension between the new-found freedoms and threats of today’s society animates and anchors “Surround Audience.” Furthermore, the exhibition explores how artists are currently depicting subjectivity, unpacking complex systems of power, and claiming sites of artistic agency.