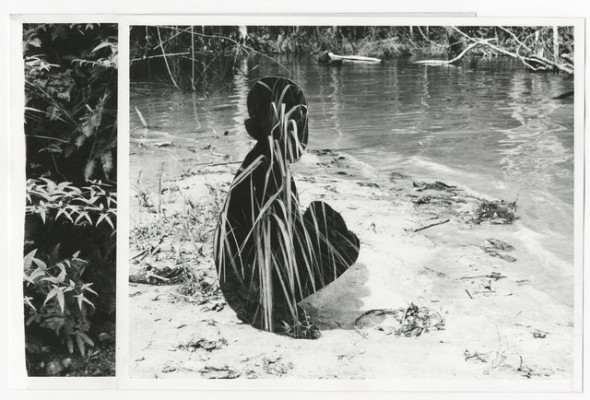 Paradise Row is proud to present a number of key works by Adam Broomberg & Oliver Chanarin from their recent series, ‘To Photograph the Details of a Dark Horse in Low Light‘ at Paris Photo 2012.

The title of this body of work was originally the coded phrase used by Kodak to describe the capabilities of a new film stock developed in the early 80’s to address the inability of their earlier films to accurately render dark skin.

Jean-Luc Godard famously refused to use Kodak film during an assignment to Mozambique in 1977, on the grounds that the film stock was inherently ‘racist’. In response to a commission to ‘document’ Gabon, Broomberg and Chanarin recently made several trips to the country to photograph a series of rare Bwiti initiation rituals, using only Kodak film stock that had expired in the late 1950’s.

Using outdated chemical processes Broomberg and Chanarin succeeded in salvaging just a single frame from the many colour rolls they exposed during their visits. This is presented along side an array of black and white photographic tests, whose parameters were dictated to them by a deceased family friend, an anatomist and amateur photographer, Dr. Rosenberg.

The work centers around a series of these partly exposed, haphazardly cropped proto-images, originally printed as test strips. The grey tones, grain and texture of black and white photographic chemistry are foregrounded in these outsized ‘darkroom’ experiments.

In this wide-ranging meditation on the relationship between photography and race, the artists continue to scrutinise the photographic medium, leading viewers through a convoluted history lesson; a combination of found images, rescued artifacts and unstable new photographic works.

0
The Untitled Magazine November 10, 2012
No Comments Yet