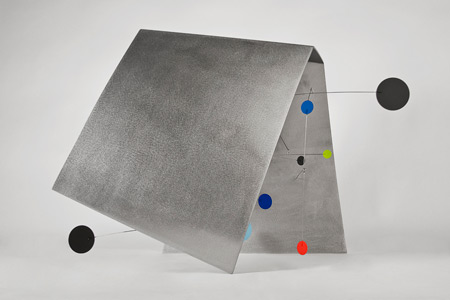 OPEN TO THE PUBLIC JANUARY 12 – FEBRUARY 9

Katherine Cone Gallery is pleased to present “Deprivato,” the gallery’s first solo exhibition of work by sculptor Brad Howe. The exhibition will run from January 12th until February 9th, 2013. Please join us for a reception for the artist on Saturday, January 12th, from 6-9pm.

Brad Howe’s reputation precedes him. One of America’s wittiest and most versatile makers of public art, a direct stylistic and spiritual inheritor of Alexander Calder and Joan Miró, a sculptor of broad formal range but consistently expansive spirit, Howe has delighted serious and casual audiences for several decades with series after series of artworks that seem to spring as much from Santa’s shop as from Brancusi’s. But however pervasive and persistent Howe’s exuberance, it has its serious side. From the first, Howe has always taken his calling as an artist – an abstract artist – quite soberly, seeking poetry no less than punch line in his bumptious, unpredictable formulations. And now he has stepped back to reassess, and to give vent to another voice he feels welling in him, a voice quieter, more reflective, more guarded than has ever before manifested in his work. It is still the voice of Brad Howe – you can tell that immediately in its grace, economy, and lingering hint of humor – but it is Howe’s still small voice, one that has rarely if ever found exterior expression until now.

To be sure, there is still a playfulness to these new objects, and the bright colors and eccentric shapes we associate with Howe’s style have not disappeared. They have simply retreated behind a partial barrier – hence the series’ name, “Deprivato” – giving them (and us) a chance to quiet down and move into a slower tempo. In doing so, they underscore Howe’s fealty to the language – the entire vocabulary – of modernism. Indeed, one of the considerations motivating Howe to this relatively restrained position is his abiding interest in predecessors such as Brancusi and Arp, David Smith and Ellsworth Kelly, shapers of three dimensions (as well as two) whose sense of form, of physical space, was prompted by their drive to find, admire, and work with the essence of shape. The sense of play lies a little less close to the surface in their work, and Howe wants to examine what happens when his own sprightliness recedes a bit, when it becomes a supporting player in his visual theater and lets more classic formal expression come to the fore.

The portmanteau name “Deprivato” also suggests a loss or lack, a diminution of some sort of energy. In this regard, Howe may be overdoing the self-effacement; even if we accept that this new sobriety is the expression of a man embracing middle age and its trials, we don’t see a waning of his gifts or of his ability to exploit them. On the other hand, we are being “deprived” in this series of direct, full-on access to Howe’s once-pervasive aesthetic of boisterousness. Behind the smooth, obdurate silver barriers of these new works lurk many of the same jocular presences that have populated Howe’s oeuvre from its beginning; we just no longer have direct access to them.

If you give it thought, however, these barriers are themselves rather coy, slipping and sliding around the shapes behind them so that we can glimpse these shapes, if only in part. This goes doubly for the corrugated Plexiglas boxes encasing some other, obviously hot-colored and oddly bent presences. You could say that the newly appointed guardians of Howe’s giddy creatures act like chaperones, keeping their wards in line and keeping their admirers at bay. But the silver walls and distorting encasements have their own sense of play, and are content to tease us by, in effect, lifting and lowering their veils.

This, then, is admittedly the art of a no-longer-young man. It bespeaks not the gratification of desire but its provocation. It also bespeaks not the revelation of wholes, but the contemplation of parts, of what can now be seen rather than what once stood, evident and unencumbered, before us. Brad Howe is not retreating behind so many elegant baffles; doubtless, some of his greatest, wildest, nakedest, most high-spirited monuments have yet to appear. But the veteran sculptor has now added a few new arrows to his quiver, ones that aim lower travel less far, and hit their mark almost by surprise. The important thing, of course, is that they are hitting their mark.