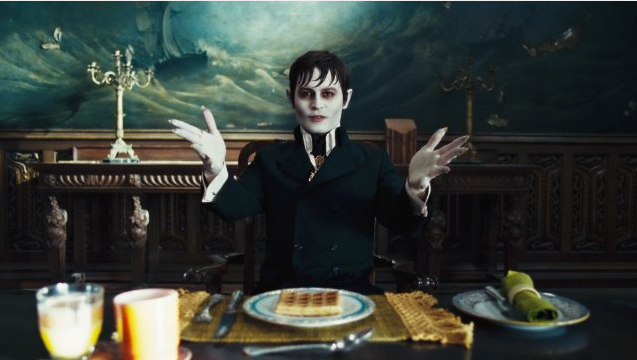 Dark Shadows is Tim Burton’s adaptation of the late 60s/early 70s gothic soap opera of the same title.  The original Dark Shadows is a melodrama that defined camp film style and has since developed a huge cult following.  The show blended soap opera theatrics with supernatural elements, low production value, and bad special effects.  Dark Shadows was the first soap opera of its kind, mixing romance and mystery with witches, ghosts, and vampires.

Tim Burton’s Dark Shadow follows suit, telling the story of Barnabas Collins (Johnny Depp), a vampire who has been buried alive for two hundred years, only to finally be released from his coffin in the strange, new world that is 1972.  In 1772, Barnabas was a rich, young, playboy whose family built a fishing cannery empire in the coastal Maine town of Collinsport, which they settled and named after themselves.  Barnabas, despite is lothario ways, fell in love with a young girl in the town, Josette DuPres (Bella Heathcote).  This infuriated his spurned lover, Angelique Bouchard (Eva Green), who also happens to be an immortal witch.  In a rage, Angelique sent Josette to her death, forcing her to walk off a cliff, and cursed Barnabas to eternal life as a vampire before sending him to his underground prison.  After Barnabas is finally released from his tomb, he returns to the family estate, Collinwood Manor, to find the house in shambles and the only four surviving members of the Collins clan living in poverty after the almost total collapse of their canning business.  The residents of the huge mansion now only consist of the Collins’, Elizabeth (Michelle Pfeiffer), her moody teenage daughter Carolyn (Chloë Moretz), Elizabeth’s thieving brother, Roger (Jonny Lee Miller), his ten-year-old son David (Gully McGrath) who speaks to the ghost of his drowned mother, and the doctor, Julia Hoffman (Helena Bonham Carter), and nanny, Victoria Winters (Also played by Bella Heathcote), who have been brought in to deal with David’s supposed mental illness.  Barnabas vows to restore their family name and regain the wealth and prestige that their family has lost due to a curse that seems to have been placed upon them.  But the Collins aren’t the only fishing business in town, for the past two hundred years Angelique has been hard at work single-handedly destroying the Collins family and winning the respect of the townspeople.  Angelique is still in love with Barnabas, but once again, he has already given his heart to someone else, this time to Victoria, who just  happens to look strikingly similar to Josette.  Barnabas is forced to fight against Angelique as the tidal wave of her wrath and jealousy threaten to take down his family and everyone that he loves once again. 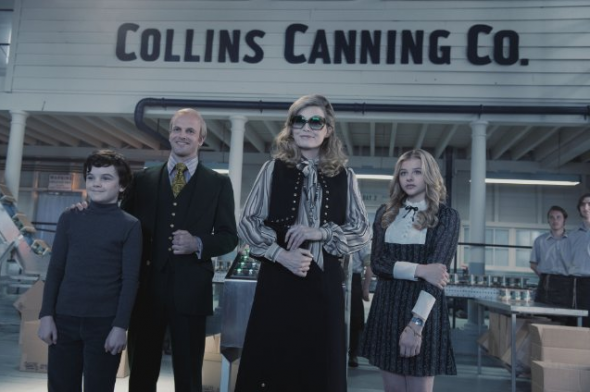 The film is a hyper-melodramatic interpretation of the TV series in Tim Burton’s usual over-the-top macabre style that loses focus on the elements that made the show so great.  Dark Shadows, on daytime television, took itself very seriously, much like this film, however, that seriousness combined with exaggerated, ham acting, a crazy plot line, and low quality production made the actors’ serious tone feel somehow tongue-in-cheek.  Tim Burton’s take loses all of the humor and levity that made the original an instant cult classic.  Burton dwells on the dark, supernatural plot line, completely missing where the real humor lies in the 1970s soap opera; relying on jokes that revolve around Barnabas as an anachronism and his attempts to hide his vampiric nature that are often cliche and hackneyed.  Burton’s Dark Shadows completely bipasses the cult camp style of the original, a surprising decision considering that Burton has been a pioneer of that genre since the beginning of his career as a director. Johnny Depp’s’ performance as Barnabas feels stale and contrived and the ridiculous makeup and hair do him no favors, only encouraging comparisons between this performance and every other highly costumed and over-produced film Depp has made with Burton in the past ten years.  The setting of Collinwood Manor in 1972 coastal Maine, however, is a beautiful choice that lends the film a moody grandeur underscored by the mysteriousness of the environs.  The combination of cool 70s rock with superb costuming, apart from Depp’s ridiculous Victorian inspired garb, guarantees that this film will be an artistic and sartorial reference in the years to come, much like many of Burton’s early films.  Dark Shadows has little more to offer than its aesthetic charms, but hopefully, Tim Burton’s big budget, theatrical remake will inspire a renewed interest in the absurd brilliance that is the original.