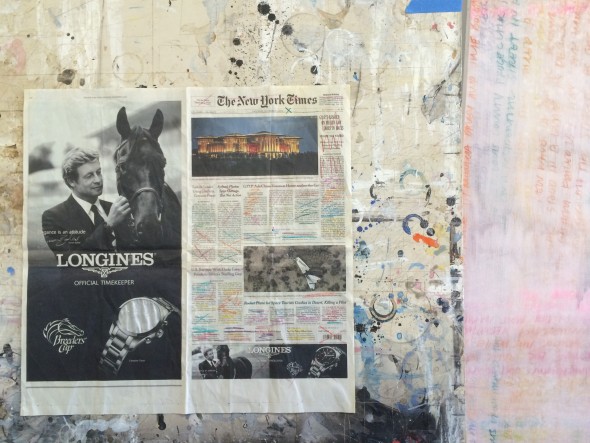 Jessica Silverman Gallery is set to exhibit a some of Dashiell Manley’s new paintings and sculptures in a solo show.  The show’s title, “Time seems sometimes to stop,” is from an essay by Hollis Frampton about the representation of time in Eadweard Muybridge’s photographs. Both Frampton and Muybridge are key figures for Manley as time is a longstanding theme in his work. In this exhibition, the artist explores the fleeting quality of the news, the historically specific medium of the newspaper, and the decline of print journalism in the digital age.

In his New York Times paintings, Manley inscribes all the words contained on the front page of a specific daily edition of the newspaper on the canvas. Using multicolored watercolor pencils, he writes vertically and horizontally, outside the strict layouts of the paper, taking the text into the realm of abstraction. After filling the canvas with text, he applies a layer of silver-tinted wash, obscuring the original meaning of the words further. In a climate where we are inundated with news that washes over us, the silver stain takes on a metaphorical dimension.

Like On Kawara, Manley engages in a daily painting practice but, unlike the late Japanese master, he never works from the current day’s paper. He prefers to wait a week to gain some critical distance. Newspapers are the fastest moving consumer good; their inherent value is precisely their newness. Instead of discarding “newness,” Manley recycles it, transforming old news into something new through transcription. It is an emotional project as he cannot help but engage with the content even as he writes it out of existence, often transforming trauma into beauty. At a time when analogue newspapers are facing extinction, Manley acts like a Medieval scribe oblivious to digitization, insistent on a laborious, manual writing process. In so doing, he brings a day’s news into a slower, more contemplative zone, counteracting fleeting information processing with timelessness.

While Manley’s paintings use the textual content of the newspaper, his sculptural objects are based on the layout of the front page, specifically focusing on the roles and shapes of the illustrations. The sculptures consist of numerous boxes made of glass, zinc and silver, which suggest vitrines that would traditionally contain objects. The size and arrangement of these objects directly correspond to the size and arrangement of the photographs on the front page. The ephemeral images have become solid, three-dimensional objects. The top of the sculptures’ pedestals correspond to the dimensions of the Times front page. Inlayed with mirror, the pedestals reflect the surrounding installation of paintings.

References to newspapers pervade the history of art from Juan Gris to Robert Rauschenberg to Marcel Broodthaers and Paul Thek. By embodying the front page in new forms, Manley encourages the viewer to rethink the experience of reading a newspaper. Both the paintings and sculptures explore the physicality and materiality of the medium and, through mirrors and interaction, create novel situational “news.”

HOLLIE COOK TALKS TROPICAL POP, HER NEW MUSIC AND GROWING UP WITH THE SEX PISTOLS