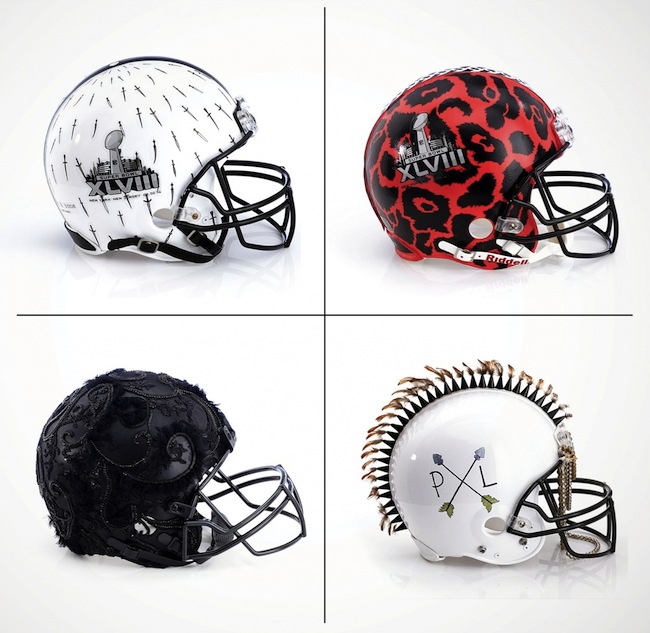 Tens of millions of people tune in each year to watch the Super Bowl – the halftime shows, the adrenaline-building touchdowns, the viewing parties, even the commercials all become part of the phenomenon. This year, in honor of the 2014 Super Bowl, forty-eight fashion houses have partnered with the Council of Fashion Designers of America, the National Football League, and Bloomingdale’s to create one-of-a-kind helmets. The football gear will be auctioned off to benefit the NFL Foundation, a non-profit organization that supports educational football programs, safety measures in sports, and community-driven health initiatives.

Famous symbols that indicate teams have been replaced by spikes, florals, faux leather and Swarovski crystals designed by the likes of Betsey Johnson, Helmut Lang, Marchesa, Badgley Mischka, and Bloomingdale’s.  On January 15th, Bloomingdale’s will unveil the helmets in the windows of their 59th Street flagship store in New York City as well as online – auction of the helmets will also begin the same day.

Frank Berman, executive vice president of marketing for Bloomingdale’s, spoke out about the unusual partnership,  “I don’t believe we have ever done a major collaboration with the NFL before this. Sports isn’t necessarily our strong suit. Certainly, players have made appearances for fashion labels, charities and special events. But there’s never been anything of this magnitude. The biggest piece is the collaboration with the NFL and CFDA.”

Bidding on the helmets will begin on January 15th and run until February 4th here.