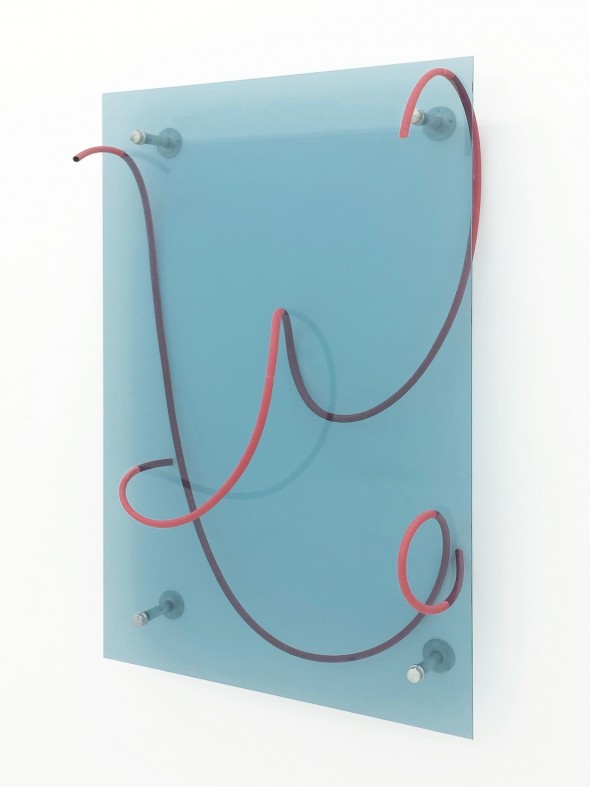 While Robarts has exhibited widely in group shows over the past few years, this will be his first major solo exhibition. The show at New York City’s The Hole will highlight three bodies of work by the material-driven conceptual artist, including scaffolding pieces, “line drawings” and “mop” paintings.

The “mop” paintings are made as you might guess; the artist “swabbing the deck” of the linoleum-covered panel with a mop on the floor, leaving his boot prints as the backs up to complete the job. The plaster is dragged around the black surface leaving both mundane and dynamic areas of white, a record of the task and its motions.

Robarts calls the wall-works of glass and garden hose “line drawings” because in a way, he is drawing with the hose, and the holes in the glass through which it weaves are just supports to hold up the line composition. Using Starphire glass, mirror and blue glass as a spatial armature, the artist composes drawings with red or green garden hoses that take on a diversity of effects from the subtle differences in composition and materials.

The scaffolding works will fill Gallery 3, stacked up to the ceiling, tipped over or hung on a wall like a canvas. For these works, Robarts riffs on Sol LeWitt wall drawings by using the arbitrary geometry of scaffolding parts to dictate shapes in the paintings. The assorted rectangles, squares and triangles made by the industrial scaffolding poles form a giant coloring book for the artist to color in.

The title “Run of the Mill” is meant to evoke both the quotidian and ordinary tasks captured here in artworks, the role that work plays in a “work of art”, and also perhaps the anachronicity of the phrase itself. Textile mills (to which this phrase refers) are lost to the industrial past in New York City and are no longer the vital centers of working class communities, representing an industry and a way of life wiped off the city map. The artist reflects often on the movement of people and communities in New York City—where artists are often the pioneer species before gentrification occurs—and meditates on the forces of preservation and improvement enacted upon everyday lives.