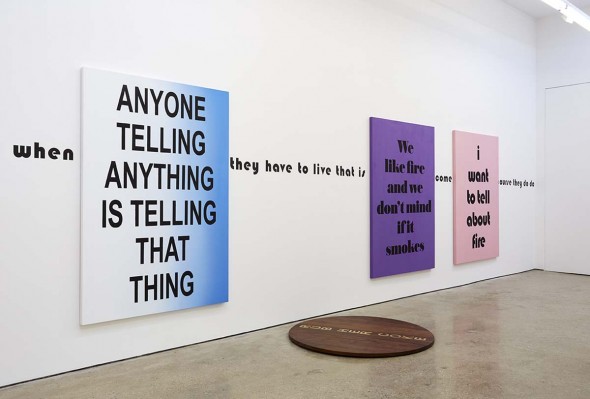 The Mier Gallery is currently presenting a solo exhibition, The Difference is Spreading, by Eve Fowler, a collection of works that incorporates typography and the words of legendary author Gertrude Stein.

Gertrude Stein (1874-1946), was an American writer of novels, poetries, and plays. Her residency at 27 rue de Fleurus in Paris is what gained her notoriety, which “brought together confluences of talent and thinking that would help define modernism in literature and art”. Many famous artists and writers attended The Stein salon, such as Pablo Picasso, Ernest Hemingway, F.Scott Fitzgerald, Thornton Wilder, and Henri Matisse.

This exhibit is a collection of works that reflects a five-year long project, collecting excerpts of Gertrude Stein’s work and making them into visual art. Snippets of Stein’s words are pasted on canvas and other mediums in the form of poster, wall decals, and other mixed media. She singles out various phrases for us to look at–the ones she wants us to ponder. The exhibit emotes chaos and entanglement with scattered words all around.

For Fowler, her engagement is at once “syntactical, visual, haptic, lingual––each form of perception sliding over and upon each other, privileging none. Her work with the texts remains in some intrinsic way true to her photographic practice, one in which she singles out elements of Stein’s word-world for us to look at, to take into the mouth, to feel.”

For more information and photos of the exhibit, click here.