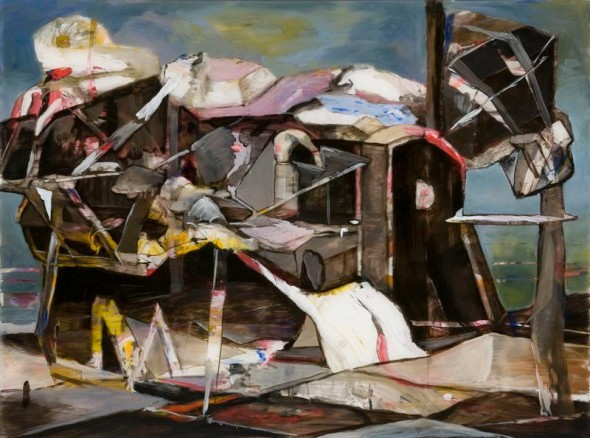 FRESH BRED is a look at a new generation of artists whose work stems from Conceptual Art, Light and Space, Abstract Expressionism and Performance Art in a variety of media that offer fresh takes on old styles and modes of working. The artists represent a cross-section from San Diego, as well as national artists.
Mike Calway-Fagen’s collages are seemingly removed from reality, an effect that he attributes to his critique of the current state of complacency in American culture. The images reference a by-gone era, a time of activism and movements, the 1960’s. Calway-Fagen currently lives and works in San Diego, CA.
Joseph Huppert takes on balance between light and space in his work where texture and finish are important. In his new drawings, Huppert’s only physical marking on the paper is made with the blade of a knife. The cuts in the paper reveal complex patterns and tense lines that pluck at the viewer’s perception of what is and is not being seen. Huppert currently lives and works in San Diego, CA.
Francesco Longenecker’s paintings take anthropomorphic shapes and place them in surreal landscapes. His new series of paintings use both the back and face of plexiglass, a technique called Verre Églomisé. His paintings reveal a deep and colorful abstract landscape, using fleshy colors reminiscent of the work of Cecily Brown. Longenecker currently lives and works in Brooklyn, NY.
Lee Materazzi uses her body to manipulate her photographs (as opposed to giving in to digital manipulation). In her newest series she explores the thin line between finding oneself and losing oneself. She references artists like Charles Ray and Anna Mendieta as she “attempts to achieve a resolution of the body’s role within contemporary art.” Materazzi currently lives and works in San Francisco, CA.
Timothy Neill’s objects are made to question a utopian suburbia, in which he “seek(s) to confront the notions of ideological stability within dominant cultural modes of thought.” He will present a 15 foot fallen column, composed of fiberglass and wood and covered completely in salt, which acts as a catalyst for both preservation and entombment. Neill currently lives and works in San Diego, CA.
Ali Silverstein is a painter and filmmaker whose rich canvases speak to the viewer through visual keys like language would in film. Based on observation, her abstract canvases are reminiscent of Helen Frankenthaler and border the lines of abstraction and representation. Her work examines perception Silverstein currently lives and works in Taos, NM.
Both Materazzi and Silverstein have been inspired by the writings of Rainer Maria Rilke, an Austrian poet from the turn of the 20th century who helped the literary world transition from the traditional into modernism. Calway-Fagen and Neill explore the different landscapes of American culture and compose objects that question the future of such a culture. Looking to their art historical and theoretical predecessors, Huppert and Longenecker work on moving forward in their respective ideas and modes. The exhibition is a culling of concepts and genres from a promising group of emerging artists.